Gallery 6, Islamabad, celebrates its 10th anniversary by organizing a unique exhibition based on artworks done by 13 artists on stories, writings, paintings, sculptures, prints, and the miniature of Manto.

Gallery 6, Islamabad, was established in March 2008 and is now celebrating its 10th anniversary by organizing a unique exhibition “Jub Manto Se Meri Mulaqaat Hui”. It is based on artworks done by 13 artists on stories and writings of the well-known writer Manto, which includes paintings, sculptures, prints, and miniature. 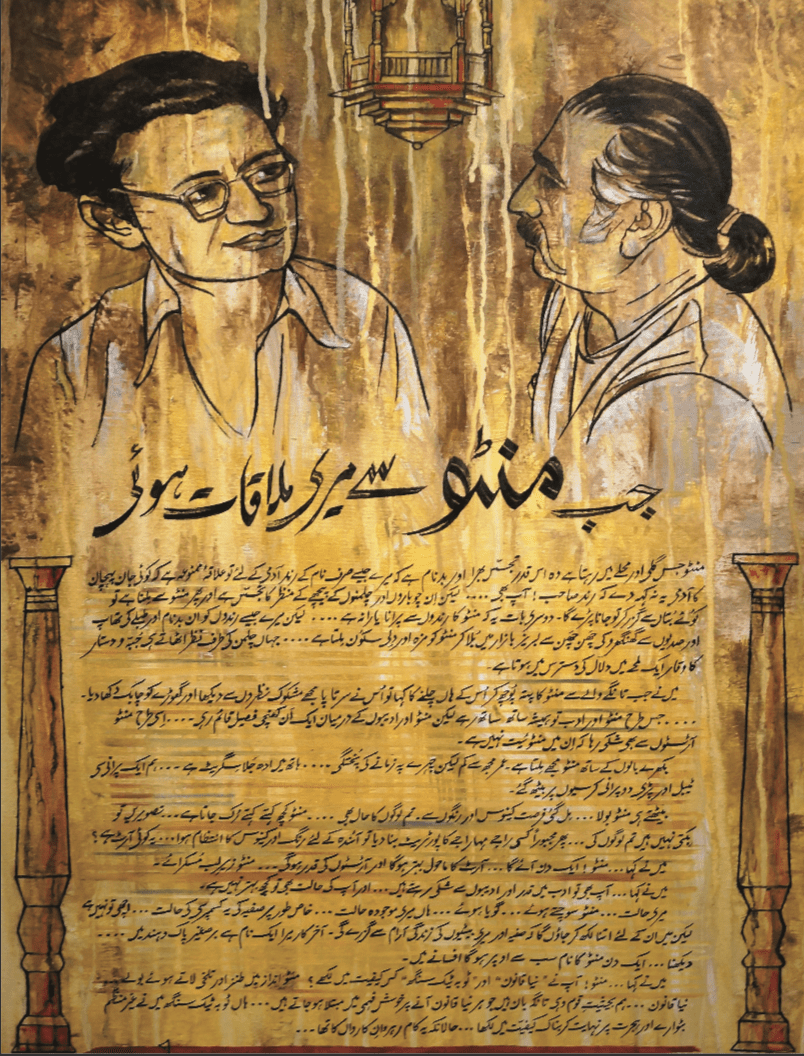 Discussing the exhibition, Dr. Arjumand Faisel, the curator of the Gallery said with beaming eyes that, “we decided to celebrate our tenth anniversary by paying tributes to a heroic literary figure through visual arts”. Manto, the bold and unorthodox writer, was the undisputed choice.

He has created numerous stories and characters that come to life and leaves unerasable marks in mind like Leonardo’s Mona Lisa, Munch’s Scream or Sadequain’s cacti like human figures. He gave the challenge to selected artists who work in different genres and with diverse mediums to present their interpretations of Manto’s writings, stories and their characters and their outstanding works are now adorning the gallery walls.

The exhibition endorses the Curator’s happiness and excitement as the experimentation has been very successful. It not only has the variety of genre and mediums but also the interpretation of Manto’s writings and stories. Presentation includes characters from thirteen stories (License, shikari aurtain, hattak, boo, kuch aur kehnay ki zaroorat anhi, boo, blouse, Toba Tek Singh, thanda gosht, kali shalwaar, artist loag, baghair ijazat), artworks based on writings like uncle Sam ko khat or discourse on two-nation theory, and also on the spirits and concepts of writings of Manto as perceived by the artists. 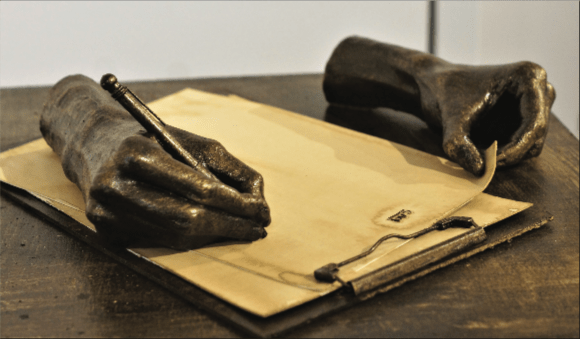 On entering the hall one gets struck by the sculpture “Letter to Uncle Sam”, which is placed in the center and is jointly made by the couple Muhammad Sajjad Akram and Sana Zara, who are gaining increased recognition for their contribution to arts.

The eyes are then drawn towards the large outstanding paintings ‘Khuli Dukaan’ and ‘Saadat Hasan’ by Irfan Gul Dahri, who won the first prize of Arjumand Award in 2017. His both paintings are not only appealing but also thought-provoking.

Read More: Manto – A film about Rebellion and Freedom

Mughees Riaz’s artworks are based on the story ‘Kali Shalwaar’ through a man’s or a hunter’s desires in a very interesting manner. Masood A. Khan’s imposing work ‘Thanda Gosht’, is made by grout on board, which is a form of concrete. He is the only artist in Pakistan who works with this medium with great command over composition. 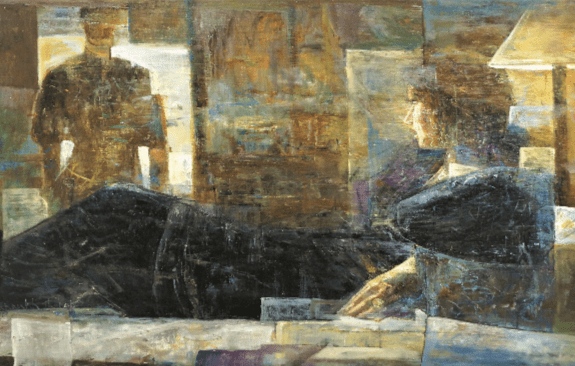 Rind’s thought-provoking conversation with Manto and Ali Azmat’s striking use of red for his conceptual compositions are remarkable. Abrar’s Chalaak ‘Aurtain’ is conspicuous by distinct deviation from his usual work, while Farrukh Shahab has made ‘Jamila and Mahmood of Artist Loag’ in a fascinating way in his current style of work. But his painting titled ‘kali Shalwaar’ is simply stunning and it appears as if the painting is several decades old and was made in that time when the story was written.

One also observes a very interesting difference in interpretation of the character ‘Sougandhi of Hattak’ by two artists belonging to two different generations and working in different mediums – Irum Wani and Arjumand Faisel.

Both create their impact in the exciting way of treatment. Zaira Ahmed Zaka has used etching, aquatint, and chine-colle in an impressive way to present her impressions of the story ‘Baghair Ijazat’. Shiblee Muneer’s both miniature paintings on Dou Qaumi Nazriya are also striking. 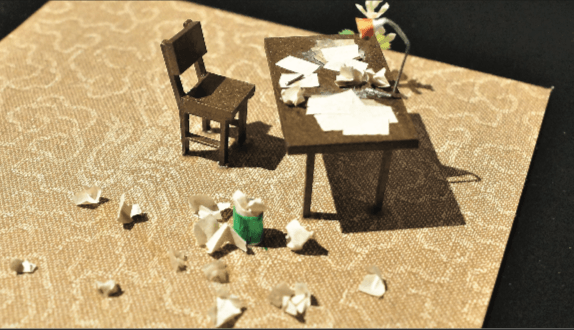 Usama Arjumand, Director of the Gallery describing its accomplishments stated that over the last 10 years we have organized more than 100 activities. Besides this being the 85th exhibition in Islamabad, we have organized painting exhibitions outside Pakistan (USA, India, and Australia), Annual Art Bazaars, book launches in different cities (Islamabad, Karachi, and Lahore), art residency in Swat and Annual Arjumand Painting Awards for the new and emerging artists since 2015.

This extraordinary exhibition will remain on display till March 20, 2018, from 11 am to 7 pm and should not be missed by art lovers.

FBR freezes all bank accounts of Aima Baig, but what did...

News Desk - 20 January 2022
The Federal Board of Revenue (FBR) has frozen all the bank accounts of singer Aima Baig over charges of tax evasion. FBR attempted to recover...

FBR freezes all bank accounts of Aima Baig, but what did she do?

Will Saba Qamar appear in a movie on Kulbushan Jadhav?