JUI-F is reportedly supporting the PTI’s candidate in an upcoming by-election. The PPP has accused the JUI-F of dual policy and demanded clarification when Maulana is posing to lead the "Azadi March" against Imran Khan. 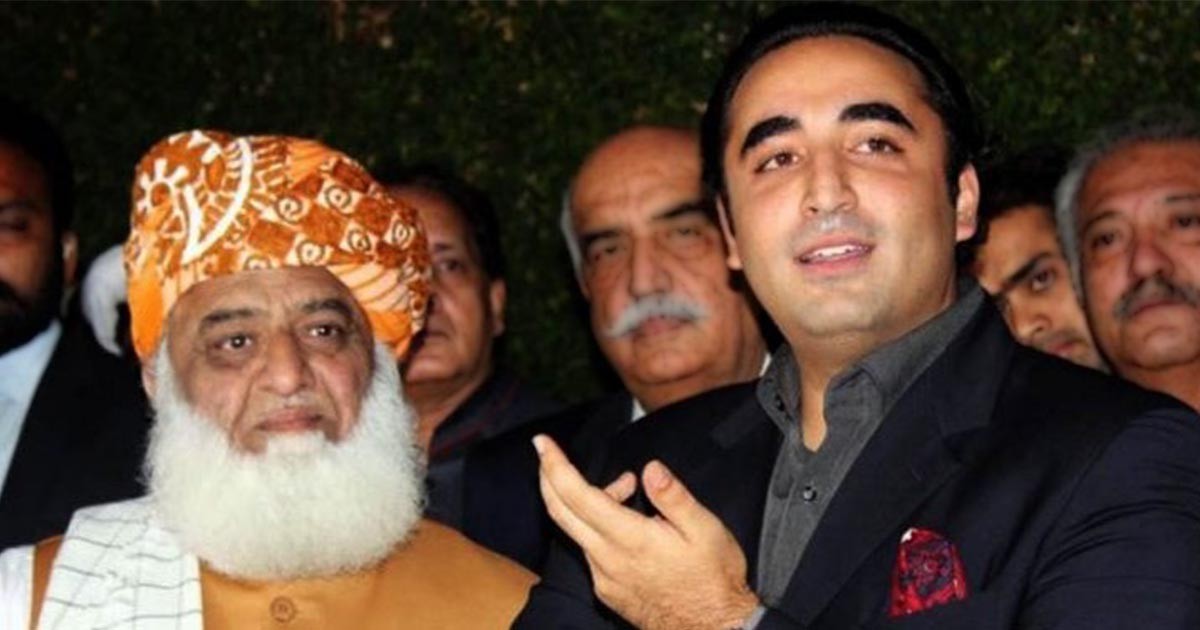 Once again Pakistan People’s Party (PPP) and Jamiat Ulema-i-Islam (JUI-F) are accusing each other of double standards and dual policy. Since the JUI-F is likely to support the Pakistan Tehreek-i-Insaf (PTI) candidate in an upcoming by-election (PS-11) on October 17. The development has irked the PPP which has now demanded clarification from the JUI-F’s senior leadership.

According to details, President of the PPP’s Sindh chapter Nisar Khuhro through a video message expressed his surprise over the JUI-F’s policy of opposing the PTI at the Centre and supporting the same party in the province, saying this policy did not match the stature of Maulana Fazlur Rehman. “I am daring to ask this question from (JUI-F chief) Maulana Fazlur Rehman. Are you with the PTI or against it?” Mr. Khuhro said.

Cracks within the opposition ranks have started surfacing ahead of the anti-government long march.https://t.co/2EjQwYCEmc— Dawn.com (@dawn_com) October 15, 2019

Mr. Khuhro went on saying that “It is a dual policy of the JUI-F to be the PTI’s opponent at the Centre and an ally in Sindh. The PPP Jiyalas (activists) are angry and frustrated because of the dual policy of Maulana Fazlur Rehman”. He asked that Maulana should answer if the local leadership of Larkana was acting on its own and in violation of the party’s discipline or was it in line with the party policy.

The relationship between the two parties have been unclear. PPP initially decided not to be part of any movement against the government using the religion card. Later on, it announced to support the same anti-government campaign. Both parties have accused each other of dual policy.

JUI-F’s information secretary Hafiz Hussain Ahmed openly criticized the PPP over its stance on the long march issue. “The PPP has adopted double standards. On the one hand, it considers our long march unconstitutional and illegal and on the other, it is extending moral and political support to our protest,” he said.

“The problem with the PPP is that those who are in jail want to come out and those who are out of jail do not want to go to jails,” Mr. Ahmed said.

Read More: Defeat at home: PPP refuses to be part of anti-government March of JUI-F

When asked about the PPP’s allegation that the JUI-F leadership was using “religion card” during the planned anti-government protest, Mr. Ahmed said the JUI-F had never criticized the PPP for always using the “Sindh card” in politics.

“Did Quaid-i-Azam not use the religion card during the freedom movement? Is making a demand that the Constitution be implemented in letter and spirit unconstitutional?” he asked.

Speaking at a news conference after presiding over a meeting of the party’s core committee in Islamabad on Sept 19, Mr Bhutto-Zardari had ruled out the possibility of joining the long march.

But ultimately the PPP chairman has become the part of the campaign targeting the government on religious grounds. However, the latest allegations of the PPP against the JUI-F are serious and the time will reveal what happens next.

After Nawaz and Zardari, Khursheed Shah shifted to hospital

How Easy it is to Steal Bike in Karachi? All it Takes is ’13 Seconds’