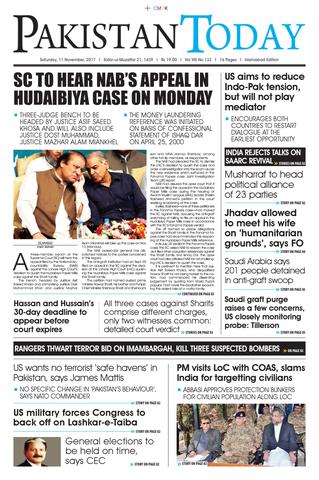 Justice Asif Saeed Khosa, on Monday, recused himself from the hearings for the reopening of the Hudaibiya Paper Mills file, on the basis that he had already expressed his opinion in the Panama verdict and asked the Chief Justice of Pakistan Mian Saqib Nisar to set up a new bench to hear the case.

As soon as the court proceedings started, Justice Khosa, who was appointed to head the bench, distanced himself from the case and said, “I think the registrar’s office made a mistake by putting this case on my roster as I have already written 14 paragraphs on this matter in the April 20th Panama Papers verdict.

I think the registrar’s office has not read my Panamagate verdict. In it, I even gave my ruling on the matter as far as Ishaq Dar is concerned. Ishaq Dar was one of the people accused in the case, and then he turned into an approver. However, once the previous verdict in the case is going to be rendered void, Dar’s status as approver will also end”.

Experts opined that nothing in law forbids a judge from not hearing a case in which his/her presence might give an impression of partiality and prejudice.

While approving the NAB prosecutor’s request of hearing the case next week, Justice Khosa sent an application to the chief justice asking that a new bench be created to hear the case.

Ishaq Dar’s confessional statement made on April 25th, 2000 became the basis of the initiation of Hudaibiya Paper Mills money laundering case. Dar admitted to his role in laundering $14.86 million of the Sharif’s money through fictitious accounts.

While Nawaz Sharif was not named in the interim reference filed in March 2000, in the final reference against the Hudaibya Paper Mills — approved by then chairman NAB Khalid Maqbool — the bureau had accused Nawaz Sharif, Shahbaz Sharif, Abbas Sharif, Hussain Nawaz, Hamza Shahbaz, Shamim Akhtar, Sabiha Abbas and Maryam Nawaz.

Dar was, however, pardoned by NAB chairman at the time and neither Musharraf’s regime nor PPP’s government took measures to ensure the conclusion of these references. On March 11, 2014, Lahore High Court referee judge Justice Sardar Shamim quashed the reference on the grounds that if a re-investigation were allowed against the Sharif family, it would provide an opportunity for investigators to fill in the gaps.

In 2014, NAB decided not to challenge the high court’s decision. However, soon after the Panama verdict, NAB appealed to the apex court against the Lahore High Court’s 2014 decision to acquit Nawaz Sharif and several members of his family in the Hudaibiya Paper Mills case “in the interest of justice, fair play and equity” and urged to declare the LHC judgment void and illegal.

NAB took the stance that when the Panamagate joint investigating team (JIT) formed to probe corruption allegations against the Sharif family in the long-drawn case had collected further incriminating evidence relating to Hudaibiya Paper Mills, “NAB cannot be debarred/restrained from proceeding further with the investigation.” NAB also stated that the JIT had recommended that the Hudaibiya Paper Mills Case should be reopened.

Based on these recommendations, the SC in its July 28th verdict in the Panamagate case, while questioning the dubious role of NAB, also asked the bureau to reopen the case while it filed references in other cases.

Reaction from legal and political community

Top legal experts in the country and bar association have commended this decision of Justice Khosa in which he has set a new standard of excellence. Experts opined that nothing in law forbids a judge from not hearing a case in which his/her presence might give an impression of partiality and prejudice. Hence, his decision not to be a part of Hudaibiya case has raised his stature and will restore public confidence in the judiciary.

Ishaq Dar was one of the people accused in the case, and then he turned into an approver. However, once the previous verdict in the case is going to be rendered void, Dar’s status as approver will also end”.

Political analysts think that by refusing to be a part of the Hudaibiya reference, Justice Khosa has exacerbated problems for the Sharif family, since their line of defense would have revolved around the presence of Justice Khosa in the bench, accusing him of being biased against them. They added that the replacement of judge would not allow the Sharif family to cite such technical issues to delay the case or malign the judiciary.

Read more: Any hope from JIT for Justice?

They opined that since the initiation of the Hudaibiya case, the facts of this case have never been heard i.e. who opened fake accounts in the name of Qazi family, how money was sent abroad and how it was sent back to Pakistan. These questions have never been asked in the court of law and the defendants have always been able to evade justice by citing procedural issues. This decision of Justice Khosa will deny them this opportunity.

Who “actually” allowed Nawaz Sharif to leave for London?

Plan B of Maulana Fazlur Rehman