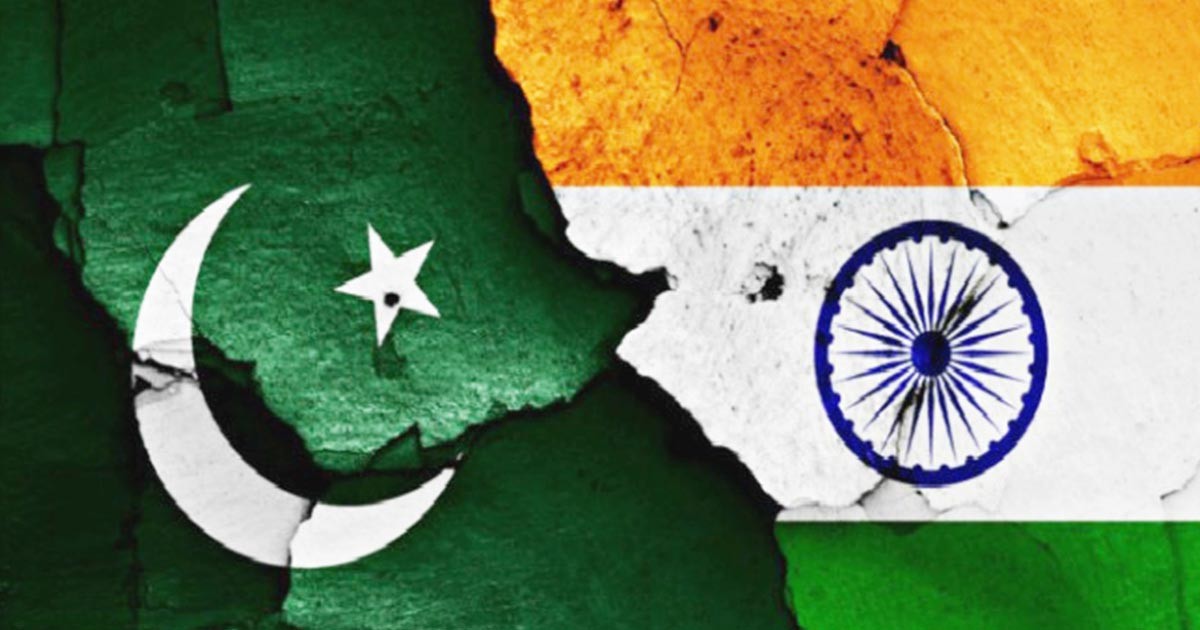 Iltija Mufti daughter of former Chief Minister of J&K Mehbooba Mufti appeared on a NDTV program (https://www.ndtv.com/video/news/the-big-fight/omar-abdullah-mehbooba-mufti-slapped-with-psa-violation-of-democracy-or-essential-for-normalcy-540116?livevideo-top-shows ) where she tried to give an impression that she is worried about her mother (who along with another former Chief Minister of J&K Omar Abdullah has been booked under PSA) and about generally what is happening in Kashmir to others since last 6 months.

(i) The present can be improved only when recent history and the coming future is kept in mind which is as given below:

Read more: Military siege in Kashmir: Can Pakistan and India go to a war?

(A) As far the relevant history is concerned, no pre-partition Indian leader (Gandhi, Jinnah Nehru etc) wanted theocratic country but Jinnah (who was initially in Congress and was projected as a symbol of secularism) demanded Pakistan for Muslim majority areas. Because he and his party, the Muslim League, believed that Congress party did not and could not (with some justification due to Gandhi using techniques, emotions and imagery of Hinduism in politics that too later on without being a member of Congress party) practice secularism. Hence Jinnah claimed a separate state where he would impose secularism (which is evident from his August 11, 1947 address to Constituent Assembly of Pakistan). It is a different matter that Jinnah too was swept away by the gory developments on both sides of the border.

Negligence of government of India for the last 70 years (by not carrying out plebiscite as per IoA) has not only created chronic & bloodstained Kashmir problems which have caused immense loss of lives, blood, properties and honour in J&K

(B) Riots including communal riots do happen and can happen anywhere but if displaced persons (due to these riots) are not rehabilitated in their original place then it emboldens communal forces which destroy secularism. This is precisely what happened when 20 % Hindus were allowed to be expelled from both Pakistan (earlier West Pakistan) and Bangladesh (earlier East Pakistan) by granting them citizenship in India (under unethical & illegal Constitution and laws of India) which tantamount to illegal population transfer because it was not the mandate of the partition (hence no provision/preparation was made by Britain for population transfer in ‘Independence of India Act’). Similarly, it happened with Muslims who went to Pakistan from India (though 20 % of Hindus were wrongly forced out from both Pakistan and Bangladesh whereas Muslims gained some increase in India to about 15 %).

(C) Though after 72 years it is not feasible to rehabilitate these displaced persons (including 80 million Hindus the 20% of the population of present-day Pakistan and Bangladesh). But unless these 80 million Hindus are given dual citizenship (one for India and other for Pakistan / Bangladesh) (and similarly for Muslims who went to Pakistan and their children) this high handedness of communal forces can never be eliminated from Indian subcontinent hence obviously otherwise no peace is possible in this region. Due to this wrong (un-martial) policy of India, the Muslim majority Kashmir got so emboldened that it forced out hundreds of thousands of Hindus (Kashmiri Pandits). India (at the time of partition) should have made clear that every refugee in India (mainly Hindus) will have to be taken back and proper security has to be provided by East & West Pakistan for these religious minorities otherwise India will be liable to negate the partition (India should make it clear even now about Hindus who would gainsay dual citizenship).

(ii) As for the future, whether people like it or not the world is bound to usher in “New Horizon for Mankind” (NHM) as given below:

Read more: India’s Actions in Kashmir are Unacceptable, US must Intervene: Bernie Sanders

(a) In another few decades with new developments  in science & technology [especially in artificial intelligence (AI), thinking machines (TM), robotics (RT) etc] not only very few people will be able to produce enough for entire mankind but the space and some planets are also going to be inalienable part of human life. It will require human beings to behave as a single community and different countries would only be a political arrangement of global world order to provide peace, prosperity and freedom to every human being on earth and on other planets. This coming of NHM is evident also from the fact that on February 4, 2020, in his ‘State of the Union Address,  Trump announced about ‘Space Force’ and ‘Moon & Mars Plans’.

(b) The NHM will require secular democracy in all the countries because modern-science & technology came into existence in the West only after hundred years of religious war in Europe (from 16th to 18th century) which brought the separation of State and religion. All religions came before modern democracy of universal adult franchise hence the values of modern democracy and all the religions are in conflict. Presently every human being is important. In this age of modernized science & technology (which has brought unprecedented power, prosperity and even comparative peace to entire mankind) every human being has a potential to contribute in one way or the other in this scientific world.

Therefore in view of the above, if Iltija and other Kashmiris are really serious about solving Kashmir problems, then Kashmiris should do the following:

(1) A Writ petition should be filed by Kashmiris in J&K High Court /SCI – [for restoring Article 370 & 35-A of the Constitution, for repealing AFSPA, SPA (as a result for releasing people arrested under these) and for enforcing plebiscite in united J&K as per the mandate of ‘Instrument of Accession’ (IoA)]. Pleading that the State of J&K is not like the other States of India and is not an integral part of India rather its fate as per IoA of October 27, 1947, is legally expected to be decided by plebiscite. Till then Article 370 & 35-A of the Constitution are necessary temporary constitutional provisions which should be kept intact (for keeping J&K outsiders-free in the interest of free & fair plebiscite and for running J&K politically, legally and administratively as per the wishes of the people of J&K).

Iltija and other Kashmiris would be living in the ideal world of their own making if they think that merely by above mentioned ‘Zabani Jama Kharch’ (lip service, paperwork and other civil measures), the Kashmir problem will be solved

(2) It should be mentioned in this writ petition that the negligence of government of India (GoI) for the last 70 years (by not carrying out plebiscite as per IoA) has not only created chronic & bloodstained Kashmir problems which have caused immense loss of lives, blood, properties and honour in J&K. The GoI through its security forces has been showing ‘bravery’ by the using force to quell the protests against it under the protection of AFSPA, SPA etc. Now GoI has also denied human rights / fundamental rights of the people of J&K since August 5, 2019.

(3) The Kashmiris along with other Indians (especially Punjabis and Bengalis whose parents were displaced from Pakistan and Bangladesh) simultaneously should be mobilized by Iltija to file a writ petition in Supreme Court of India (SCI). (a)- For making a declaration that ‘Population transfer’ is against the mandate of partition of India and against Secular Constitution of India (b)- For directing GoI to identify 80 million Hindus from Pakistan & Bangladesh and to work for giving them dual citizenship (one for India and another for Pakistan or Bangladesh) (c)- For directing GoI that if any such displaced person from Pakistan or Bangladesh (of any religion) want to come back to India then they should also be given dual citizenship. Iltija and other Kashmiris should persuade the people of AJK-Gilgit-Baltistan (and through them other Pakistanis) to file similar writ petitions in their High Court and Supreme Court of Pakistan.

(4) Iltija and other Kashmiris should take the lead to mobilize the people of the Indian origin, Pakistan (including united-J&K) and Bangladesh living in the USA to launch an NGO in USA for lobbying for plebiscite in united-J&K the issue of dual citizenship as mentioned above.  This NGO can carry-out demonstrations, seminars, meetings etc in the US. It can approach the US Congress and its relevant Committees, the US Administration and can contact diplomats of various countries to work out a plan for the resolution of this issue. The government of UK should be approached under the watch of which it all happened, despite the fact that they knew about the hurdles of an unfinished partition agenda ahead. The NGO can move the United Nations (including UN human rights organizations) and the influential US media to compel world powers to search out a better solution for Kashmir. It will obviously help the cause immensely as it will be very effective in this year of the presidential election in the USA.

(5) But Iltija and other Kashmiris would be living in the ideal world of their own making if they think that merely by above mentioned ‘Zabani Jama Kharch’ (lip service, paperwork and other civil measures), the Kashmir problem will be solved. Iltija and other Kashmiris should also understand that the prominent leaders of another side of J&K (including the AJK President Sardar Masood Khan and the Prime Minister Raja Muhammad Farooq Haider Khan ) are playing smart and are giving merely lip service to the cause of beleaguered & harassed people of Kashmir valley. Therefore Iltija and other Kashmiris should persuade the people of AJK-Gilgit Baltistan (including their Government & State functionaries and leaders of various fields) to take-up non-violent peace-march of at-least 2 million people from AJK / Muzaffarabad to Srinagar (for surrendering to Indian authorities) for getting the human rights of the people of Kashmir valley restored. If authorities of Pakistan stop this peace-march at LoC / border, then first they should fill the prisons of Pakistan.

(6) It will be immensely beneficial for the cause if the people of J&K (especially from valley including Iltija) also join the said peace-march from AJK to Srinagar if the people and leadership of AJK can arrange their visa to Pakistan / AJK. Also, Iltija and Kashmiris along with other Indians should carry out repeated demonstrations at Jantar-Mantar Delhi for the realization of said demands.

It is hoped that instead of suffering for another 6 months and more, Iltija Mufti and other Kashmiris will take the lead for Kashmir solution by mobilizing the people of AJK-Gilgit-Baltistan & USA and by levelling up military power through UN and the judiciaries of India & Pakistan, as mentioned above.

Hem Raj Jain is an Indian origin writer and author of Betrayal of Americanism. The views expressed in this article are the author’s own and do not necessarily reflect the editorial policy of Global Village Space.

How will rising extremism in Pakistan affect its ties with the US?

Banned in Pakistan, ‘Padman’ does well in the Middle East