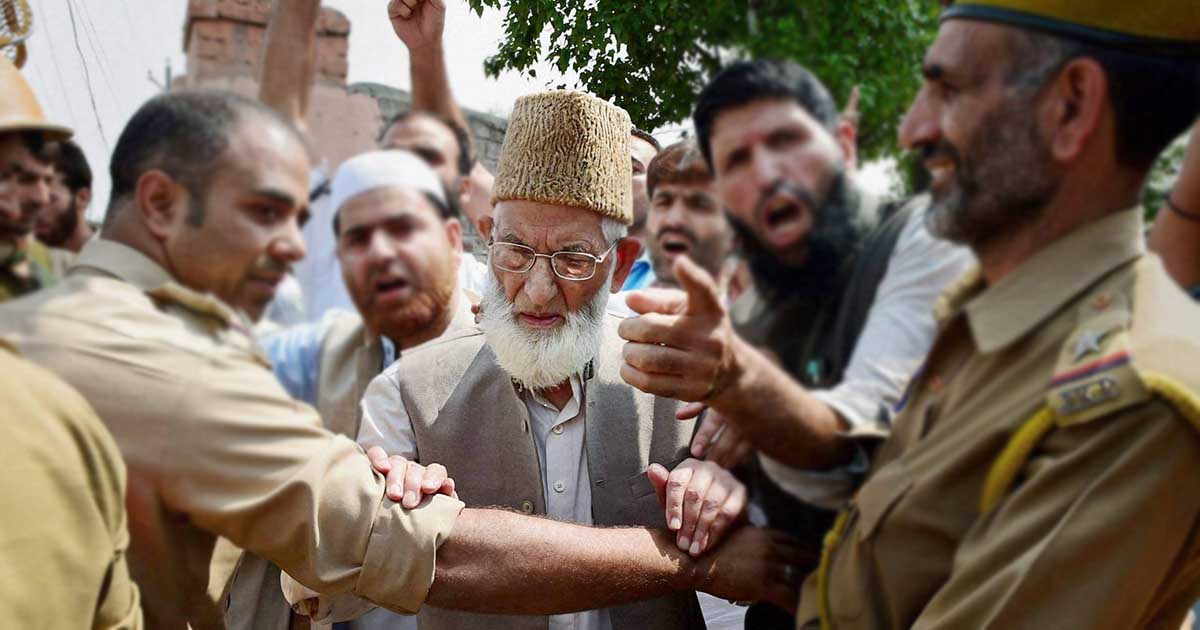 92-year-old Kashmiri resistance leader Syed Ali Geelani has urged the people of Jammu and Kashmir to continue to resist Indian rule “at this critical juncture,” after India unilaterally scrapped the region’s special status early this month.

In a five-point program issued late Saturday — his first since the Indian move — Syed Ali Geelani urged Kashmiris to “organize peaceful protests and demonstrations in their areas of residence.”

Geelani, who heads the All Parties Hurriyat Conference — an amalgam of Kashmir-based pro-freedom parties who work for Kashmiris’ right to self-determination — said: “If the Indian armed forces still attack our gatherings, the entire responsibility for the possible loss of lives and property will be on them, and the world will remain witness to their deeds.”

He called on those working for government officials and the police force to “realize that even when they are hand-in-hand in the oppression of their own people, the Indian State does not trust them.”

China also controls part of the contested region, but it is India and Pakistan who have fought two wars over Kashmir.

“The Jammu and Kashmir police force was disarmed and the entire command was given to the Indian Army and paramilitaries,” Geelani said. “Even if such a humiliation does not awake them to stand up and protest, probably nothing will, and then they should mourn their consciousness and faith, and wait for their destiny of total irrelevance like pro-India politicians in Kashmir.”

He also called on Kashmiris who live outside India to “participate in the resistance struggle by acting as ambassadors of Kashmiri people all over the world.”

“They should use their knowledge of Kashmir’s history and their own lived experiences to highlight the oppression and brutalities of the Indian State. They should also connect with other marginalized and struggling nationalities in other parts of the world and forge solidarities of resistance,” he said.

Geelani, who is under house arrest, appealed to Pakistan and the Muslim ummah community, saying they “must come forward at this crucial juncture to help the besieged people of Kashmir.”

Pakistan is “an important party to the Kashmir dispute and this is the time for unity and action. Today, if you once again get ensconced in so-called pragmatism and fail to act decisively, then neither history will forgive you nor will your coming generations.

“You must continue to heighten your political and diplomatic initiatives to the highest level and respond to the deceit of the Indian occupation with full strength and determination,” he said.

On Aug. 5 the Indian government led by the Bharatiya Janata Party (BJP) revoked the special status of Jammu and Kashmir and locked down the region to contain the situation.

The government-run by Narendra Modi further divided the only Muslim-majority state under Indian control into two centrally-controlled “union territories.”

Kashmiri leaders and residents fear India’s crackdown is an attempt by New Delhi to change the demography of the state, where some groups have been fighting Indian rule for either independence or unification with neighboring Pakistan.

UK cinemas to be torched for ‘Padmavati’ screening

Will the ‘Saudi Help’, help us? – Mir Mohammad Ali Khan