Kashmir: Yaseen Malik arrested to prevent a rally towards Lal-Chowk

Kashmiri leader, Yaseen Malik, was arrested while he was trying to lead a rally from Dastgeer Sahib, Sariabala, Srinagar, after the Zuhr prayers to protest against the continuing atrocities and killings by Indian security apparatus. Earlier police were cracking down at different places to arrest Yaseen Malik and had arrested his nephew, Suhaib from Amira-Kadal bridge and had raided the houses of Yaseen Malik’s family including his sisters.
Since the Uri attack on an Indian military camp, on 18th September, human tragedy and political crisis in Kashmir has been mostly replaced in media by the news of Indo-Pakistani tensions. Government of Narendra Modi was quick to blame Pakistan based militants for attack in Uri, Pakistani government strongly denied that and most Pakistani experts and media suspect that Uri was a false flag operation created by Indian intelligence to divert attention from the political crisis inside Kashmir.

Uri attacks happened just three days before the Pakistani PM, Nawaz Sharif, was set to raise the issue of Indian atrocities and human right violations in Kashmir, Sept 21 2016, at the United Nations General Assembly. Uri attack – in which 18 Indian soldiers died, mostly as result of ammunition depot catching fire – later became the pretext for the Indian PM, Narendra Modi, ordering border raids into Pakistani administered Kashmir (referred to as Azad Kashmir) declared as ‘Surgical Strikes’ by the Indian government. Since then the whole debate has shifted from political and human rights situation in Indian administered Kashmir to the tensions between India and Pakistan and the need to meditate between the two nuclear armed countries. Government of PM Nawaz Sharif has been brought under such intense Indian pressure that while talking to a reporter of Indian Express, at the eve of just concluded Heart of Asia Conference, reportedly Pakistan’s de-facto foreign minister, Sartaj Aziz, clarified that Pakistan will not raise Kashmir at the conference and will only discuss at the bilateral meeting. India however is not ready for any bilateral meeting citing terrorism emanating from Pakistan.
Click on the link to read more details of Indian Express story: Pakistan says ready to talk, won’t raise Kashmir at Afghan forum 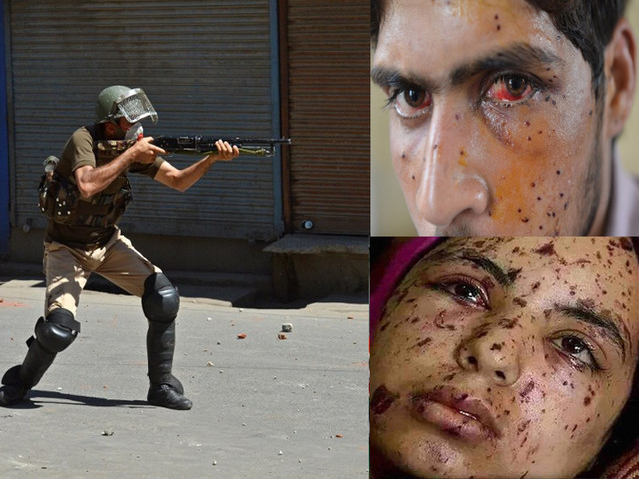 In these circumstances, Kashmir’s political crisis and human right situation that was on the radar of Indian, Pakistani and international media since the killing of Kashmiri freedom fighter, Burhan Wani, on July 9, 2016 has totally disappeared from the media scene. In the past five months, of protests and security crackdown around 150 unarmed Kashmiris, including many women and children, have died, more than 10,000 protestors have injured and almost a thousand young men and men have been shot in eyes by the bird pellets used by the security forces. Thousands of people were arrested including almost all of the pro-independence Kashmiri leadership. Yaseen Malik was only recently released after he became severely ill.
Indian Express reports that these protests coincide with the public holiday to mark the 111th birth anniversary of Kashmiri leader, Sheikh Abdullah, who had signed the 1952 Nehru Abdullah pact with the then Indian PM, Pundit Nehru for the temporary accession of Kashmir – pending plebiscite – with India.
Click on the link to read more: Separatists placed under house arrest, life partially affected 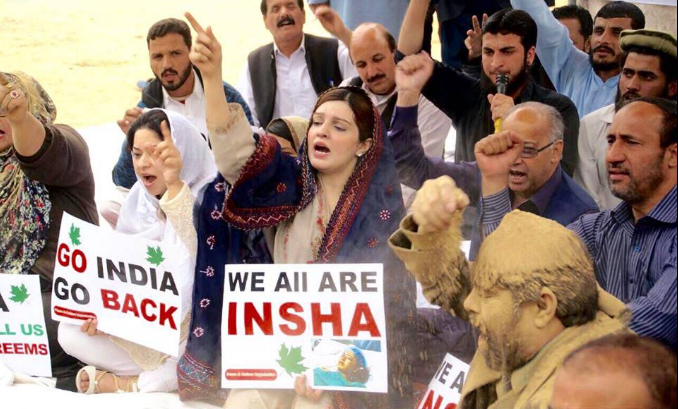 Kashmir’s separate status, unlike any other Indian state, was ensured through Article 370 of the Indian Constitution. However most legal and political experts agree that most guarantees provided under Article 370 have since then been lost. As public protests raged across the Kashmir valley, after the death of Hizb ul Mujahideen leader, Burhan Wani many Indian liberal voices argued for full restoration of Article. 370. Naredra Modi’s BJP party had won elections on the promises of rescinding the Article 370 and turning Kashmir into any other standard Indian state. Kashmiri youth that constitutes the major force behind the ongoing insurgency is not prepared to settle for anything less than full independence from Kashmir. Though the state remains disputed between India and Pakistan, most Kashmiris may not be interested in the option of joining Pakistan. This is something also understood in Pakistan which though insists on UN resolutions, but is willing to consider other out of box options. Such thinking in the past had lead to ‘Musharraf’s Four Point Agenda’.

It is in this historic background and ongoing tensions since the death of Burhan Wani, that Kashmiri leaders, on Monday 5th Dec, had decided to march on Srinagar’s famous landmark, Lal Chowk. However Indian authorities placed Hurriyat leaders, Syed Ali Shah Geelani and Mirwaiz Umar Farooq under house arrest and normal life was paralyzed under crackdown. It is expected that Yaseen Malik will soon be arrested to foil his rally. Ironically Lal Chowk was the place where in November 1947 Pundit Nehru, standing alongside Sheikh Abdullah, had promised Kashmiris a referendum to decide their political future.
Previous article
Pakistan’s Diplomatic Offensive to build pressure on Narendra Modi?
Next article
Why Narendra Modi Govt. was afraid of Sartaj Aziz speaking at Amritsar?