The first shootout in Srinagar city in two years leaves key freedom fighter dead. India resorts to cutting off communication in a glaring display of brutality. 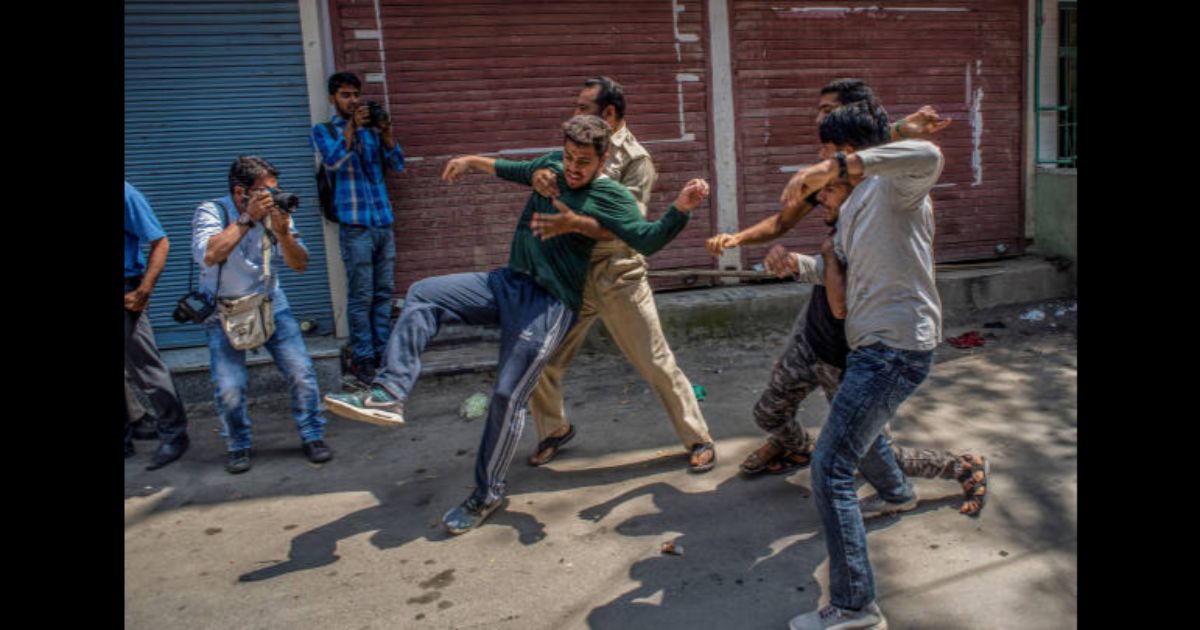 Two Kashmiri mujahideen and a key leader were killed by Indian government forces during a 12-hour gun battle in the disputed region’s capital on Tuesday, authorities said.
Such clashes are a common occurrence in the disputed territory but rare in Srinagar, and the siege marked the first shootout in the city’s centre for two years.

Explosions and gunshots echoed through the densely populated neighbourhood, with streets largely empty as a result of a coronavirus lockdown that has kept most residents to their homes.

Paramilitary troops and police exchanged fire with Kashmiri freedom fighters after cordoning off part of the area.

“Encounter has started at Kanemazar Nawakadal area of Srinagar. JKP and CRPF are on the job. Further details shall follow,” tweeted the Kashmir Zone Police from its official handle.

Five homes were reduced to rubble during the battle and 10 others were severely damaged, residents told AFP.

#UPDATE – The operation was launched on a credible police input last night in Kanemazar, Nawakadal, Srinagar. Some exchange of fire took place during night. One Police SOG personnel injured. Firing resumed during search in the morning and the operation continues: J&K Police https://t.co/u9VjS25Byh— ANI (@ANI) May 19, 2020

Junaid Ahmed Sehrai, a commander of the largest Kashmiri liberation group Hizbul Mujahideen and the son of a top Freedom leader, was killed in the clash, police said in a statement. Junaid, in addition to being a top military commander, was also the son of the Tehreek-e-Hurriyat Chairman Ashraf Sehrai.

Most mobile voice and internet services were cut across the city as the fighting kicked off and have yet to be restored. Locals appeared agitated at the closure of mobile and internet services and poured onto the streets as news of the killings spread to hurl stones at Indian forces, who fired tear gas and shotgun pellets to disperse them. No injuries were reported.

The deaths came two weeks after Hizbul Mujahideen chief Riyaz Naikoo and a close aide were martyred by government forces in the southern Kashmir valley during a two-day gun battle.

The Indian “counterinsurgency” in Kashmir: the toll so far

Counterinsurgency operations in Kashmir have been stepped up during the coronavirus lockdown, while freedom fighters have continued to attack government forces. The freedom fight has been raging on since the independence of India, when Kashmir became the basis of the dispute between India and its neighbour Pakistan. India claims to have killed more than 22,000 freedom fighters, and captured more than 3,000. Its estimated loss has been 5,500 security forces personnel.

Unlike in the past, authorities now bury slain militants far away from their homes in unpopulated frontier areas to stop large funerals from being held. This has been the policy of the Indian government ever since unrest started upon the funeral of slain Kashmiri leader Burhan Wani.

Read more: India continues to be threatened by the legacy of Burhan Wani

Police said that they had targeted 73 Kashmiri freedom fighters this year, many of them during the ongoing Muslim fasting month of Ramadan.

Freedom fighter groups have fought for decades for the region’s independence or its merger with Pakistan and enjoy broad popular support.

The fighting has left tens of thousands dead, mostly civilians, since 1989.
India has more than 500,000 troops stationed in Kashmir.

A heartbreaking picture from the gunfight site today in #Srinagar, Kashmir.

Kashmir in the crosshairs: the dispute between India and Pakistan

The dispute has its origins in the incomplete demarcation of the border between India and Pakistan by the British upon their exit in 1947. As a result, both India and Pakistan lay claim to the region in its entirety. Pakistan substantiates its claim by pointing toward the historically Muslim majority of the region, whereas India claims that the Kashmir region acceded in its entirety to India shortly after independence in 1947. Both states refuse to acknowledge each others’ claims. As such, both states have fought three wars to take control of the disputed region. However, all of these wars have been inconclusive and there has been a political and legal stalemate over the Kashmir issue since 1947.

Mob Lynching in India: FIR against 50 celebrities for writing letter to PM Modi

People in India seek inner peace on internet amid lockdown