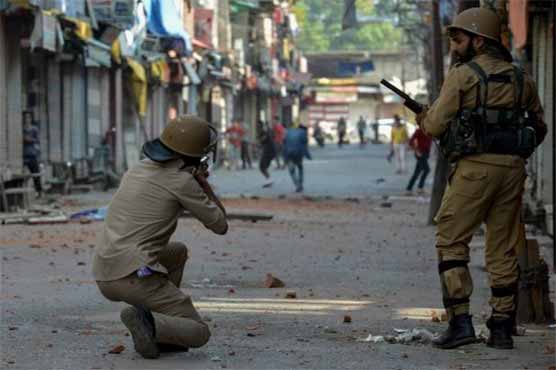 How a murder was committed by the forces today and then brazenly denied !
Is there no sense of humanity left in India? #AdilMurdered https://t.co/dWeFKPZtiK pic.twitter.com/PgwhbBOBOD

A police vehicle ‘deliberately’ crushed a youth to death, after protesters in Srinagar city attempted to march towards the Chattabal area in order to help the rebels trapped in an encounter. The video of the incident, despite the internet blockage by the government, went viral with Netizens terming it as ‘cold-blooded murder’.

An eyewitness told media that, soon after the news of encounter between rebels and government forces came into light, hundreds of people from adjoining areas tried to march to the warzone while chanting pro-freedom slogans “Go India, Go Back” and “We want freedom.”

“At Safa Kadal area of Srinagar, a few miles away from the encounter site, two police vehicles tried to stop the group of youth which resulted in clashes between the youth and the police –  one youth identified as Adil Ahmad Yadoo came under a police vehicle (Police Bunker) and died on spot.”

Jammu and Kashmir Chief Minister, Mehbooba Mufti blamed security personnel for the death of a youth who was killed in a road accident in Srinagar during the clashes that followed the Chattabal encounter, in which 3 LeT terrorists were eliminated.

“The driver of the vehicle could have saved the youth but he deliberately crushed him to death, reflecting the aggressive and anti-people approach of the Jammu and Kashmir Police,” He added.

Meanwhile, the video of the whole incident was captured by the eyewitness which later went viral on social networking sites despite internet blockage by the government. The Hurriyat (M) chairman, Mirwaiz Umar Farooq was among the first netizens who posted the video on his twitter handle and termed it as ‘murder.’

The CRPF was quick to issue a statement saying that the youth was not hit by the CRPF vehicle. On the other hand, the police called the incident a “road accident” and said they were investigating the incident.

Meanwhile, MLA langate, Sheikh Abdul Rasheed commented over the incident, saying “while the goons of Hindu Ekta Manch pelted stones at the police and the Minister’s cavalcade at kootah mode in Kuthua, an innocent unarmed 18-year-old youth, Aadil Ahmad was crushed to death by a vehicle of the J&K police at cement bridge In Srinagar. State police Chief has been held accountable to answer if his forces feel proud or honored in using pallets and bullets on alleged stone pelters in Kashmir – why couldn’t the same police do something when the minister was hackled and attacked today?

Jammu and Kashmir Chief Minister, Mehbooba Mufti blamed security personnel for the death of a youth who was killed in a road accident in Srinagar during the clashes that followed the Chattabal encounter, in which 3 LeT terrorists were eliminated. Condemning the “killing”, Mehbooba asked the J&K police to “punish the guilty”. In a statement, Mehbooba said, “Whose interests are we serving by killing these civilians? This plunges our society into chaos and uncertainty.” She also condemned killing of two civilians at Hajin and Sopore by unknown gunmen during the past 24 hours.