Kashmiris are Not Alone in World: US Politicians Urging India for Transparency

US Presidential Candidate Kamala Harris, and US Democrats Chris Van Hollen and Margaret C Hassan have called the Indian Government to ensure transparency and ease the restrictions imposed on the people of occupied Kashmir. 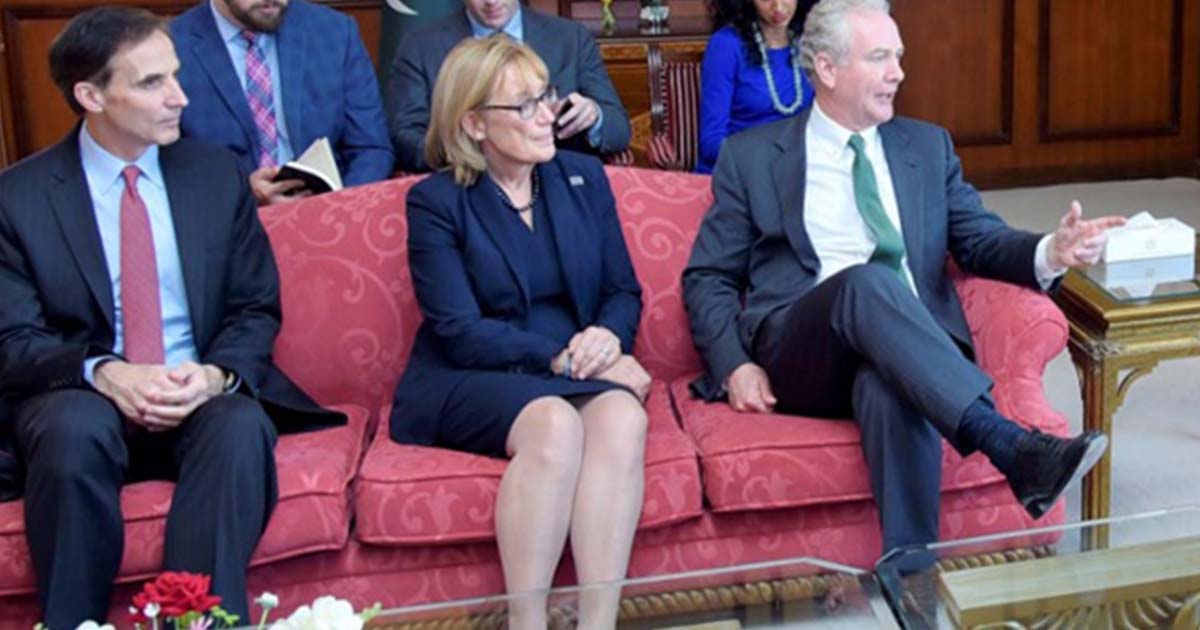 US Presidential Candidates for the 2020 election, and US Congressmen have rallied up in support for the oppressed people of Kashmir, demanding India to ensure transparency and lift the inhumane curfew.

"We have to remind the Kashmiris that they are not alone in the world. We are keeping a track on the situation. There is a need to intervene if the situation demands."#FreeKashmir#KashmirPlebiscitehttps://t.co/TnHAVr0WR1

Harris has joined other Presidential candidates who have spoken for the rights of the Kashmiris, including Bernie Sanders and Elizabeth Warren. US Senators have also come forward to express their concern over the escalating human rights violations in Indian-occupied Kashmir.

On Monday, US Democrats Margaret C Hassan and Christopher J Van Hollen urged New Delhi to ensure transparency on the ongoing situation in the disputed Himalayan valley of Kashmir. The Democrats also praised Pakistan for allowing them unconstrained access, alongside the UN military observers, to Azad Jammu and Kashmir.

On Sunday, the US Democrats Christopher J Van Hollen and Margaret Hassan visited Muzaffarabad and engaged with the leadership of Azad Kashmir, alongside observing the on-ground situation first-hand. They met with the President of Azad Jammu and Kashmir, Sardar Masood Khan, who underscored the need for the US to intervene in the escalating humanitarian crisis in occupied Kashmir.

The US Senators also met with the Prime Minister of Azad Jammu and Kashmir, Raja Farooq Haider.

Raja Farooq Haider stressed that the solution for the longstanding dispute of Kashmir lies in the UNSC resolutions, and Washington must ensure the implementation of these resolutions.

4/4-Prime Minister said that Eight million people have been detained in occupied Kashmir by Indian forces.He said UN resolution provides roadmap for resolution of the issue, US should do role to implement it.@farooq_pm @UN @wasimpfp pic.twitter.com/FXESAMKuM1

The visit took place after Senator Van Hollen flew in from New Delhi after being denied permission by the Narendra Modi-led Indian government to visit occupied Kashmir. In Pakistan, the US Senators enjoyed unconstrained access to visit Azad Jammu and Kashmir, alongside engaging with the Azad Kashmiri leadership.

Pakistan PM Imran Khan in his meeting with the US Senators Christopher Van Hollen & Margaret C. Hassan, who called on him in Islamabad on Monday, "underlined the importance of earliest resumption of the US-Taliban peace talks", says a Pakistan govt press release. pic.twitter.com/904fvYT5Io

US Senators Chris Van Hollen and Margaret C Hassan expressed their concerns over the escalating human rights violations in Indian occupied Kashmir. US Democrat Chris Van Hollen expressed his displeasure over not being granted the permission to travel across occupied Kashmir and revealed that he was asked to explain his reasons to visit the disputed Himalayan territory.

Speaking to the local media, Senator Van Hollen said, “I think it’s really important that we get the facts. I’d hoped to visit Jammu and Kashmir (Indian Occupied Kashmir) in order to gather more facts and find out what was going on.”

The US Democrat stressed that a continue conflict between the two South Asian rivals does not serve anybody’s interests.

He added, “I have deep concern about the human rights situation in [occupied] Kashmir and while we would all like to find a way to address the underline issues in Kashmir, the immediate concern is the question of restoring full communications, the release of political prisoners, detainees and indeed the curfew.”

Both the US Senators were impressed by the transparency and unconstrained access provided by Pakistan, allowing them to visit Azad Jammu and Kashmir and openly engage with the local leaders and public.

Senator Hollen revealed that the United Nations Military Observers Group enjoyed complete freedom to “investigate any incident whenever it occurs” in Azad Jammu and Kashmir. He observed, “Whereas reportedly on the Indian side, UN observers are potentially confined to Srinagar, their offices in the area do not have the freedom to investigate.”

The US-India partnership has always been rooted in our shared democratic values. I'm concerned about recent events in Kashmir, including a continued communications blackout and other restrictions. The rights of the people of Kashmir must be respected.https://t.co/K7JDmAjQg7

Senator Hassan urged New Delhi to provide “more transparency and access for the UN observers”. She said that she is scheduled to visit New Delhi and would urge the Indian government to submit a response on the issue of limited access provided to the UN military observers.

Senator Hassan, who is scheduled to visit New Delhi next, said she would seek the Indian government’s response on the issue of limited access being given to the UN observers.

Senator Van Hollen observed that the UN Security Council has opened up the longstanding issue of Kashmir after New Delhi’s unilateral decision of abolishing its partially-autonomous status. He said that the United States had supported the proposal moved by China.

Read more: US Senators Urge Trump to Intervene in Kashmir to end the Humanitarian Crisis

Van Hollen said, “I think it’s important that the government of India recognize that the UN Security Council remains an option for the international community to seek actions on human rights issues.” However, he observed that Pakistan and India must resolve the dispute by engaging in dialogue, and Washington “should always be ready to facilitate discussions.”

Senator Margaret Hassan agreed that the United Nations has a role to play in resolving the conflict, but she added that the immediate concern for Washington is to ensure that the curfew is lifted, and political prisoners are released.

She said, “We will continue to pressure the Indian government in the ways we can.” Senator Hassan noted that the leadership of Azad Jammu and Kashmir has informed them of their efforts to promote restraint.

What a speech can do!#ImranKhan 's speech in #UNGA has catalyzed the pressure on India sans #Kashmir. After #BernieSanders & #ElizabethWarren, #KamalaHarris is the third US presidential candidate raising her voice for Kashmir.She has gone as far as suggesting an intervention pic.twitter.com/gjMrAt4FLN

She said, “But there is always a risk that one side or the other misinterpret something, so I think it is extremely important to find ways forward so that Pakistan and India can try to address these issues, talk with each other and find a way forward for a better relationship.”

Senator Van Hollen underscored the “risk of escalation” and said that Prime Minister Imran Khan understands this risk and has been “doing his best to deescalate the situation.” The US Democrat stressed that a continue conflict between the two South Asian rivals does not serve anybody’s interests.

Senator Margaret Hassan stressed the need for communication between New Delhi and Islamabad and added that the US will urge the Modi-led government to ease restrictions on Kashmiris before initiating bilateral dialogue on the issue. She said, “I certainly think if there could be efforts as we have called on the Indian government to do towards alleviating some of the situation in [occupied] Jammu and Kashmir that might provide an opening to have further discussions.”

Rahul Gandhi proves a serious contender with A+ manifesto