If needed, the company will replace the faulty HECU fuse kits that are potential fire hazards. Both the inspection and the component replacement will be done free of cost. However, not all people are eligible for the free replacement!!

A month hasn’t passed since the day when Hyundai Nishat summoned their Tucson buyers to the showroom to check for a manufacturing fault they thought could lead to the car catching fire, and according to the recent news KIA has followed suit in recalling all the vehicles in Pakistan.

Nationally, there have been a few incidents of vehicles catching fire in Pakistan, and videos of vehicles engulfed in flames have gone viral on social media a few times. One of those vehicles is by the Korean auto manufacturer KIA.

Kia has officially requested its customers to take their vehicles to the nearest company-sponsored dealerships to be inspected.

If needed, the company will replace the faulty HECU fuse kits that are potential fire hazards. Both the inspection and the component replacement will be done free of cost.

The notification said, “as part of KIA’s global campaign, Lucky Motors Corporation Limited is carrying out a Special Safety Service Campaign related to the inspection, and if required, replacement of HECU fuse kit in KIA Sportage vehicles. A potential electrical issue of this component may result in safety hazards, referring to the fire. Accordingly, in pursuance of our promise of ensuring policy, we request our eligible customers to get their KIA Sportage inspected by visiting any of our 33 Kia authorized dealerships spread across 19 cities nationwide, to avail this free service.”

Read More: Corolla and Civic are possibly getting a new competitor in Pakistan! 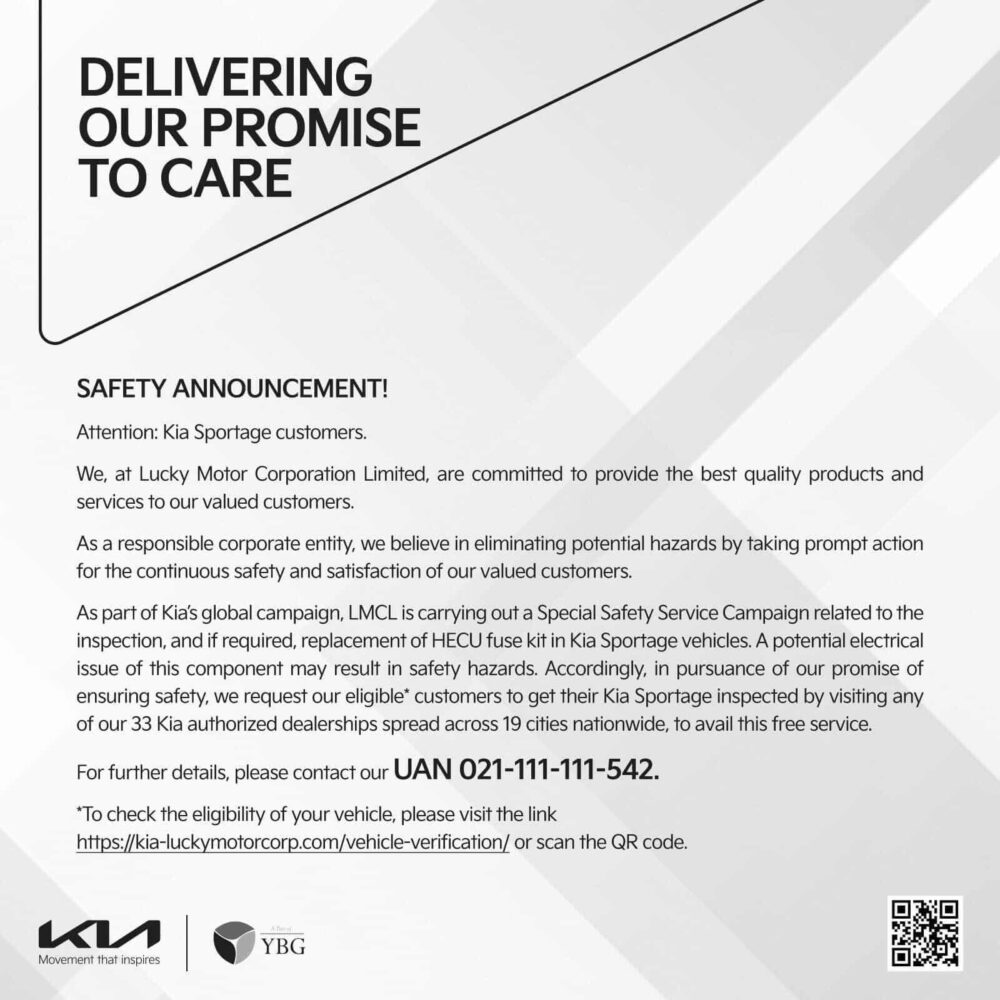 The words, “eligible customers” probably mean that the people who have made modifications to the engine might be excluded from the service.

Almost a month ago, Hyundai sent a similar message saying that their Tucson may “have a possible malfunction in the ABS module, which could potentially short-circuit. As a precautionary measure, please take your vehicle to a Hyundai dealership immediately, for the installation of an enhanced protective kit and upgrade of the Electronic Control Unit & AVN software of your vehicle (free of any cost) to provide a safe and reliable driving experience.”
However, Pakistan is not alone to have experienced this.

The issue is global. According to Tucson.com news from 4th May, Hyundai is recalling more than 390,000 vehicles in the U.S. and Canada for two problems that can cause engine fires. In one recall, owners are being told to park their vehicles outdoors until repairs are made.

The article says that engine failure and fire problems at Hyundai and affiliated Korean automaker Kia have plagued the companies for more than five years, affecting the owners of more than 8 million vehicles.

The company says corrosion can cause a short circuit in defective antilock brake circuit boards that can cause a fire even if engines are off.

According to 7news, Product Safety Australia is claiming that defective cars can burst into flames even if the vehicle is switched off.

A defect means that the system controlling the Anti-lock Braking System, Electronic Stability Control System, and Traction Control System can experience an electrical short-circuit if water enters it, causing the car to catch fire even if parked.