The US President, Donald Trump defended killing Iranian general Qasem Soleimani criticizing his opponents for going against him. This move of Trump has pushed the region into chaos and compelled Iran to strike back yet Trump is adamant on calling it a "right move". 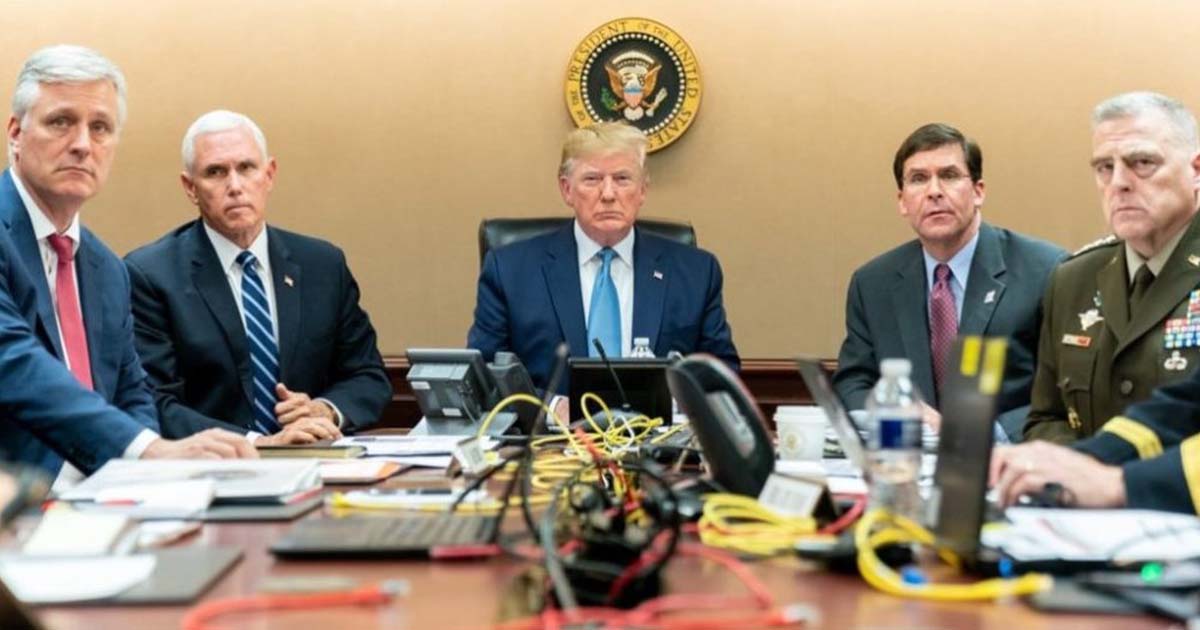 US President Donald Trump has lashed out against the “fake news media” and their “Democrat partners” over criticism of his administration’s decision to assassinate Iranian general Qasem Soleimani.

The president claimed in tweets “marred with misspellings” that it does not matter if Soleimani presented an imminent threat to the US, something he had said previously to defend the assassination, because of the general’s “horrible past.”

The Fake News Media and their Democrat Partners are working hard to determine whether or not the future attack by terrorist Soleimani was “imminent” or not, & was my team in agreement. The answer to both is a strong YES., but it doesn’t really matter because of his horrible past!— Donald J. Trump (@realDonaldTrump) January 13, 2020

Trump also accused the media of trying to portray “terrorist Soleimani” as a “wonderful guy.”

Though the president has claimed the January 3 assassination of Soleimani was due to the general planning attacks against US forces and embassies, his own defense secretary admitted on Sunday that he “didn’t see” any specific evidence to suggest those attacks were imminent.

Secretary of State Mike Pompeo also struggled in a recent press conference to define the “imminent” threat Soleimani presented to the US. He claimed the US “got it right” with their decision to kill the general.

A reporter just asked Pompeo if he can provide specific evidence of the imminent threat that led to Soleimani’s assassination.

And he has absolutely nothing.

These men want to lie us into war, again.

Huge crowds of Iranians took to the streets in the aftermath of the general’s death to protest the killing, and his funeral drew an enormous procession.

Tehran targeted military sites in Iraq housing US forces in retaliation for the assassination. No American casualties were reported in what was believed to be a show of force by the Iranian authorities.

General Qasem Soleimani was heading Al Quds force which is comprised of men 10,000 to 20,000 and it’s an unconventional branch of Islamic Revolutionary Guards Corps (IRGC). This organization is banned by the US already. Al Quds primarily perform extraterritorial Ops outside Iran by clandestine operations.

Soleimani joined IRGC in 1979 with bare minimum training and rose very quickly because of his ability to mobilize and train nonmilitary person. He fought the Iran-Iraq war and earned his name as a brave fighter. After this, he was deployed on the Afghan front and worked on drug trafficking. He was approached by Americans to help against the Taliban after 9/11 but that deal didn’t materialize for some reason.

He became head of Al Quds in 1998 as Major General and he had earned the name of strategist and was considered very close to Khamenei.

Iran will remember Gen Qasem Solemani for a long time to come and what he has achieved for Iran on the military front will keep benefiting them.

Dr. Zeeshan Khan - 9 April 2021
After the arrival of third wave of Coronavirus in Pakistan, things have worsened to a larger extent. Even though the vaccines for COVID-19 have...

Imran Khan, Malala among World’s Most Admired people of 2019