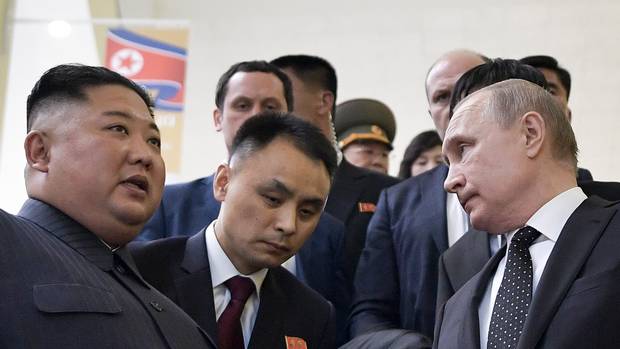 North Korean dictator Kim Jong Un, in his first visit as head of the state since taking power in 2011, arrived Beijing in an armored military train on Monday. Meeting was held on the request of Chinese President Xi Jinping amidst the development of Trump-Kim meeting, anticipated in May this year. There had been speculations about a high level Korean government figure visiting China since last week. However, the confirmation came, after the visit was finally over, by the North Korean Central News Agency (KNCA) which termed it as an “unofficial” visit instead.

The pictures released by the Chinese News Agency depicted a meeting over a conference table with Xi Jinping presiding Chinese delegate and Kim Jong Un leading Korean side. US maintained that they had already been informed about Kim travelling to China. Kim once again reiterated his willingness to denuclearize Korean peninsula, but with certain, undisclosed yet, conditions.

In exchange, it may use its influence to make North Korea back down on few of its, most certainly difficult, demands. Peace and stability is what everybody wants. The only impact this meeting has on the process is that the price, to achieve the goal, may have considerably been raised.

Both North Korea and China have historically enjoyed cordial relations, starting from Korean War where Chinese fought alongside North Korean soldiers. Despite the crunching economic sanctions by the rest of the world, China has been reluctant to abide; being trade partner for 90% of North’s total net exports. But in recent years things have fairly been contentious. Especially in the Xi’s tenure, North has significantly drifted away from the historic domination of China.

It is generally misunderstood by the world in general and west in particular that China is igniting the conflict between both North and South Korea.  Fact of the matter, nevertheless, remains other way around. China has always distanced itself from the extreme measures which North Korea has gone with, over the course of history. In fact, same is the reason behind deteriorating relations between two recently.

Destabilization in Korean peninsula is against the regional interests of China. Because Kim was persistent with his nuclear and Inter-continental Ballistic Missile (ICBM) tests, China decided to comply with the enacted trade restrictions more sternly. On January 5, 2018 China announced to limit its oil and refined products exports to North Korea in a move to stop Kim from his known hostility. Growing Russian influence in the region may have been seen as a viable alternative by Pyongyang, but Russia’s own economy is not stable enough to lend a shoulder to DPRK.

The objectives pursued by Chinese strategists, to make North Korea realize how important China is for its survival, seem to have been achieved with this visit. Apart from North Korea, it was crucial for China’s own interests that working relations are brought to better terms before Trump meets Kim. Most certainly China deems the stability of peninsula important for global security, but it has to be done keeping its own interests in balance. Whatever the outcome of Trump-Kim meeting may come up, China’s approval is necessary in any case.

US maintained that they had already been informed about Kim travelling to China. Kim once again reiterated his willingness to denuclearize Korean peninsula, but with certain, undisclosed yet, conditions.

Over the years, despite heavy economic sanctions and international pressure, Kim Jong Un has kept going with the nuclear program. There is a complete history to what has made North Korea achieve the feat which only few have managed to. If Kim is ready to give up all that he has accomplished from the toil of decades, then something substantial will be asked in return without any doubt. Though the conditions for denuclearization have not yet been made public by Kim Jong Un, they must have been the part of discussion with his Chinese counterpart for sure.

For USA, the said meeting may pose new challenges. The truth is, of course, that the turnaround in North’s stance has been partly due to China’s attitude shift. But an early 2000s like alliance between China and North Korea would suggest that military strike against the latter, in case the negotiations fail, will not be a viable option anymore. As the bilateral ties are normalizing between two important Asian countries, China’s stake in the Korean peace process has also significantly increased.

Read more: Could Xi Jinping’s presidency for life lead to the decline of…

Nuclear fallout is what everyone fears. With North Korea willing to surrender its nuclear devices, the ball has been pushed to the United States’ court. It is imperative that China will seize the opportunity to secure its strategic and economic interests. For instance, China will utilize the opportunity as leverage against tariffs which President Trump is ready to enact over imports in USA. In exchange, it may use its influence to make North Korea back down on few of its, most certainly difficult, demands.

Peace and stability is what everybody wants. The only impact this meeting has on the process is that the price, to achieve the goal, may have considerably been raised.

Andrew Korybko - 24 July 2021
According to Raffaello Pantucci, Pakistan is losing its regional security significance as it cannot maintain a balance between the great powers. However, Andrew Korybko negates Mr. Pantucci's claims and states that Pakistan is actively balancing between China, Russia, and the US and has a strong multi-alignment policy.

Kim prepared to cede Nuclear Weapons if U.S. pledges not to invade