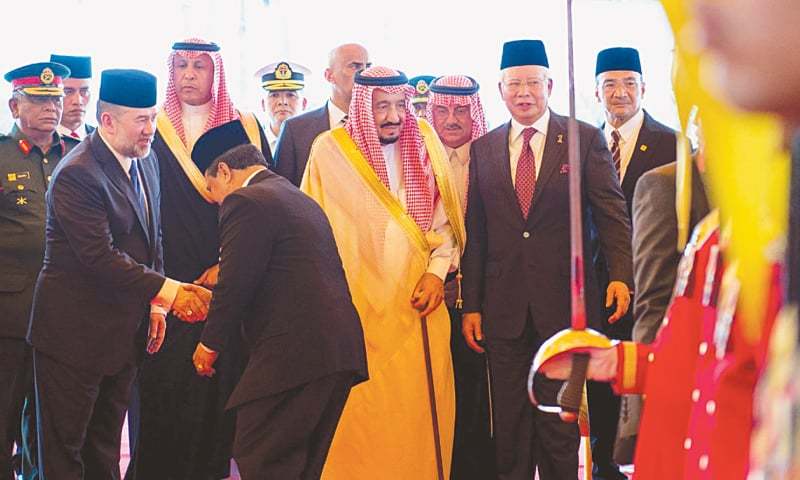 Yet Salman’s geopolitical concerns go far beyond whether the US remains a reliable guarantor of regional security. Saudi Arabia is locked into a global battle with Iran for dominance in the Muslim world. For the Al Sauds, the kingdom’s ruling family, the struggle with the Islamic republic is existential in nature.

The spectacle of Saudi King Salman’s tour of Asia is matched by its significance. Attention has focused as much on his 1,500-strong entourage and their 459 tons of luggage – roughly the weight of two Boeing 787 Dreamliners – as it has on expectations of billions of dollars in investment. To be sure, economics is high on the Saudi leader’s agenda. Salman is looking at both strategic investments in Asia as well as Asian investments in the kingdom that will help it diversify its economy and strengthen ties to China and major Muslim nations in an era of uncertainty about the United States’ place in the world.

Yet Salman’s geopolitical concerns go far beyond whether the US remains a reliable guarantor of regional security. Saudi Arabia is locked into a global battle with Iran for dominance in the Muslim world. For the Al Sauds, the kingdom’s ruling family, the struggle with the Islamic republic is existential in nature.Iran not only represents an alternative form of Islamic rule that recognises a degree of sovereign legitimacy and was established by a popular revolt.

It also has assets the kingdom lacks that are key to sustaining regional hegemony: a large population, a huge domestic market, an industrial base, a battle-hardened military, geography, and a deep-seated identity grounded in a history of empire.

The epic battle between Saudi Arabia and Iran is being fought not only on the international and Middle Eastern stage but domestically in Muslim and non-Muslim nations that span the globe.

Many fear the alliance is also intended as a military bloc against Iran that would also bolster Saudi Arabia’s campaign in Yemen – where it is fighting Houthi militia and loyalists of the former president, Ali Abdullah Salleh, allegedly supported by Iran.

China may not have a seriously sizeable Muslim community, yet the lure of ultra-conservatism has made its mark among Hui Muslims and Uygurs alike.

Chinese concern about the impact of ultra-conservatism coupled with Iran’s strategic advantage has shaped Chinese policy even if Saudi Arabia is a major oil supplier and commercial partner as well as a military ally.

China remains reluctant to clearly articulate its strategic interests or intentions in the Middle East and North Africa beyond its drive to secure resources, investments and people, and expand its influence through economic ties and its “One Belt, One Road” initiative

President Xi Jinping’s (習近平) visit to the Middle East last year, the first by a Chinese leader in seven years, saw the signing of billions of dollars’ worth of agreements with Saudi Arabia and a ten-fold expansion of trade with Iran over the next 10 years. The significance may go far beyond commerce as Chinese interests align more with Iranian interests than those of Saudi Arabia. From Riyadh, Xi went to Iran to become the first foreign leader to do so following the lifting of international sanctions against the Islamic republic. Saudi leaders could not have been pleased.

Xi’s determination to gain a first mover advantage in Iran at a time that Saudi Arabia was seeking to increase rather than reduce the Islamic republic’s international isolation suggested that more than commerce was at play.

Xi’s visit to the kingdom was accompanied by talk of brotherly relations and strategic cooperation. The rhetoric, however, did little to mask serious differences on issues ranging from Syria – with Chinese support for President Bashar al-Assad – to Saudi propagation of ultra-conservatism and a relative decline in Chinese reliance on Saudi oil.

“Our biggest worry in the Middle East isn’t oil – it’s Saudi Arabia,” a Chinese analyst told the Asia Times. Religious affinity is not something China has to worry about with Shiite-majority Iran, which has long projected itself as a revolutionary rather than a sectarian power.

Consequently, China remains reluctant to clearly articulate its strategic interests or intentions in the Middle East and North Africa beyond its drive to secure resources, investments and people, and expand its influence through economic ties and its “One Belt, One Road” initiative to link economies into a China-centred trading network.

As a result, China’s strategic dialogue remains focused on free-trade agreements with the six-nation, Saudi-led Gulf Cooperation Council (GCC) rather than the forging of broader strategic partnerships that go beyond economics.

China has also long sought to tread carefully in its for now limited military contacts. China was, for example, slow to engage in its security cooperation with Saudi Arabia that started in secret in 1985, five years prior to the establishment of diplomatic relations between the two countries.

In a deal that was only disclosed three years later, Saudi Arabia in its first weapons deal with China bought in 1985 for US$3.5 billion 36 Chinese CSS-2 East Wind intermediate range ballistic missiles even though they were known to be highly inaccurate in conventional use.

The deal said much about the attitude of Saudi Arabia towards China. Saudi Arabia saw the deal as a way to counter Iran’s missile strength that in a twist of irony was built on Chinese technology and design, and as leverage to persuade the US to be more forthcoming with weaponry that had offensive capabilities.

In a further indication that China was making only limited inroads and that Saudi Arabian arms purchases remained focused on Western suppliers, Saudi Arabia – even while engaged in a massive weapons buying spree – waited 30 years to acquire a more up-to-date Chinese missile system, the DF-21 East Wind ballistic missile.

Ultra-conservatism – which complicates communal relations, changes policies towards minorities, and alters local culture as well as Saudi efforts to forge an anti-Iranian military alliance – loomed even larger in Malaysia and during the current Indonesian leg of Salman’s tour.

Salman is looking at both strategic investments in Asia as well as Asian investments in the kingdom that will help it diversify its economy and strengthen ties to China and major Muslim nations in an era of uncertainty about the United States’ place in the world.

The state of Johor’s straight-talking sultan, Ibrahim Ismail Ibni Sultan Iskander, didn’t mince words last year when he decried what he described as creeping Arabisation of the Malay language. He insisted that Malaysians use Malay rather than Arabic words when referring to religious practices and Muslim holidays.

In a frontal assault on Saudi-inspired ultra-conservatism, Ibrahim advised his people that “If there are some of you who wish to be an Arab and practise Arab culture, and do not wish to follow our Malay customs and traditions, that is up to you.

I also welcome you to live in Saudi Arabia. That is your right but I believe there are Malays who are proud of the Malay culture. At least I am real and not a hypocrite and the people of Johor know who their ruler is,” the sultan said.

Both Malaysia and Indonesia have been reluctant to become too involved in a 41-nation, Saudi-led military alliance headquartered in Riyadh that officially was created to combat political violence and the Islamic State (IS).

Many fear the alliance is also intended as a military bloc against Iran that would also bolster Saudi Arabia’s campaign in Yemen – where it is fighting Houthi militia and loyalists of the former president, Ali Abdullah Salleh, allegedly supported by Iran.

Saudi influence was nonetheless evident when Malaysian Defence Minister Datuk Seri Hishammuddin Hussein last year, to the consternation of his ministry’s civilians, agreed to let 300 Malaysian paratroopers participate in a 20-nation military exercise in the kingdom.

Malaysia currently has up to 100 military personnel and C-130 Hercules transport planes in Saudi Arabia that provide the alliance with logistical support.

The Indonesian military, like its Malaysian counterpart, regularly trains with Saudi officers to counter IS. Nawaf Obaid, a Saudi policy analyst with close government ties, described last year’s exercise as a preparation for possible Saudi military intervention in Iraq and Syria.

Critics in the ministry were taken aback when Hishammuddin obliged them weeks later to endorse Saudi funding for the King Salman Centre for Moderation (KSCM). Under the auspices of the ministry’s think tank, the Malaysian Institute of Defence and Security (MIDAS), would seek to counter jihadist messaging in Southeast Asia.

An internal ministry memo said MIDAS had a “strategic interest to be collaborating with various institutions internationally particularly from Saudi Arabia”.

A joint communique at the end of Salman’s visit described political violence as the most important issue discussed between the king and Prime Minister Najib Razak.

Najib backed Saudi concerns about Iranian interference in the internal affairs of Arab countries and called on the Islamic republic to respect the sovereignty of regional states.

The two leaders also announced the establishment of the King Salman Centre for International Peace (KSCIP), a collaboration of Saudi and Malaysian defence institutions as well as the Muslim World League, a prime Saudi vehicle for the propagation of ultra-conservatism.

It’ not clear if KSCM and KSCIP are separate institutions.In Indonesia, a country that prides itself on its tolerant interpretation of Islam, Saudi-style ultra-conservatism is similarly making itself felt.

Major Islamic organisations with a history of opposition to Wahhabism, the ultra-conservative world view that governs the kingdom, see Shiites, who constitute 1.2 per cent of the population, and Iran as threats to national security.

A former deputy head of Indonesian intelligence goes as far as describing Shiites as the foremost domestic threat to national security.

Saudi media reported that King Salman hoped during his visit to lay the ground for the opening of more Arabic-language Islamic schools in Indonesia.

They said the king would also be increasing the number of scholarships available to Indonesians for study in Saudi Arabia. Many of those who return after completing their studies are imbued with Saudi-style ultra-conservatism.

All in all, Salman’s Asian official visit-cum-holiday is likely to reverberate far beyond the billions of dollars in economic and commercial agreements he signs. The visit also solidified cooperation between Asian nations and Saudi Arabia in the fight against IS.

This, despite the fact that IS and the kingdom have the same ideological roots, even if the jihadists accuse Saudi Arabia of having deviated from the true path of Islam.

At the same time, the tour could also well embed sectarian aspects of Saudi’s Arabia’s epic struggle with Iran ever deeper in the social and political life of the continent’s Muslims.

Dr. James M. Dorsey is a senior fellow at the S. Rajaratnam School of International Studies, co-director of the University of Würzburg’s Institute for Fan Culture, and the author of The Turbulent World of Middle East Soccer blog. The views expressed in this article are the author’s own and do not necessarily reflect Global Village Space’s editorial policy. This piece was first published in SCMP. It has been reprinted with permission.

Previous articleImran Khan – KPK & Sindh to get a “surprise”
Next articleKabul and Islamabad: Danger on the Durand line – Michael Kugelman

News Desk - 2 August 2021
India aims to move its agenda in UNSC as it assumes its presidency, while Pakistan Foreign Office has come with a responsible statement.

31 July 2021
Previous articleImran Khan – KPK & Sindh to get a “surprise”
Next articleKabul and Islamabad: Danger on the Durand line – Michael Kugelman