Koreans Want Peace & Unity: Will the U.S. & China Allow it? 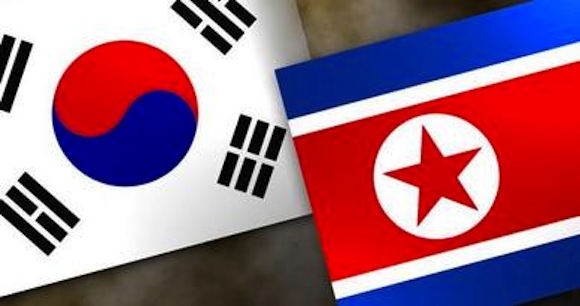 My biggest concern is not the embarrassment of a US public afraid of the tiny impoverished nation of North Korea. If that embarrassed me, how would I survive what the US culture makes of ISIS, or – for that matter – the election of Donald Trump? My biggest concern is that the US war profiteers may end up using Korea to get us all killed.

The United States bombed the living hell out of North Korea, and – in hopes that nothing would survive – dropped diseased insects on the place, hoping to start plagues. One bit of later collateral damage was the release of Lyme disease in Lyme, but Hollywood came out of it with the concepts of brainwashing and Manchurian candidates, so some might call it a fair trade.

The United States has thus far refused to ever end the war, sign a peace, or allow reconciliation. Southern and Northern efforts toward peace have been thwarted. Northern proposals (echoed by China) to halt nuclear testing if the US will halt the “exercises” in which it practices for the nuclear bombing of the North have been mocked and scorned.

North Korea has committed to no first use, as has China. The US has proposed first use and made plans for it, while heavily militarizing South Korea, building a new base on Jeju Island, sending armed drones to the border, and installing THAAD.

Terminal High Altitude Area Defense, formerly Theater High Altitude Area Defense (THAAD), is part of what the United States calls “missile defense” and much of the world thinks of as missile offense. The US calls it a (highly profitable) tool to protect South Korea from the attack that the North is not threatening. China sees it as a part of the US efforts to encircle China and to be prepared to strike first and to minimize the Chinese response.

Read more: US Secretary of State warns North Korea that military action is an ‘option’

Giving not a rat’s rear to what China or North Korea or even South Korea has to say, distracted by its efforts to stir up World War III with Russia, and obsessed with prolonging its numerous wars in the Middle East and Africa, the United States simply pushes ahead.

On Wednesday, April 5, a group of South Koreans plans to demonstrate against the current course in front of the White House in Washington, D.C. One of them, Rea-Kyung Lee, Chairman of the board of the Tomorrow Association, provided me with a statement that I paraphrase thus:

“The Korean people will be closely watching how the US President Trump and the Chinese National Chairman Xi Jin Ping deal with the deployment of THAAD onto the Korean Peninsula when they meet in the United States on April 6 and 7.”

“The United States is unilaterally imposing THAAD deployment without any normal and proper agreement with South Korea. The former Korean president who initiated the process has recently been impeached for corruption. A new election is planned for early May. Meanwhile, China is imposing sanctions on South Korea in retaliation.

The residents of the Korean peninsula have been being forced to undergo the tragic status of national division, while constantly experiencing daily life under the threat of war for more than 70 years.

The democratic citizens of South Korea have ousted a corrupt president using peaceful, non-violent candlelight demonstrations. The hurdles still faced are long-standing. Following the period of Japanese imperialism, the Korean people desired to establish an independent and unified nation but were frustrated by the US-Soviet military occupations of the peninsula and the war between the United States and China.

The residents of the Korean peninsula have been forced to undergo the tragic status of national division, while constantly experiencing daily life under the threat of war for more than 70 years. The US and China, in fighting for supremacy over the Korean peninsula, should not repeat such historical crimes.

David Swanson is an author, activist, journalist, and radio host. He is director of WorldBeyondWar.org and campaign coordinator for RootsAction.org. Swanson’s books include War Is A Lie and When the World Outlawed War. This article was first published at DavidSwanson.org and is republished here with the permission of the author. The views expressed in this article are the author’s own and do not necessarily reflect Global Village Space’s editorial policy.