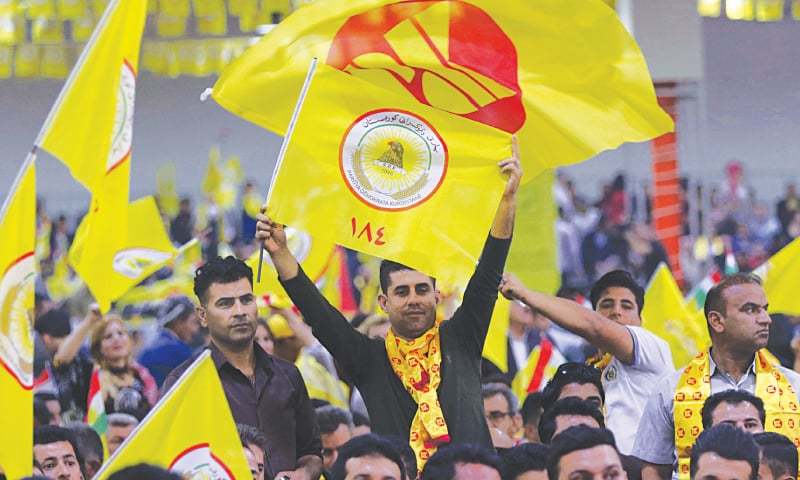 Iraq’s divided Kurds are bracing for a blow on the political front in the country’s May 12 elections.According to estimates, the Kurds’ loss of seats in Iraq’s parliament could reach double figures as their shrunken geographic footprint is compounded by a bitter feud between the two main political parties in semi-autonomous Kurdistan.

The autonomous Kurdish region held independence referendum last year in September in which more than 90 percent Kurds voted for independence. However, things didn’t go as planned for Kurds and they lost Kirkuk in addition to other areas in a blistering Iraqi offensive which not only exposed the weakness of the autonomous Kurdish region in Iraq but also uncovered the divisions within Kurds.

In yet another setback for Kurdish parties, this will be the first time Kurds appear on candidate lists fielded by other ethnic blocs in their home region.

During the Iraqi offensive on Kirkuk, the Kurdish Democratic Party (KDP) and the rival Patriotic Union of Kurdistan (PUK) had fallout and PUK forces withdrew from the oil-rich city providing opportunity to Iraqi forces to capture the city without much resistance. This resulted in enmity between two Kurdish parties which has only exacerbated in recent months.

Read more: 92 % Kurds vote for independence in referendum: How will the…

These differences are expected to result in the loss of seats for Kurds in Iraqi Parliament. In Iraq’s last election in 2014, Kurdish parties won 62 out of parliament’s 329 seats, which included Kirkuk, Nineveh, Diyala and Baghdad.

In contrast to the 2014 elections, there will be no participation in the Kurdish territories outside the autonomous region, in the absence of Kurdish security forces to protect our voters.In yet another setback for Kurdish parties, this will be the first time Kurds appear on candidate lists fielded by other ethnic blocs in their home region.

News Desk - 24 April 2021
The World Bank’s Board of Executive Directors approved $400 million in financing from the International Development Association (IDA) to support Pakistan in accelerating investments in education and health services in the Khyber Pakhtunkhwa (KP) province.

Exploring the unholy nexus between RSS and Modi’s BJP

China: Xinjiang exports to US doubled in first quarter despite sanctions

Covid-19 vaccine – a commodity for the rich of the world

Coronavirus can be treated with cow dung and urine: Indian leader