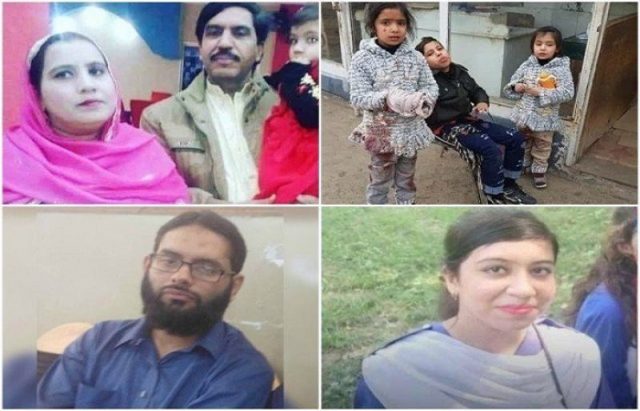 The Lahore High Court (LHC) directed a session’s judge on Thursday, 14th February, to appoint a magistrate to carry out the task, ordering a judicial inquiry into the Sahiwal killings– that claimed four lives as officials of Counter Terrorism Department allegedly opened fire at their vehicle.

The bench, headed by the high court Chief Justice Sardar Mohammad Shamim Ahmed, resumed the hearing of a petition seeking the formation of a judicial to probe into the Sahiwal incident. During the hearing today, the Joint Investigation Team (JIT) told the bench that it had recorded the statements of the witnesses.

Umair Khalil, the son of Sahiwal encounter victim Khalil had last week recorded his statement before the Joint Investigation Team (JIT) probing the shootout which resulted in the killing of his mother, father, sister, and uncle.

When the Chief Justice LHC asked whether the JIT had recorded the statements of the people named on the list given by the high court, there was not a satisfactory response, local media reported.

The court also expressed its displeasure that the Joint Investigation Team had not recorded the witnesses’ statements under Section 161 of the Code of Criminal Procedure. The court remarked that it should serve notice to them for not complying with the court’s orders.

Approving the request of complainant’s lawyer Ehtasham then, LHC Chief Justice ordered the Session Judge Sahiwal to appoint magistrate for inquiry. Earlier, it was reported that during the investigation into Sahiwal incident, the weapons sent into Punjab Forensic Science Laboratory for scrutiny were not the ones used in the killing of four people last month.

Local media reported that the sub-machine guns and 9mm handguns sent for forensic testing were not used in the incident while the police van was transported via truck to the forensic agency despite the fact it was seen being driven away from the scene.

Sources told local media that more than 100 bullet casings, four sub-machine guns, and two 9mm handguns were sent in for forensic testing. The sources said the casings and bullets did not belong to the arms sent. There was no justification to send the 9mm handguns for examination when they were not even used in the shooting, they said.

Umair Khalil, the son of Sahiwal encounter victim Khalil had last week recorded his statement before the Joint Investigation Team (JIT) probing the shootout which resulted in the killing of his mother, father, sister, and uncle.

The experts believe the sub-machine guns used in the incidents were replaced with other arms and sent to the laboratory. In a startling exclamation, sources said that the four bullets that hit the police van also seemed to be fired by the policemen. They said as to how it was possible to drive the vehicle when it’s electronic and fuel system was affected during the course of the encounter as stated by the police.