In a press release issued today, it was announced that hockey trials held by Mari Petroleum Company Limited (MPCL) came to a close at Naseer Bunda Hockey Stadium, Islamabad, on Friday. For Mari Petroleum Hockey Team a group of thirty-six young and promising hockey players from all over the nation has been combined into an imposing hockey team. Selected out of a group of sixty finalists from Gojra, Faisalabad, Lahore, and Islamabad, the aspiring hockey team will be competing on the national stage by the first week of August.

Speaking to the scribe, Brigadier Saleem Nawaz, ex-Director General for Army Sports, mentioned that MPCL had initiated its Hockey Team as an incentive to motivate domestic hockey to greater heights. With CEO and Managing Director for MPCL, Lieutenant General Ishfaq Nadeem Ahmad (retd), at the helm, the initiative tested its young participants in terms of fitness, skill, and mental attitude. 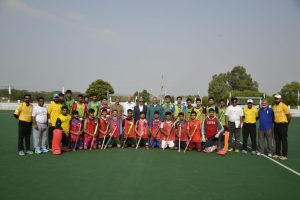 A total of over 270 players took part in the 4-day event which was hosted by MPCL dignitaries and presided over by a bunch of experts including former Golden Player and Hockey senior; Manzoor-ul-Hassan celebrated ex-goalkeeper; Mr. Saleem Sherwani, and former Olympian; Mr. Ayaz Rasool. Brig. Saleem Nawaz and former National Hockey team manager; Lt Col Mohsin Ali (Retd) were also in attendance.

As ardent sports enthusiasts and long-time hockey and tennis players, the top MPCL personalities alongside other mentors, have been previously involved in sponsoring budding players within the industry. MPCL’s efforts were hailed as a much-needed revival for Pakistan’s national sport which has remained dormant for a while now.

The presence of the country’s golden era players at the event was seen as a contribution to the spirit of hockey that such events hope to inspire in the upcoming generations on the national scale. MPCL is not a stranger to the realm of sports and is currently sponsoring two junior tennis players for a year now. So far, Rs.8.7 million has been invested in the two 16-year olds to train and participate in the international circuit. Further assistance for the recent Pakistan WUSHU Federation tournaments in Quetta and six of Junior Pakistan Hockey Team players were made to the tune of Rs.500,000 and Rs.300,000 respectively.

MPCL has made huge strides since its inception in both its field of expertise and in terms of Corporate Social Responsibility (CSR). What was once a partially inherited company supplying raw material for fertilizer production; is now committed to gas and petroleum exploration, production at globally competitive prices, and continues to harbor its age-old relations with various other industry leaders in the country.  In 2012 the company changed its name from “Mari Gas Company Limited” to “Mari Petroleum Company Limited” in light of its expanded business operations and social efforts.

ISO certified for its corporate, manufacturing and social standards, the company has stepped beyond the physical production of resources towards sustainable service delivery especially in regions of its operations. MPCL continues to invest in social welfare with regards to education, health, water supply schemes, philanthropic donations and communication infrastructure.

Selected out of a group of sixty finalists from Gojra, Faisalabad, Lahore, and Islamabad, the aspiring hockey team will be competing on the national stage by the first week of August.

In Sindh, social welfare projects worth Rs832 million have been undertaken in the last 16 years, with Rs245 million in CSR interventions on top of this statutory funding. For the fiscal year of 2016-17 MPCL invested Rs188.7 million in numerous CSR Projects in its areas all over the country’s four provinces.

Apart from area-centric social welfare, and leaning towards invigorating the domestic as well as global sports scene of Pakistan, as an industry leader, MPCL has aided during natural disaster relief efforts.  For its lifelong commitment towards the emancipation of the populace, the company accepted three CSR Awards last year recognizing its efforts in Education & Scholarship, Strategic Collaboration, and Sustainability Initiatives. Would MPCL also snag a national hockey award or will the nation’s top players rise up in competition? Either way, it’s a win-win for Pakistan.

Is US containment of China a new ‘War on Terror’?

Resurging terrorism in Pakistan: What needs to be done?

Tump visit had a major secret project: US plans its own BRI with India