London Mayor got a Bollywood welcome in Mumbai 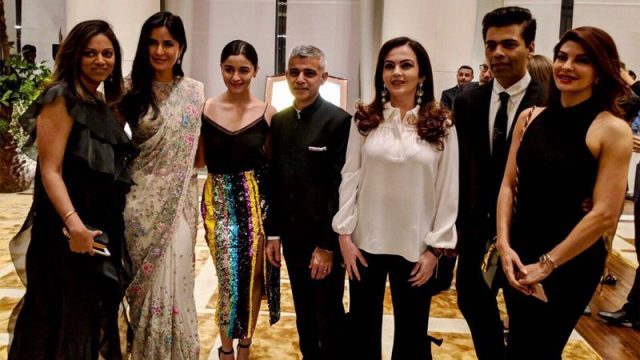 Having received state protocol London Mayor, Sadiq Khan enjoyed a warm welcome from the Bollywood fraternity during his ongoing visit to India.

He is currently touring India and will later visit Pakistan as part of the LondonIsOpen campaign launched by him to show London is open and united. He is leading trade delegations and will visit Delhi, Mumbai, Amritsar, Karachi, Lahore, and Islamabad on his six-day trip.

As the Mayor of London, he hopes to foster the bilateral economic ties of Britain with other non-European countries in the aftermath of Brexit.

Where there is a lot to discuss his progressive achievement as Mayor on this trip, his meeting with Bollywood stars created much hype in the media.

During his two-day visit to Mumbai, he met Chief Minister Devendra Fadvanis and signed a letter of intent for the inclusion of Mumbai as a member city in the list of World Cultural Forum.

He also launched Mayor’s International Business Programme in Mumbai, bringing with him 20 technological start-ups and companies to foster business ties between India and the UK.

Later in the day he met with popular Bollywood artist and posed with them for clicks at a grand reception hosted by India’s billionaire and the owner of Reliance Industry Mukesh Ambani.

Read more: Yet another terrorist attack in London

Cricket legend Sachin Tendulkar was also at the party, with his wife Anjali. Sadiq Khan took to social media to share pictures from the event.

Great to meet British Bollywood superstar @KatrinaKaif. Her success is yet another example of the deep connection between our two great cities and our booming film industries. #LondonIsOpen

Fantastic meeting the godfather of Bollywood @amitabhbachchan in Mumbai tonight. #LondonIsOpen to Bollywood movies and their incredible talent.

An honour to meet cricketing legend – The Master @sachintendulkar. Great to talk about my plans to make London the sporting capital of the world. #LondonIsOpen

Thank you for an incredible welcome, Mumbai. Leaving this wonderful city with a clear message for everyone I’ve met: #LondonIsOpen for business, investment and ideas, and as a place to work, study or visit.

Coke Studio ends with an emotional tribute to Junaid Jamshed

US general praises Taliban’s effective, efficient fight against IS