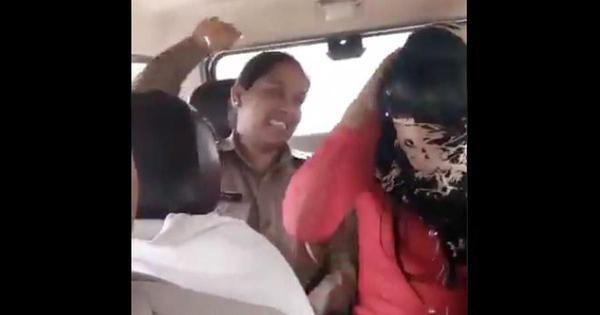 A viral video about an alleged “Love Jihad” case in India has shocked the country. In the appalling video, the victim girl was initially rescued by cops from members of the Vishwa Hindu Parishad (VHP)  who were harassing a Meerut couple on the pretext of Love Jihad. The cops after rescuing the girl from VHP members ,however, began assaulting her in the police van calling her out for choosing a Muslim partner and made a video.

Shocking video of the girl who was rescued by cops from Vishwa Hindu Parishad goons who were harassing a Meerut couple for Love Jihad. The cops after rescuing the girl from VJP goons, began assaulting her in the police van calling her out for chosing Muslim partner and made video.Posted by Unofficial: Subramanian Swamy on Tuesday, September 25, 2018

The woman, a medical student from the majority Hindu community, was allegedly having an affair with a minority Muslim man, also a medical student. The far-right Vishwa Hindu Parishad (VHP), an organization related to the ruling right-wing Bharatiya Janata Party (BJP), found out about their “friendship” and handed the students over to the police Sunday.

Before handing them over to the police, the VHP members invaded the man’s house and assaulted him for conducting “love jihad.” Love Jihad refers to the marriages between Muslim men and Hindu women. Its appeal to communal sensibilities by demonizing the matrimonial relations of Muslim men and Hindu women and thus synchronizes with the communal slogan of “Hindu Khatre Mein hay” (Hindus are in danger). Hindutva fundamentalists use the threat of Love Jihad as one of the many perceived perils to the Indian Hindu community.

Meanwhile, another video relating to the incident has also become viral. In the video, a friend of the Muslim student is being assaulted by VHP members in the presence of the Indian police.

After Meerut Girl was recently attacked by Police for being friends with a Muslim guy, Here is one more shocking video of Goons brutally assaulting the guy's friend in the presence of UP police. Well Done UP Police!True to UP Police Motto "Suraksha Apki (VHP) Sankalp Hamara"Posted by Unofficial: Subramanian Swamy on Wednesday, September 26, 2018

The colluding of the Indian police with the Hindutva groups raises many concerns. For many observers, Indian state institutions have been complicit in the anti-Muslim violence. However, as the attack on the girl shows that the Police is now no longer a silent spectator but becoming a tool of Saffron terrorism.

Senate elections challenged in the LHC