M5 – A Vital Route Secured, Is it time for Peace in Syria?

Russian-Syrian operations in Idlib have reached a defining moment — control of the M5 highway while Turkey threatens a severe offense. It aims to expand its offensive unless the Syrian forces retreat. Erdogan also signals that airstrikes by Syrian and Russian planes in Idlib will be countered.

The de-escalation talks between Moscow and Ankara over the Russian-backed offensive by the Syrian government forces in the northwestern province of Idlib didn’t help defuse tensions.

On the contrary, Turkish-Syrian tensions cascaded and an unraveling of the Russian-Turkish entente may ensue.

Another Turkish delegation is due to visit Moscow to discuss Idlib. This follows visits by two Russian delegations to Turkey last week and a phone conversation between President Vladimir Putin and President Recep Erdogan on Wednesday.

The M5 highway is also critical in linking Syria with the Jordanian border and in the recent past to Turkey’s southern city of Gaziantep, an industrial hub and a center for imports and exports

Turkey is hanging tough. Erdogan threatens to hit the Syrian army and push it behind the 12 Turkish observation posts in Idlib by end-February. He warns that unless Syrian forces retreated, Turkey will expand its offensive. He also signals that airstrikes by Syrian and Russian planes in Idlib will be countered.

According to Erdogan, if the Syrian government establishes complete control over the country, it could threaten Turkey’s security and stability. He has backed his words by moving hundreds of tanks and heavy armor into Syria and significant troop deployments in Idlib.

Meanwhile, the Russian Defence Ministry announced earlier today in Moscow that “a vital transport corridor in Syria — the M5 highway linking the besieged northern capital Aleppo with Syria’s southern cities (Hama, Homs, and Damascus) — has been liberated from terrorists.”

The Syrian news agency SANA further elaborated that in operations on Wednesday, Syrian forces gained control of the Aleppo countryside to the west of M5 highway, which are regions previously held by extremist groups — principally, the al-Qaeda group known as Jabhat al-Nusra,  supported by Turkey.

In sum, the Russian-Syrian operations in Idlib have reached a defining moment — control of the M5 highway. The Russian Defence Ministry highlighted that control over the M5 highway is a game-changer.

Indeed, Turkey understands this fully well too. A commentary on Wednesday by the TRT World, Turkish state media, described M5 highway as “the key to controlling Syria”. It explained,

“The M5 highway is also critical in linking Syria with the Jordanian border and in the recent past to Turkey’s southern city of Gaziantep, an industrial hub and a center for imports and exports. … Functioning as the backbone of the national road network, the M5… has economic importance because it connects the city of Aleppo, which was the industrial capital, with Damascus and also continued to the southern border that was the main highway for transit trade.

“The M5 motorway has further critical extensions to the port of Tartus, home to Russia’s only naval base in the Mediterranean, and Latakia, the home of the Assad family clan and Russia’s largest electronic eavesdropping post outside its territory…

“The recent Assad regime offensive and capture of Saraqib, a town at the intersection between the M4 and M5 in Idlib province, was a strategic coup. Not only did the regime open up a critical part of the M5 motorway leading to North Aleppo but also west to the M4 highway leading to Jisr Al Shughur one of the largest cities in Idlib province and still under rebel control from there to Latakia. Beyond the strategic importance of the highway for anti-regime rebels, controlling the M5 would have meant the physical collapse of the authority of Syrian regime leader Bashar al Assad.”

In retrospect, notwithstanding the warnings and threats held out by Turkey, Moscow was determined for good reason that the operation must be carried forward to its logical conclusion, namely, the liberation of M5 from the clutches of the al-Qaeda terrorist groups.

Turkey may not like that it has been checkmated. The entire Turkish strategy of using terrorist groups as proxies in the 9-year Syrian conflict is crumbling. The battle-hardened al-Qaeda fighters fleeing Idlib in their thousands may flock to Turkey, which could pose an ugly security situation.

Since 2016, Turkey resorted to a strategy of carving out Syria’s northern territories as its “sphere of influence”, but that strategy is no longer sustainable.

On the other hand, the truce reached through the Astana and Sochi talks with Russia and Iran lies in tatters. Turkey’s best bet will be to improve its negotiating position and thereafter seek a new equilibrium with its Astana partners.

But how would Turkey navigate to that point? For Moscow and Damascus, control of the M5 highway is non-negotiable. Erdogan claims Turkey would contest Damascus’ (and Russian) monopoly over air space. But the Turkish air force stands much diminished after the huge purge of officers following the US-backed coup attempt in 2016. 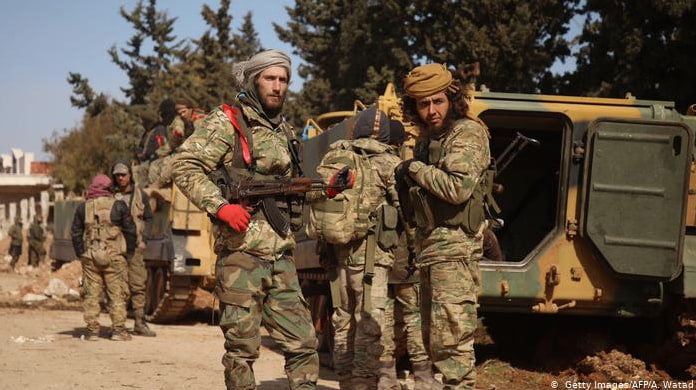 Erdogan will think twice before confronting Russia militarily. The nice words of solidarity from US officials notwithstanding, he’d know that the US-Kurdish axis is pivotal to Washington’s Middle East strategy.

In fact, the US military is already fishing in troubled waters to regain control of border regions with Kurdish population in northeast Syria, which it vacated in a hurry last October following President Trump’s impetuous declaration on troop withdrawal from Syria (which he revoked subsequently.)

Turkey needs to reconcile with the inevitability of the Syrian leadership pressing ahead with plans to regain control of the entire country. That is to say, Russia and Syria may adopt a “salami tactic” and keep hunting down the residual al-Qaeda terrorists.

Turkey’s options have dried up. The way out is to cut losses, which is best done by reaching a renewed understanding with Russia and Iran. The priority should be that Turkey’s core interests are not in jeopardy, especially the Kurdish conundrum in northern Syria.

Clearly, Putin’s priority is to end the conflict and stabilize the Syrian situation. There shouldn’t be a conflict of interests with Turkey. The alternative is for Turkey to team up with the “spoilers” —  the cold warriors in Washington who do not want Russian presence in the Mediterranean and the Saudi regime with its antipathy toward Iran’s rise.

Therefore, a rebalancing of the Turkish-Russian entente is possible — and is to be expected. Moscow keeps good contacts with Kurds and Damascus has common interests with Ankara in regard to the Kurdish problem.

Turkey’s border security is best addressed by fortifying the cardinal principle in inter-state relationships — non-interference in the internal affairs of neighboring countries.

Previous article
Pervaiz Ashraf Acquitted: PTI Bending Over its Rule of “No Corrupt Spared”
Next article
Does FPSC want to clear more Students in English Papers as Compared to Last Year?

Sindh govt to donate 100,000 tents to earthquake victims in Turkiye