The ministerial council is the first since the two countries signed a treaty in January committing to wide-ranging cooperation on areas such as foreign policy, defense and energy. 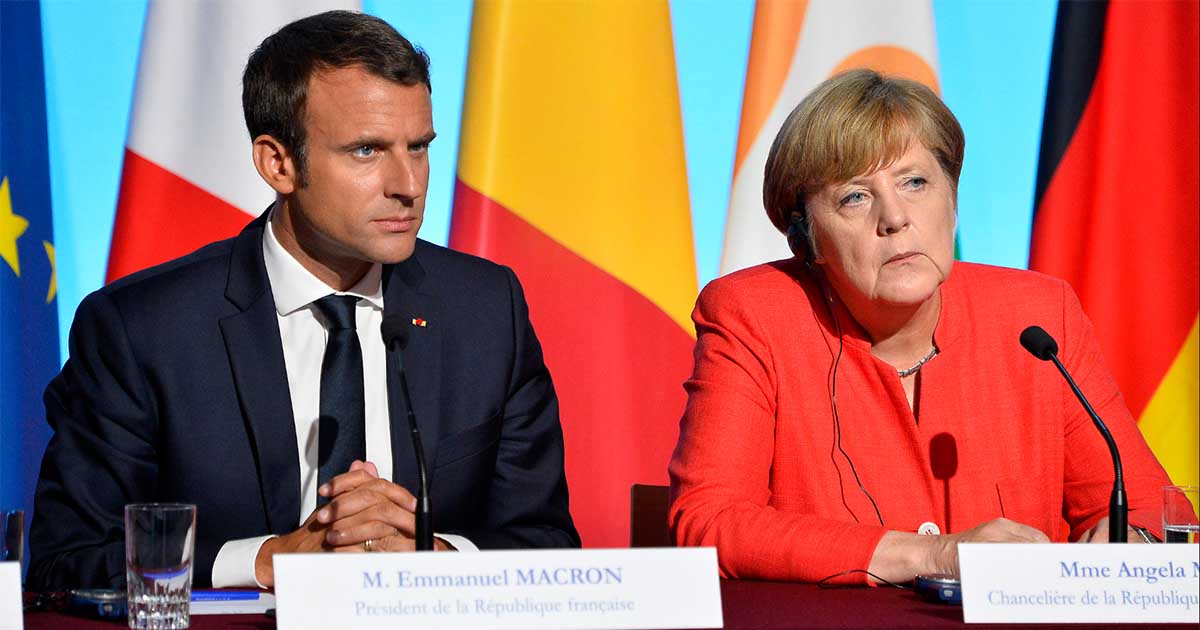 France’s Emmanuel Macron will hold talks Wednesday with Germany’s Angela Merkel for the second time in a week to chart a united front on issues ranging from Brexit to Syria ahead of this week’s EU summit.

Macron goes into the two-day meeting in Brussels starting Thursday still smarting from the rejection of his pick for European commissioner, Sylvie Goulard.

The resounding “No” by European MEPs to Goulard, who has been caught up in an investigation into fake jobs for parliamentary assistants, was seen as a blow to Macron’s drive to boost France’s influence in Brussels.

On Wednesday, the French and German governments will hold a joint ministerial meeting in the southwestern French city of Toulouse to discuss how to move forward with some of the European projects that Macron has championed.

The ministerial council is the first since the two countries signed a treaty in January committing to wide-ranging cooperation on areas such as foreign policy, defence and energy. In a video podcast, Merkel said she and Macron wanted to arrive in Brussels with “common positions in so far as possible.”

After a dinner with Merkel in Paris on Sunday, Macron warned that Europe could “not afford the luxury of petty quarrels” at what he called a “worrisome” time for the international order. They will be joined later Wednesday in Toulouse for talks by incoming European Commission chief, Germany’s Ursula von der Leyen.

Von der Leyen’s visit — also her second to France in under a week — is part of a diplomatic blitz by Macron, who also hosted EU Council president Donald Tusk for talks in Paris on Monday.

The ardently pro-EU Macron is expected to use Wednesday’s ministerial council in Toulouse — home of European planemaker Airbus which he and Merkel will visit — to press Germany on closer defence and industrial ties.

French and German governments will hold a joint ministerial meeting in the southwestern French city of Toulouse to discuss how to move forward with some of the European projects that Macron has championed.

French presidential sources said Paris and Berlin would also attempt to develop common rules on arms exports, a bone of contention between the two powers, with France failing to follow Germany’s lead last year in halting arms sales to Saudi Arabia over the killing of journalist Jamal Khashoggi.

A French presidential advisor defended Franco-German cooperation, saying that while it was “often put to the test”, in the end it “always moves forward on the essential topics”. Macron and Merkel are also expected to discuss the make-up of the incoming European Commission after the thumbs-down for Goulard, as well as the Hungarian and Romanian candidates.

But a French presidential aide said Tuesday that Macron would not announce a new candidate until he was assured of the support of the main groups in the European Parliament, who voted down Goulard.

Turkey’s offensive in northern Syria and the tentative progress made in talks between the EU and Britain on a revised Brexit deal are also expected to loom large over Wednesday’s talks in Toulouse and the EU summit in Brussels.

EU leaders have condemned Turkey’s operation against the Kurdish fighters who toppled the Islamic State group’s so-called caliphate earlier this year, warning that the Sunni extremists could take advantage of the offensive to regroup.

Macron would not announce a new candidate until he was assured of the support of the main groups in the European Parliament, who voted down Goulard.

French Defence Minister Jean-Yves Le Drian told parliament on Tuesday that the decision by the US to withdraw its troops from northern Syria, seen as a green flag for the Turkish invasion, had underscored the need for “European sovereignty” and “European strategic autonomy.”

Read more: May tries to save Brexit plan ahead of EU summit

On Brexit, by contrast, there was an air of cautious optimism in Paris on Tuesday, with a French presidential aide hailing the “positive momentum” in talks on the terms of Britain’s exit from the EU.

The remarks represented a marked departure in tone from Paris, which has said repeatedly in recent weeks that it considers a no-deal Brexit on October 31 the most likely scenario.

Where Theresa May went wrong