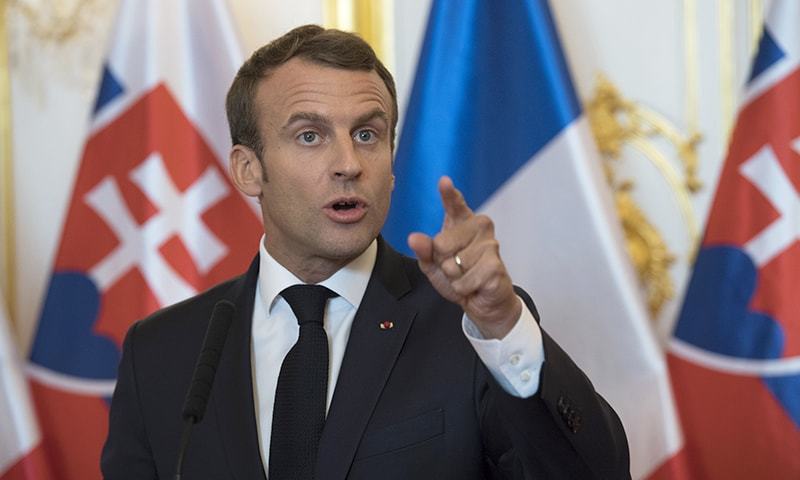 French President Emmanuel Macron on Friday brushed off pressure to halt lucrative arms sales to Saudi Arabia over the murder of journalist Jamal Khashoggi, saying such calls were “pure demagoguery”. Sales of weapons to Riyadh — France’s second biggest customer after India — have “nothing to do with Mr Khashoggi. One shouldn’t mix everything up,” Macron told a press conference during a visit to Bratislava.

“I greatly admire those who, even before they know anything, say ‘We won’t sell any more weapons’!,” the French leader said in an apparent reference to Germany. “They sometimes sell more than France thanks to their joint ventures,” he added.

The remark was interpreted as a rare veiled criticism of France’s closest European ally after German Chancellor Angela Merkel announced a freeze on arms sales to Riyadh over the dissident’s murder inside the Saudi consulate in Istanbul. Merkel confirmed her position during a visit to Prague on Friday.

France wants the plane to be fully exportable — “including to countries in crisis like Saudi Arabia” — and has threatened to walk out if this is not the case, the magazine reported.

“We need to clarify the background of this horrible crime and until that, we will not supply weapons to Saudi Arabia,” she said. She also called on Saudi Arabia to help end the devastating humanitarian crisis in Yemen, which Riyadh has been pummelling with air strikes since 2015.

“We shall, of course, confer within the EU to work out what future steps we shall take,” she added.

Macron meanwhile insisted there was no moral link to be made between the death of Khashoggi at the beginning of this month and Saudi Arabia’s purchase of French-made weapons. “What is the link between arms sales and Mr. Khashoggi?” he said, calling it “pure demagoguery to call for a halt” to exports over the killing.

“I can understand the link with Yemen, but there isn’t any with Mr Khashoggi. If we want to take sanctions, we must do so across the board. In that case, we should stop selling cars,” he told reporters — another possible dig at Germany, a massive auto exporter.

Otherwise “we should take individual sanctions against those responsible”, Macron suggested. The French president defended close Western ties with Riyadh as crucial in a range of areas, from the fight against the Islamic State militant group to oil supplies from the OPEC producer.

The remark was interpreted as a rare veiled criticism of France’s closest European ally after German Chancellor Angela Merkel announced a freeze on arms sales to Riyadh.

“There is strong cooperation with most Western countries, with military relations, which are clear and totally transparent,” Macron said. He said he was “waiting for the facts to be clearly established and for those responsible to be known so as to draw lessons and sanctions”.

Sanctions should come as “a European response” and be “clear and coherent… in all domains”, the French leader said. After India, Saudi Arabia was the second-biggest purchaser of French weapons between 2008 and 2017, with deals amounting to some 12 billion euros ($13.8 billion).

Germany meanwhile last month approved 416 million euros worth of arms exports to Riyadh for 2018. In the past, its military exports have mostly consisted of patrol boats. Germany’s Economy Minister Peter Altmaier, a close Merkel ally, has called for European nations to take a joint stance on whether to halt arms exports.

“There won’t be any positive effects if only we halt exports and then other countries fill the gap,” he warned earlier this week. “Only when all European nations are in agreement will this make an impression on Riyadh.”

German weekly Der Spiegel reported Friday that differences between Berlin and Paris over the Saudi issue had prompted the French government to call into question a high-profile project developing a joint fighter jet. France wants the plane to be fully exportable — “including to countries in crisis like Saudi Arabia” — and has threatened to walk out if this is not the case, the magazine reported.

Read more: Khashoggi Murder: MBS woes are far from over?

Austrian Foreign Minister Karin Kneissl meanwhile suggested a joint EU ban on arms exports to Saudi Arabia could help bring the brutal Yemeni conflict to an end. Austria has exported no military equipment to Saudi Arabia since it began its bombing campaign, she said.

But “if as a whole European Union we stopped arms deliveries to Saudi Arabia, that could help bring these conflicts to an end,” she told Germany’s Die Welt newspaper.

Previous articleAfghans risk their lives to vote in delayed Kandahar poll
Next articleIGP Islamabad Transfer: Real Story behind the headlines

Deal, no deal or no Brexit? The Brexiteers’ dilemma