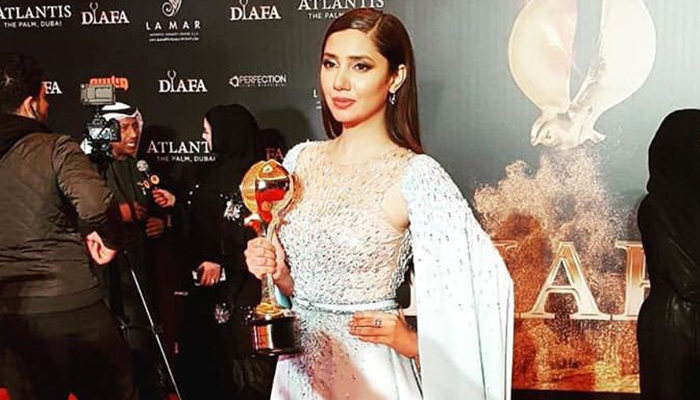 Pakistani actor Mahira Khan has received an award at Distinctive International Arab Festival Awards (DIAFA) for her contribution towards the arts and entertainment industry.

The International Festival is held annually that features famed personalities from various fields. DIAFA honors celebrated and popular celebrities who have been contributing positively towards their societies and communities.

Looking for Reliable Fixing and Cleaning Services in Dubai?

Mahira Khan dazzled in her ice blue Labor Joisie gown. While receiving the award Mahira stated that “Art connects everyone. When we win awards outside of our country, it feels way more special.” It is the third edition of the annual awards held on Friday, February 8th, at The Atlantis Dubai.

Read more: Fawad and Mahira Khan ready to fire up the entertainment industry…

Later this month Mahira Khan will attend the fifth edition of literature festival Jashn e Rekhta in Dubai alongside Pakistan’s popular director Sarmad Sultan Khoosat and Indian actor Ali Fazal. Mahira Khan will be a part of the panel discussion that will discuss the contribution of Urdu. The three-day festival is organized to promote Urdu language and promote its literature and culture.

Mahira Khan is also set to make the waves this year with her movies in the pipeline ready to be released this year. She will be featured in three movies: Parey Hut Love, Legend of Maula Jatt, and Superstar.

Her progression in the list heralds her growing fame and success internationally. After captivating people back home in Pakistan, Mahira Khan has appreciably grabbed the attention of the international audience as well. If she continues to accelerate in the world of entertainment she might soon appear in international ventures as well.

Did Trump love India during the visit?