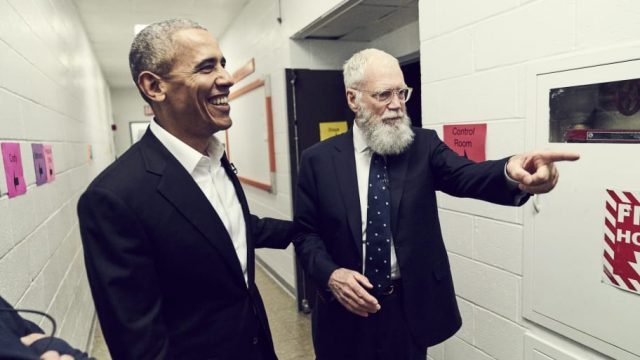 Malala Yousafzai appeared on David Letterman’s Netflix Talkshow ‘My Next Guest Need No Introduction’. The young Noble Laureate from Pakistan was the third and the first female guest on the show following George Clooney and Former US President Barack Obama, who appeared in the first episode of the show.

Malala Yousafzai, in her interview with David Letterman, took a dig at current US President Donald Trump’s regressive policies that imposed the ban on Muslims and his administration’s proposal that slashed the funding for education in their budget. She also talked about her traumatizing experience of shooting as a schoolgirl back in her hometown Swat, Pakistan.

David Letterman asked, “What do you think about President Trump?”.

Instead of answering to him, Malala threw the question back at him.

Letterman laughed, telling her, “I have many things to say on this topic. And you want me to be candid, right?”

She then said, “I know, a ban on Muslims! And I’m a Muslim. Some of the things have really disappointed me, things about sexual harassment and a ban on Muslims and racism. You see all these things and you feel that America, is known for human rights and a country of liberty and freedom, that country should be leading in terms of human rights.”

“This is really tragic that this is happening, and it does worry me that these leaders, they talk about eradicating extremism and ending poverty and then they ignore education. That’s the first thing you need to do, you need to give education to the future generation and allow them the opportunity to follow their dreams and then contribute to their economies and their countries,” she added.

She also spoke about her recovery and the immense support she and her family received from the international community in the aftermath of the incident.

She added that it is unfortunate that in many countries and communities girl’s education is not given importance. The idea is to marry the girls because investing in their education is deemed as a waste of money.

She said the people don’t realize that a girl’s education can lead to their empowerment.

“The governments need to invest more money into education. Business people, everyone who is part of society, they need to start thinking about investing in girls and their education. We just need an ambition and an intention. What to do is then easy,” said the Nobel Prize laureate.

Read more: Malala and Mahira the most popular Pakistanis on Wikipedia in 2017

When asked about Taliban, Yousafzai responded that they misinterpreted the world and Islam to back up their claims that women should not attain education and that it’s a typical superiority complex.

“But sometimes I think they are more clever than some other leaders in the world because they knew that education can impact women, and they recognized that,” Yousafzai said.

When asked if she will pursue her career as a politician after her studies, Yousafzai said, she has no plans to follow politics since she has already dedicated her life for the purpose of girls education.

Previous article‘Internal Security’ being provided by Pakistani troops in KSA: Khawaja Asif
Next articleSenate defeat a prelude to approaching doomsday for Nawaz?

16 September 2021
Previous article‘Internal Security’ being provided by Pakistani troops in KSA: Khawaja Asif
Next articleSenate defeat a prelude to approaching doomsday for Nawaz?

2017: The Year When Cricket Returned to Pakistan!