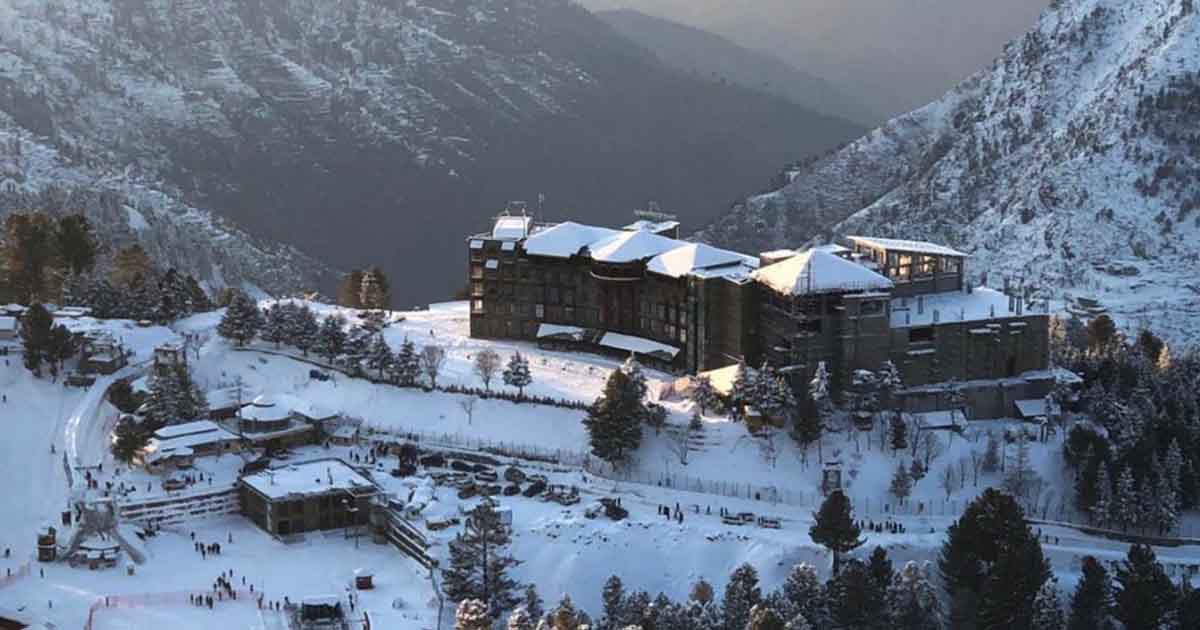 Pearl Continental Hotel Malam Jabba has launched Pakistan’s first ever five-star mountain & ski resort. The tourist spot opened its doors to guests and travelers in 2019. Moreover, the resort is introducing adventure sports with five-star facilities at one of the highest altitudes in Pakistan – Malam Jabba, Swat.

Malam Jabba is the first and only private ski resort in Pakistan and is recognized as one of the most scenic tourist destinations in the country. It overlooks the majestic Hindu Kush Mountains, hence, making it a tourist heaven for families, corporates, nature lovers and adventure enthusiasts.

Malam Jabba is an unbelievably scenic hill station in the Hindu Kush mountain range nearly 40 kilometers from Saidu Sharif in Swat Valley.These haunted hills offer potential ski slopes at 9200 feet above sea level. Furthermore, they are located 300 km away from Islamabad and almost 50 km from Saidu Sharif Airport, in Swat.

Malam Jabba and its history

The hilly paradise has seen good and bad times in the past century. It started as a princely state in 1926 and remained so till 1969, when Yousafzai clan relinquished its dynasty. After that, the princely state was incorporated into the North-West Frontier Province of Pakistan (now Khyber Pakhtunkhwa).

Since then, several efforts were made to turn Malam Jabba into a ski resort. This idea was originally conceived by the visiting Austrian ambassador to Pakistan in 1962. After exceptional delays and a lot of new government entities, a hotel was built in 1988. This happened with monetary support from the Viennese government and the last Yousafzai wali.

However, the hotel and ski resort in Malam Jabba sat idle for another 10 years. Disputes between the government and the private sector were responsible for this. Eventually, the ski resort and hotel took off, managed by PTDC of the federal government. By 2006, over 20,000 people in Swat were employed indirectly by tourism to the region, including the resort.

Unfortunately, this was a short-lived joy. In 2007 Pakistani Taliban (TTP) took control of Swat valley and military action followed to displace them. Tourism, skiing infrastructure, businesses and overall public confidence in future of Swat took severe beating during this period. The resort at Malam Jabba, the PTDC hotel, was converted into a stronghold for Taliban fighters – a kind of command and control center.

The future of Swat and Malam Jabba

Swat is now as calm and peaceful as the northern areas come. Fortunately, it has been rising up the fame ladder to become one of the hottest tourist spots in Pakistan. The new ski resort is expected to attract many international tourists and do wonders for the tourism industry. Situated around 30 km from Mingora, Swat, the newly opened hotel sits atop the Malam Jabba Hill Station, 2,650 metres above sea level, with eye-catching views of the scenic Swat Valley.

This PC Hotel offers skiing, snowboarding and snow-tubing in the winters and hiking, horseback riding and zipline in the summers. Hence, such a host of activities makes the resort an ideal vacation spot for guests at one the most exciting destination of Pakistan!

Note: Conforming with the directives issued by the government of Pakistan, Pearl Continental Hotel Malam Jabba is not taking reservations currently. This is to help contain the COVID-19 crisis.

Qatar Airways: Journey towards providing best service in the World