Manzoor Pashteen’s article in The New York Times: Who wrote it? 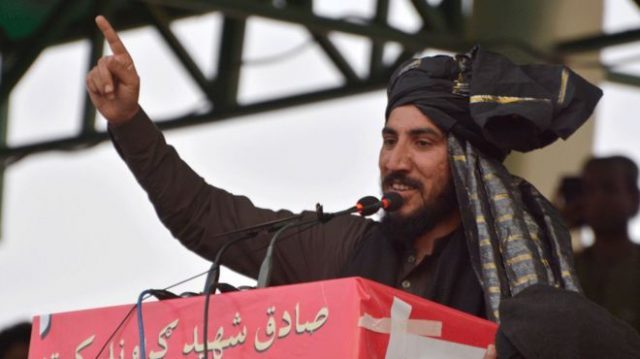 Federal Minister for Information Mr. Fawad Chaudhary questioned that who wrote an article for Manzoor Pashteen, leader of Pashtun Protection Movement (PTM), which he got published in The New York Times. Mr. Chaudhary was speaking to prominent anchorperson Dr. Moeed Pirzada in his talk show, “Live with Moeed Pirzada” at GNN when he asked: “do you think the article published under Manzoor Pashteen’s name was actually written by him?”

Both the anchorperson and minister agreed and maintained that the piece was written by someone else. It is important to mention here that Manzoor wrote an article and he criticized Pakistan’s Armed forces and accused them of violence and intimidation. “We held numerous sit-ins and protests and continued to hope that Pakistan’s leaders would try to address our concerns. Instead, they responded with intimidation and violence,” he alleged.

Manzoor Pashteen’s article was less focused on the demands of right and more on maligning the security agencies. In this era of information technology, wars fought on information front are way more lethal than those in battlefields.

Interestingly, Manzoor also accused the security establishment of ensuring that “almost nothing is reported about our movement in the mainstream Pakistani newspapers and television networks.” But it is worth mentioning here that the PTM gets its due coverage not only in print media but also in electronic media of Pakistan. For many analysts, the piece was intended to vilify the army and spy agencies of the country.

Fawad Chaudhary also added that many people on social media believe that allowing PTM’s anti-army narrative is freedom of speech. “It needs to be understood that this is the question of national security. You can’t allow anyone speaking against the security institutions and issuing fatwas. We need a formal framework to control social media and fake news,” he told Dr. Moeed.

Read more: Manzoor Pashteen spoke up in Lahore; what’s the solution to their…

It is pertinent to mention here that the government has decided to initiate a crackdown against fake IDs on social media and arrest those involved in hate speech and the spread of violence. Mr. Ch. also pointed out that informal media is becoming more influential than the formal one. Therefore, we need, he added, a well-designed framework of regulation and control.

Experts in Pakistan maintain that this is the time of 5th generation warfare where the enemy is not visible to us but the war is being fought all the time on digital media. PTM is accused of being in foreign hands and initiating an anti-military movement which intended to weaken the security establishment of Pakistan. Therefore, it is argued to have a check over its demands and protests in Pakistan.

Manzoor Pashteen’s article was less focused on the demands of right and more on maligning the security agencies. In this era of information technology, wars fought on information front are way more lethal than those in battlefields. Therefore, tackling the information front indeed is the government’s job; no state allows demeaning its agencies and security establishment. Pakistan is not an exception.

It is not a hidden truth anymore that PTM is being run by the state’s foes. Manzoor Pashteen’s article itself could never get space in NYT without strong backing; the reason minister stated it was actually written by someone else.

Qureshi-Tareen tirade: What is the master plan?

Op-ed: India has been exposed yet again the world remains silent