March towards Islamabad: What PPP is up to? 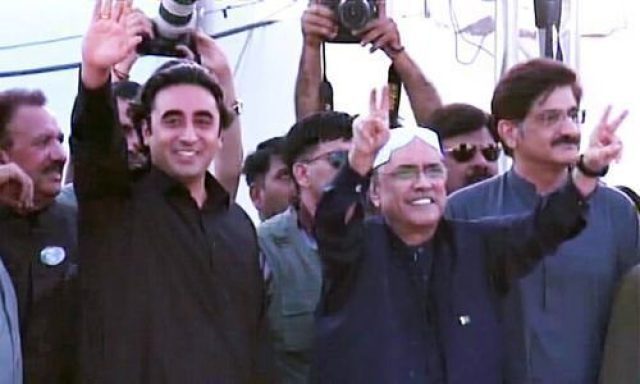 Asif Ali Zardari, former President and co-chairperson of Pakistan People’s Party (PPP), on Thursday urged his party’s supporters to “march towards Islamabad” and oust the government. Mr. Zardari repeatedly told his supporters that the incumbent government wanted to repeal the 18th amendment. “Before the elections, I told you that they want to repeal the 18th Amendment. That’s why they are lodging cases against us. At the time, some friends believed me and some people made fun,” he said.

Mr. Zardari said all this while addressing a gathering in Garhi Khuda Bakhsh on the occasion of PPP founder Zulfiqar Ali Bhutto’s 40th death anniversary. He encouraged the PPP workers to stand up against the government and throw it out of the power. “It is time for us to march towards Islamabad and oust them [government]. I don’t want to do this because I want to be in government; [it is because] he (Prime Minister Khan) has already taken the country 50 years back. If we allow him to remain, he will take us 100 years back.”

The extent of PPP’s relation to Zulfikar Bhutto can be likened to PML-N’s relation to Muhammad Ali Jinnah,” he said. “For how long will they keep on selling their relation with Bhutto and Benazir’s name?

Bilawal Bhutto Zardari, the chairman of the party, criticized the government and warned the prime minister to not attempt to repeal the 18th Amendment. “Those who are sitting in the Prime Minister’s Office have become a symbol of arrogance. Those who are parading the idea of Naya (new) Pakistan should first understand the foundations of the old Pakistan,” he said.

PPP Chairman termed the PM as ‘selected puppet’, lashed out at poor economic policies of the incumbent government and reminded PM Khan not to expect anything from the people of Sindh. He was also critical of the Supreme Court’s decision to take suo moto in fake accounts case. “The Supreme Court’s power [of suo motu] is only exercised in human rights cases or legal complications,” he noted. “Why was it exercised in this (fake accounts) case?”

Information Minister Fawad Chaudhry who was apparently unfazed by Zardari’s indication to march towards the capital questioned that “if the PPP respects the courts then why and against whom has it announced the march?”

Read more: Will PPP’s Caravan-e-Bhutto be a successful campaign against the government?

Moreover, Federal Minister also suggested that “it would be better if they march against their own corruption,” he advised, adding that “had Bhutto sahab been alive today, he would have also launched a protest march against the PPP’s corruption.” Chaudhry said that it is normal for “corruption fiends to resort to protests when their addiction is being treated”.

The minister suggested that the PPP of today only has a superficial resemblance to that of Bhutto’s PPP. “The extent of PPP’s relation to Zulfikar Bhutto can be likened to PML-N’s relation to Muhammad Ali Jinnah,” he said. “For how long will they keep on selling their relation with Bhutto and Benazir’s name?”

Chaudhry made it clear that “speeches, clamor, and threats would not save them from accountability, adding that “you can take to the streets but then the public would itself settle scores with you.

On the other hand, the court has issued pre-admission notice to Mr, Asif Ali Zardari in disqualification case sought a reply from him within two weeks, while hearing the case yesterday, on April 4.

Congratulations to the nation. Notice issued to Asif Ali Zardari in concealment of Assets case number #420 that I've filed against him based on Article 62-1F of the Constitution.#case420

The petitioner alleged that Zardari concealed details pertaining to ownership of an apartment in New York City, United States, in the nomination papers filed ahead of the general elections. He also failed to disclose two bulletproof vehicles, thus violating Article 62(f)(i) of the Constitution and Section 231 of the Election Act 2017, they maintained.

They alleged that both the apartment and the armored vehicles were not disclosed in Form B of the nomination papers filed by Zardari on July 6, 2018, as a candidate for NA-213.

“Zardari occupies more than one office apart from co-chairing PPP, he is also president of Pakistan People’s Party Parliamentarians (PPPP) which was a violation of Article 63 (a) of the Constitution” they added.

Experts maintain that the constitution and amendments are subject to debate and changes, therefore, it should not become a political tool to seek vested political interest at the cost of national interests.

It is also pertinent to mention here that an accountability court will hear the reference filed by the National Accountability Bureau (NAB) in fake accounts on 19th April.

PTI has repeatedly clarified that there was no question of repealing the 18th amendment and that the PPP should stop spreading misinformation. Foreign Minister, Speaker of the national assembly, and the information minister have sparely denied any plan to amend or repeal the 18th amendment.

Analyst Amir Raza in prime-time show Live with Moeed Pirzada argued that the PPP was trying to pressurize the sitting government to evade accountability drive. “Even if the government or anybody else starts talking about amending or repealing the 18th amendment, why is it unacceptable for the PPP? Can the parliament not make changes to it? It’s nonsense to not let anybody comment on the constitution which is subject to change according to changing socio-political realities,” he maintained.

Read more: PPP’s apprehensions over the 18th Amendment: Propaganda or struggle for provincial…

Experts maintain that the constitution and amendments are subject to debate and changes, therefore, it should not become a political tool to seek vested political interest at the cost of national interests. In the present case, the ruling party is not making any plan to repeal the amendment.

Previous articleChild abuse: What Pakistan must do to curb it?
Next articleThe three women hoping to upset India’s Modi at the polls

17 September 2021
Previous articleChild abuse: What Pakistan must do to curb it?
Next articleThe three women hoping to upset India’s Modi at the polls

PPP and PMLN alignment is a ’marriage of convenience’: Ali Muhammad Khan