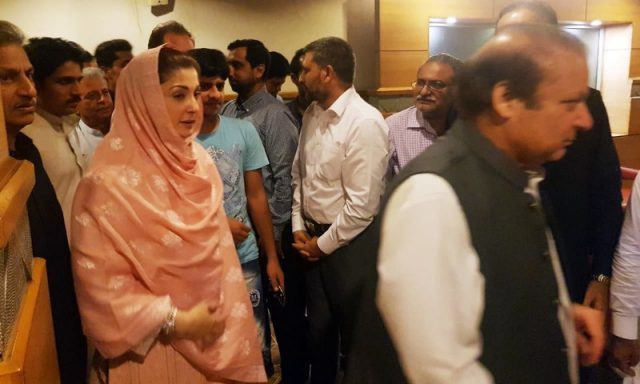 Nawaz Sharif, former Prime Minister of Pakistan, has once again reportedly declined to be shifted to hospital despite “heart issue and poor health”. His daughter, Maryam Safdar, took to Twitter on Wednesday and said: “Mian shb said I am not ready for insult in the name of visiting hospital and treatment when me, grandmother and Shahbaz Sharif urged him.”

Nawaz’s daughter has repeatedly claimed that his father is not well and the government is not willing to pay any attention. To demonstrate the seriousness of the matter she tweeted and announced that “Thursday is fixed for meeting with Nawaz Sharif, however, owing to his poor health, no meeting is possible for tomorrow.”

Former Chief Minister of Punjab, Shahbaz Sharif also tweeted and said “Met Mian sb earlier today. He has severe pain in his arm, which is, God forbid, symptomatic of something serious. Tried to convince him to shift to hospital but to no avail. I appeal to all friends, supporters and the people at large to pray for his health!”

Met Mian sb earlier today. He has severe pain in his arm, which is, God forbid, symptomatic of something serious. Tried to convince him to shift to hospital but to no avail. I appeal to all friends, supporters and the people at large to pray for his health!

It deserves merit to be mentioned here that recently the Islamabad High Court (IHC) has rejected a bail plea filed by the legal counsel of Nawaz Sharif on medical grounds. The court after getting expert’s opinion has maintained that Nawaz’s treatment is possible in Pakistan and there is no medical compulsion to release him. The PML-N has decided to challenge the decision of the IHC in the apex court.

If Mr. Sharif gets more public sympathy, he will become politically alive and may be in a position to demand a deal from the establishment on his own terms.

Political analysts view that since the legal battle for Nawaz has become difficult to win, therefore, he has decided to bring the sitting government under pressure by using health card. Maryam Safdar has used emotional tweets to compel the government and courts to release Nawaz Sharif so that he may leave the country.

It is also important to note that in Pakistan it has become an established norm now that anyone who is powerful and commits a crime falls ill. There are many examples like Dr. Asim Hussain, former head of Higher Education Commission of Pakistan who has now been allowed to leave the country on medical grounds, PPP leader Sharjeel Memon, PML-N’s Muhammad Ishaq Dar, and Shahrukh Jatoi, a young man from Sindh who murdered a son of a police officer in Karachi. All of these men were provided with better health facilities at hospitals to keep them away from the prisons.

The matter came into limelight when Chief Justice Asif Saeed Khosa asked why everyone who was arrested by NAB fell ill and remarked that NAB should construct a state-of-the-art hospital to treat those people. He further said that some people were exploiting the law that allows prisoners with health problems to be transferred to a hospital. “It has become a regular practice,” he claimed. “Medical boards grant favors to people accused of crimes.” Justice Khosa was hearing Sharjeel Memon’s bail application in December 2017.

In the case of Mr. Nawaz and his illness his family wants the government to let him be treated in a hospital and on the other hand, Mr. Sharif himself wants to stay in prison. Doctors have also suggested that his treatment is possible in Pakistan; therefore, there is no plan to send him to London or anywhere else. As a matter of fact, the current situation reflects that the opposition wants the government to let Mr. Sharif go to London for his treatment but Sharif wants this on the condition that public gets an impression as if he is going genuinely for his treatment. The illness is being used as pressure tactics by Mr. Sharif’s daughter and his close aides.

Some observers also believe that emotional statements and tweets from Maryam Safdar will help to gain Mr. Sharif sympathy which may lead to more public support. If Mr. Sharif gets more public sympathy, he will become politically alive and may be in a position to demand a deal from the establishment on his own terms. Hence, emotions being expressed by Mr. Sharif’s daughter are politically calculated.