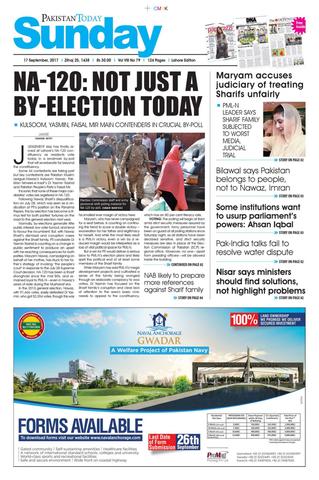 On Saturday, Maryam Nawaz visited NA-120 Lahore and reaffirmed her party’s will to fight the hidden hand trying desperately to undermine PML-N’s resolve to let democracy prosper in the country. She was in her mother’s (Kalsoom Nawaz) constituency to monitor the progress of the development work in the area.

While talking to media, Maryam Nawaz reiterated that “time has changed and people are no longer scared. People speak and don’t feel afraid anymore”.

When asked about the fate of those 72-parliamentarians willing to part ways with PML-N, she was surprised that it could be anyone’s wish, but it has nothing to do with reality. She enquired, “Where are these 72-lawmakers who are on the verge of leaving the party? I cannot see them. PML-N is intact, and those willing to break it will be defeated’, she remarked courageously.

Read more: Maryam takes a swipe at judiciary yet again

The rumors were abuzz on Thursday in political circles of Islamabad that 72-members of national assembly received threatening phone calls telling them not to attend the National Assembly (NA) session. It is believed that the unknown forces are attempting to create an impression that there is unrest among the PML-N legislators and the party is on the verge of breakup.

Maryam Nawaz has kick-started her election campaign, and it looks evident that she is poised to contest the 2018- general elections from this very constituency. She participated in discussions with various groups of supporters about the upcoming elections.

Political analysts had already predicted that Maryam would be the candidate from this constituency. With Kalsoom suffering from lymphoma, she most likely will not be participating in next general elections. She ran the relentless campaign from the same constituency for her mother who was under treatment in London hospital. She is very much aware of the electorate and has bonded closely with the supporters of PML-N.

Ex-Prime Minister Nawaz Sharif is also embarking on a journey to Abbottabad-College ground today to woe the voters for the upcoming general elections. It will be a start of the massive campaign across the country to reach out to loyal supporters.

Why would Nawaz start the election campaign this early? It is evident that noose is tightening around Sharif family.

Firstly, the indictment in three NAB references and the failure to convince the apex court to club the three references into one has augmented the hardships at the Accountability Court.

Secondly, failure of Hassan and Hussain to attend the court hearings despite many reminders and subsequent affirmation in which both the British nationals are declared absconders has not gone well with PML-N.

Moreover, on NAB Lahore’s recommendation, NAB chairman, Mr. Justice Javed Iqbal has penned a letter to the ministry of interior to put both the brothers on ECL is indeed an alarming situation for the house of Nawaz.

Finally, according to political analysts, NAB may seek the cancellation of their passports, after putting their name on ECL.

Nawaz knows if he fails to broker a deal through his lobbyists across the Atlantic and influential supporters in Kingdom of Saudi Arabia (KSA), it may not be possible to stop the NAB blitzkrieg of countless proofs in all three references – London flats, Flagship Investment Ltd and Azizia Steel Mills.

Hamza Sharif’s visit to his constituency NA-119, Maryam Nawaz visit to NA-120 and planned streak of jalsas by Nawaz depict their firm belief that only way to avert the looming crises is winning the next elections comprehensively. Nawaz knows, playing the victim is easier than confronting and accepting the reality.

Previous articleIs India eyeing to become a new power in Asia Pacific?
Next articleWe support corruption purge in Pakistan: Saudi envoy! Yet another blow to Nawaz?

Is PML-N trying to drive a wedge between PPP and PTI?