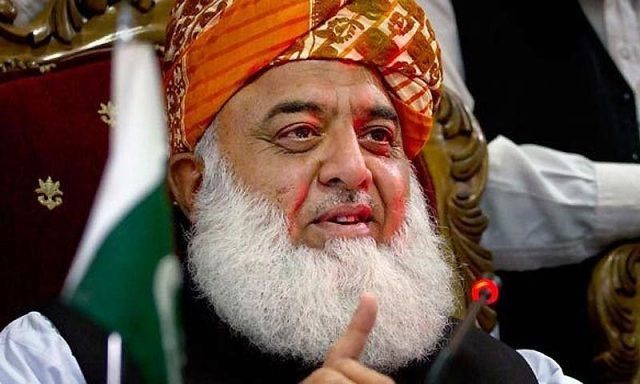 Jamiat Ulema-e Islam (F) chief Maulana Fazlur Rehman on Wednesday stated that they would not accept ‘fake prime minister [Imran Khan]’ at any cost while demanding resignations from officials of Election Commission of Pakistan (ECP) over their failure to hold transparent elections. He was addressing protest rally outside ECP headquarters.

However, a portion of his speech raised concerns among the people of Pakistan as they perceived him spewing hatred against the Armed forces as well as the country itself. In the controversial part of his address, the JUI(F) chief can be seen calling for the nation’s 71st Independence day celebration while also threatening the Pakistan Army.

Blaming it for bringing the PTI to power, Fazlu Rehman stated that such actions would force them to be viewed as “Western agents” by him and his supporters. Such language is mostly used by terror groups such as the Tehreek-e-Taliban Pakistan who spring from the same school of thought i.e. Deoband as the Jamiat-Ulema-e-Islam.

Startlingly, the heads of Pakistan Muslim League Nawaz (PML-N) Shahbaz Sharif and Pakistan Peoples Party (PPP) Bilawal Bhutto did not join the protest rally. During the same rally, PPP leader Khurshid Shah opted for a parallel stance to the rest of the “Grand Opposition Alliance” as he stated to provide Imran Khan ample space to run a government.

Why the world should take India’s surgical strike hysteria seriously?