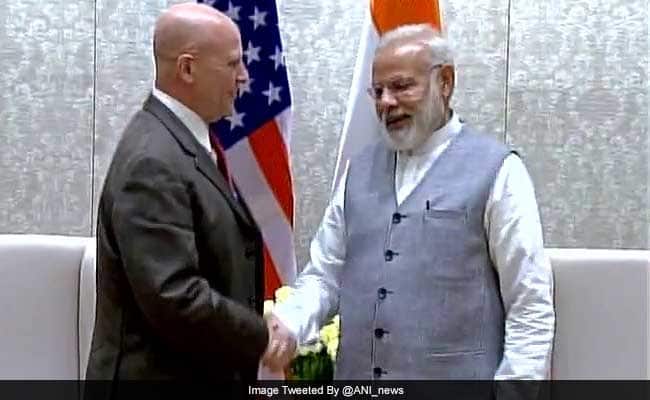 The US President’s National Security Advisor, HR MacMaster, discussed the situation in Afghanistan with the Indian Prime Minister Narendra Modi. The meeting held on Tuesday nearly a week after the US military dropped a massive non-nuclear bomb – Mother Of All Bombs – on IS hideouts that it said killed 95 militants.

NSA McMaster emphasised the importance of the US-India strategic relationship and reaffirmed India’s designation as a major defence Partner,” a statement from the US embassy in India read. The two sides discussed a range of “bilateral and regional issues, including their shared interest in increasing defence and counter-terrorism cooperation”.

Mr McMaster also met his Indian counterpart Mr Doval to discuss Indo-US relations especially the security aspect of the ties. New Delhi wants Washington to pressure Pakistan to stop its support for Taliban militants and act against them.

McMaster’s visit to New Delhi was a part of regional consultations that included stops in Kabul and Islamabad. Mr McMaster had replaced Michael Flynn a few weeks after President Trump took over following a controversy about Russian diplomats during the transition and election campaign.  He is seen as having a very positive view about India.

MacMaster also visited Islamabad before visiting India to meet Prime Minister Nawaz Sharif. During his meeting with Prime MinisterSharif, the US NSA had hinted that Washington could take a tougher stance on Pakistan if it failed to act against certain Taliban militant groups including Haqqani Network.

Pakistan & Afghanistan are on road to peace but it’s bumpy