The stunning actress lends her services for yet another social awareness project of raising awareness on girl child rights. The Tamgha e Imtiaz winner is known for her strong stance for women empowerment. 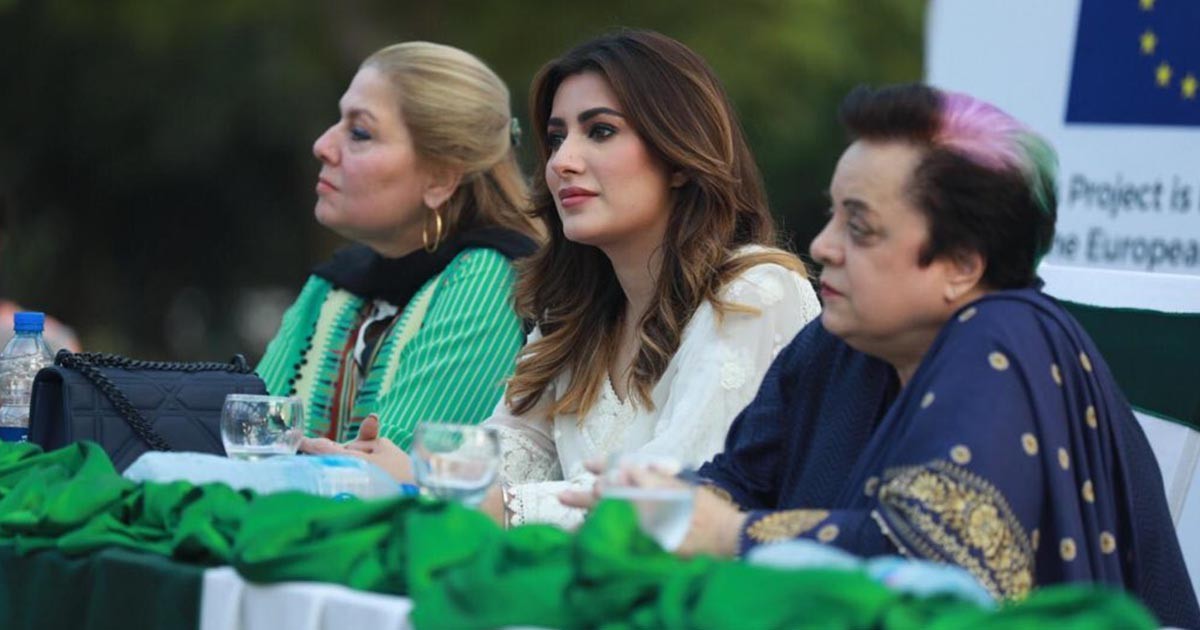 A ceremony was held in Islamabad’s Lok Virsa in collaboration with European Union. Federal Minister of Human Rights Shireen Mazari and Mehwish Hayat graced the event. The event also saw the launching of a ‘Truck Art‘ Campaign to disseminate the messages of awareness on girl child rights across the country.

Pleasure to be at the launch of the Ministry of Human Rights’ new initiatives for the girl child & meet some inspirational women like @ShireenMazari1 . Was impressed to see innovative ways like truck art to get the message out. looking forward to doing a lot more for this cause. pic.twitter.com/xt8Wa410sZ— Mehwish Hayat TI (@MehwishHayat) October 11, 2019

Mehwis Hayat expressed her delight over being selected to head the awareness campaign on the issue at every forum possible. Adding that the issue is close to her heart and she will support the Human Rights Ministry of Pakistan in achieving their goals in this realm.

Delighted 2be appointed by the Ministry of Human Rights as Goodwill Ambassador 4 the rights of the girl child. This is something close to me & I look forward to actively raising awareness of the issues to be addressed. Lets give girls the better future they deserve @mohrpakistan pic.twitter.com/8mfApONGEW— Mehwish Hayat TI (@MehwishHayat) October 10, 2019

Speaking on the occasion, Mehwish Hayat raised the plight faced by Kashmiri women and children in the Indian-held Kashmir. Adding that “We are with them. We need the world to stand with them, to put an end to what amounts to nothing short of war crimes.”

She asserted that when given equal opportunities, girls can accomplish anything they set their minds on. “We have seen girls from the remotest corners of Pakistan becoming teachers, doctors, sportswomen, musicians, and mountaineers,” she said.

Minister Shireen Mazari also addressed the launching ceremony of an advocacy campaign. She asserted that the constitution of Pakistan encompasses equal rights for girls, seeks to empower her by ensuring her access to free education under the provision of Article 25-A, which vouched for free education to girls aged between 5-16 years. Adding that, “The rights of all children, including the girl child, are enshrined in our Constitution.”

Men & boys can be critical contributors to the empowerment of women & girls. Kudos to the truck owners & artists for spreading these messages of education & empowerment. #InternationalDayoftheGirlChild @mohrpakistan @SamarMinallahKh pic.twitter.com/kNXRLrPymX

The trucks for girls' rights are ready to get going on the roads and highways of Pakistan with the help of my wonderful team of artists and truck owners #TrucksForGirlsRights #InternationalGirlChildDay #movingbillboards pic.twitter.com/g2V6ZkWK66— Samar MinAllah Khan (@SamarMinallahKh) October 11, 2019

Ambassador of the European Union to Pakistan Androulla Kaminara also stressed the significance of providing equal education and employment opportunities, attributing the social and economic progress to greater participation of women in the society.

“I am convinced that when girls get the opportunities they deserve, the magic starts to happen. They flourish, poverty goes down, economies grow, families get stronger and healthier. So, my message to all girls today is to never give up on your dream not only for yourself but because the world would be a better place because of it” said Ambassador Kaminara.

She also lauded the active participation of Pakistani women in every sphere of life, especially their role as influencers for propagating the messages on women and girl child rights.

Meanwhile, initially, nearly 20 trucks are painted with different messages on girl child right part of appreciable ‘Truck Art Campaign’. These trucks moving to the farthest parts of Pakistan will peddle the messages for girl child rights.

#InternationalDayoftheGirlChild MOHR together with Samar Minallah and the EU launched its Girl Child Awareness programme through Truck Art. Was wonderful to meet the truck owners who gave their trucks & the artists who painted them. Can't wait to see them on the road. pic.twitter.com/flOO0KfZFp

Speaking on the occasion, activist and filmmaker Samar Minallah said: “It is important to challenge the patriarchal mindset and stereotypes. Truck art with empowering messages on rights of girls will help in reaching out to people that matter and are unreachable.”

Meanwhile, Mehwish Hayat is a renowned celebrity who has earned plaudits previously for vociferously speaking on various issues of human rights injustices, including the atrocities in Indian-Occupied Kashmir and calling out Bollywood for vilifying Pakistan as terrorists in movies. She even decried the war-mongering celebrities like Priyanka Chopra for advocating war over peace at international platforms. Hayat has beefed up social work ever since she has received Tamgha-e-Imtiaz.

Kylie Jenner Is Obtaining In excess of Travis Scott in the Ideal Way Feasible – Showbiz Cheat...

GNN under fire for mocking victims of domestic abuse