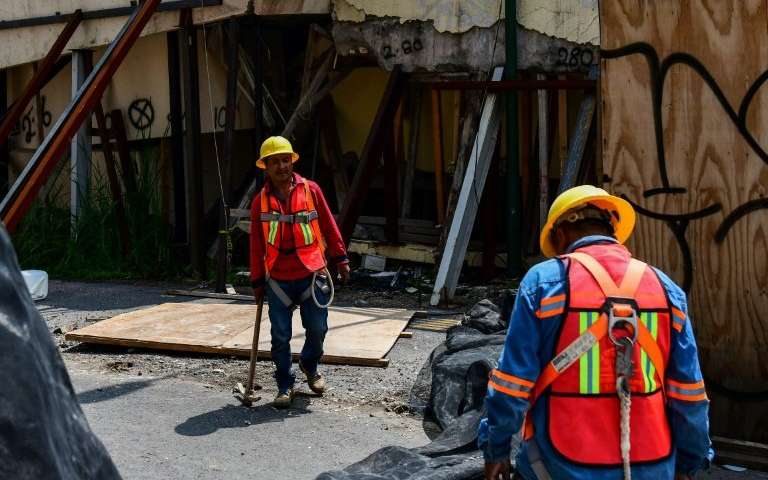 Mexico marks the anniversaries Wednesday of two deadly earthquakes: one that devastated the country last year, claiming 369 lives, and another that killed more than 10,000 people on the same date in 1985. A year ago, residents of Mexico City had just finished the earthquake drill they hold every September 19 a ritual in memory of 1985 when, some two hours later, the ground started shaking violently.

The sprawling capital of more than 20 million people was soon reliving its 32-year-old trauma: buildings collapsed into tangled piles of concrete and steel, as frantic volunteers tried to dig through the wreckage to reach those trapped inside. “It’s the same nightmare as 1985,” one sobbing resident, Georgina Sanchez, told AFP in the minutes after the quake.

One year later, the scars left by the 7.1-magnitude earthquake are barely visible in this vibrant and cosmopolitan capital. But if you know where to look, they are there. For example, at the Tlalpan housing project, on the south side of the city, some 100 people still live in an improvised camp beside what used to be building 1C.

The organization Mexicans Against Corruption and Impunity analyzed 28 buildings and found overwhelming evidence that as in 1985 corruption by construction companies and the authorities meant to regulate them was responsible for the collapses.

They were left homeless by its collapse, which killed nine people. Even more have died in the precarious conditions at the camp, according to Hector Toledo, one of the community’s leaders. “Seventeen of our neighbors have died so far this year,” Toledo, 40, told AFP. “They were sick and kept getting worse… Some of them asked to go back to their apartments to die, even though they were uninhabitable.”

A 15-minute drive from there, the authorities recently began clearing the rubble of the Rebsamen elementary school, where 19 children and seven adults were killed. In the trendy Roma-Condesa neighborhood, there is nothing but empty space where a large office building crumpled into a mountain of debris, killing 49 people. Rebuilding has been slower in the swathe of central states that were also affected by the quake, whose epicenter was about 120 kilometers (75 miles) southeast of Mexico City.

It has been slower still in the poor southern states of Oaxaca and Chiapas, which were hit hard by another, unrelated earthquake on September 7, 2017, that claimed 99 lives. The trio of anniversaries has made September an uneasy reminder that Mexico is one of the most seismically active places on Earth.

The question is whether Mexico’s leaders have learned the lessons of the quakes. According to many structural engineers, researchers, and activists, they have not. The 1985 earthquake, which measured 8.1 in magnitude and left the capital a post-apocalyptic disaster zone, was supposed to mark “a before and after” in Mexican history, says the writer and journalist Hector de Mauleon.

In the aftermath, Mexico City overhauled its building code and required every construction project to have an independent engineer to make sure the structure was sound. Many political analysts say that quake stoked outrage that drove the country’s transition from a one-party state to a nascent democracy over the next 15 years. But despite all the changes since 1985, 38 buildings still collapsed in the capital last year.

“Justice has not been done in any of the cases where a building collapsed and people died,” said Thelma Gomez, of Mexicans Against Corruption.

“It’s outrageous that every time there’s an earthquake in Mexico City, it seems like the first time,” De Mauleon said. The organization Mexicans Against Corruption and Impunity analyzed 28 buildings and found overwhelming evidence that as in 1985 corruption by construction companies and the authorities meant to regulate them was responsible for the collapses. “Earthquakes don’t kill people. Corruption does,” said Salvador Camarena, research director at the organization.

Nobody Paying the Price

The problem is compounded by the fact that no one has gone to jail for the crimes that caused the collapses: developers violating the building code; owners illegally adding extra stories, heliports or cell phone towers atop their buildings; authorities turning a blind eye. In fact, the only engineer hit with an arrest warrant over a 1985 building collapse, Max Tenenbaum, not only dodged jail but continued building.

Two more of his buildings collapsed in the 2017 quake, killing 23 people, according to Mexicans Against Corruption. But Tenenbaum is still in business repairing quake-damaged buildings sometimes getting hired to fix his own past work, the organization found. Meanwhile, Claudia Sheinbaum, the official in charge of the district that allowed the Rebsamen elementary school to build irregular additions including a penthouse apartment for the private school’s owner was elected Mexico City mayor in the country’s July 1 elections.

She is a close ally of leftist President-elect Andres Manuel Lopez Obrador, who won with a promise to stamp out corruption. If he is serious, he needs to start with ending impunity, activists say. “Justice has not been done in any of the cases where a building collapsed and people died,” said Thelma Gomez, of Mexicans Against Corruption.

Kot Momin incident: Do rules apply only on the weak?