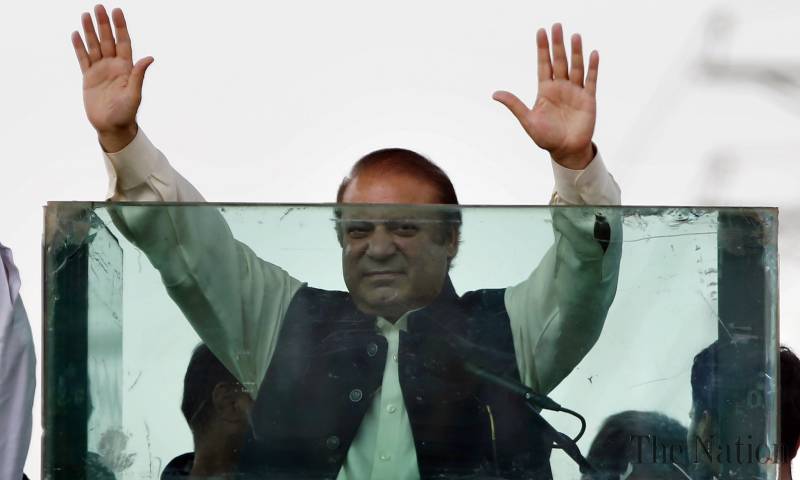 After three decades of retrogressive, status-quo politics, Mian Muhammed Nawaz Sharif, the deposed Prime Minister (PM) has decided to launch a revolution. As an activist, I have always welcomed all initiatives for change as they are direly needed.

Having been born in the 20th century, we lived through several revolutions; Lenin’s Bolshevik revolution, Mao’s Chinese Revolution and Khomeni’s Iranian Revolution being the significant ones. Due to the activism of my generation, Pakistan went through several upheavals as well. Toppling four ‘Khaki’ dictators will always be remembered as a hallmark of the struggle of my generation.

In the parliamentary democracy, the parliament has to be supreme. All the above can be achieved expeditiously with Mian Sahib’s support – no revolution is needed

Mian, a political embryo of GHQ has been the PM three times while his younger brother has been in control of Punjab for an equal number of times – they have now experienced an awakening. Suddenly, ideology has become important for them. From making money, they are now talking about a change of the system (nizam ki tabdeeli).

Their revolution includes speedy justice for all (insaf), low-cost housing for the poor, economic opportunities for the downtrodden segments of society, affordable energy, and internal security etc. As the leader of the party in power, Mian Sahib is well positioned to expeditiously implement his agenda of change. All he needs is a ‘Revolution Coordination Cell’ to launch his movement.

Read more: Pakistan’s Tragedy: From Rule of Ballot to Rule of Thana!

If Mian Sahib is serious about change, he can start with the depoliticisation of the police force – the bedrock of his party’s manipulative power. The ‘thana’ and ‘patwarkhana’ needs to be liberated from the clutches of Mian Sahib’s parliamentarians and brought under professional leadership. Political appointees in the education and health sector have to be either withdrawn or trained to deliver services, not votes for his party.

There are some basics that are required for the transition to real democracy and freedom. For people’s power to manifest, an honest ballot is an essential requirement

Appointments of all loyalists against the principles of meritocracy, starting from the Securities & Exchange Commission of Pakistan (SECP), all the way down to the secretaries and their deputies have to be reviewed.

In 1967, when Zulfiqar Ali Bhutto (ZAB) revolted against his mentor Ayub Khan and launched his party of change, he talked about ‘roti, kapra aur makan’. In 1996, when Kaptaan formed his tehrik, he offered ‘insaf’ and the creation of a welfare state. Farooq Leghari, in the same year, announced his Millat Party which demanded accountability. By contrast, Mian Sahib launched himself as a crusader to complete the unfinished agenda of his leader Zia-ul-Haq.

For years, he led the ceremony on the death anniversary of the dictator. When his dismissed government was restored by the Dr. Nasim Hassan Shah-led Supreme Court, he went straight to Zia’s mausoleum to lay a floral wreath. Till today, the usurper’s son remains a political ally of Mian Sahib. Despite a very dismal track record, Mian’s desire to start a revolution should be considered to gauge his honesty of purpose.

After seventy years of existence, Pakistan has been caught in two extremes. There are no real national institutions to serve and build the nation. On the one hand are colonial and professional outfits like the armed forces and on the other, the (virtually) private organizations like Punjab Police. For nation building, national institutions are required. We can learn from the experience of other nations.

Transition to freedom has never been easy. People’s Liberation Army (PLA) formed by Chairman Mao struggled for 22 years before it defeated the nationalists in 1949 to create the Peoples Republic of China (PRC). In the war of independence of USA, a rag tag army led by George Washington forced the British forces to surrender in 1781.

Both liberated countries started afresh, making a clean break with their past. The USA emerged as a super power in the mid-twentieth century while China is emerging to take over. After two terms in office (4+4), Washington retired and went home, setting a tradition that has been followed till today with minor exceptions.

Read more: Pakistan: Can only the Army provide freedom?

On the one hand are colonial and professional outfits like the armed forces and on the other, the private organizations like Punjab Police. For nation building, national institutions are required

Chairman Senate Raza Rabbani has suggested a dialogue which is not a bad idea. Perhaps it may prove to be an alternative to revolution as proposed by Mian Sahib. There are some basics that are required for the transition to real democracy and freedom. For people’s power to manifest, an honest ballot is an essential requirement. With ten manipulated elections since 1977, our track record is very poor. Ballot tampering has to be eliminated.

In the original 1973 Constitution, there was a two-term clause for the PM which needs to be restored. Colonial institutions and legacies have to be replaced with national priorities. For a transition to freedom, the Constitution is a sacred document which must be respected by all institutions and individuals.

Only bonafide amendments should be allowed after due process. In the parliamentary democracy, the parliament has to be supreme. All the above can be achieved expeditiously with Mian Sahib’s support – no revolution is needed. A joint session of the parliament can initiate the process if he is serious in bringing the much-needed change.

Pakistan YouTuber reconnects woman with family in India after 70 years

Making a success story out of CPEC: Certain, probable, or doubtful?