Middle East: Love and weddings in the Shadow of War

Armed conflicts devastate the Middle East with death and misery all around, but occasionally love comes out victorious. Love and wedding in the shadow of war narrates the story of an Iraqi couple who got married happily in the war-torn region. 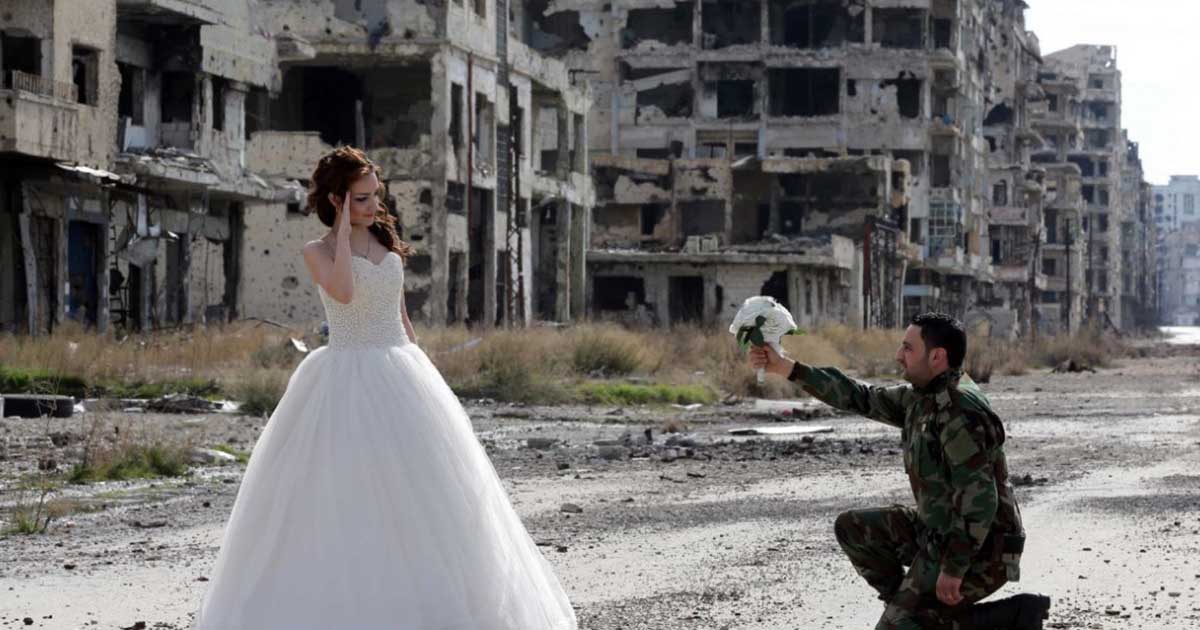 “Love, we have no aim but to be defeated in your wars,” wrote the Palestinian poet Mahmud Darwish. Despite the armed conflicts devastating the Middle East, occasionally love comes out victorious.

From the battlefields of Syria to the ruined cities of Yemen, journalists bear witness to violence and destruction every day – but sometimes they capture glimmers of hope, beauty and even romance.

To mark Valentine’s Day, AFP has selected some of its most powerful recent images of love.

At a house in Syria's Raqqa, women and men danced together in celebration at a wedding that would have been unimaginable just months ago, when the Islamic State group ruled the city.

AFP photographer Safin Hamed recalls accompanying a young couple from Iraq’s Yazidi minority from their tent in a squalid refugee camp to their December wedding at a modest hall in nearby Dohuk city.

“It was a basic party, there wasn’t a meal, just cake,” he said.

“But they really wanted to express their happiness and to dance.”

The young bride and groom were just children when the Islamic State group stormed through their rugged home region of Sinjar in 2014, kidnapping thousands of women and girls as “sex slaves”, killing men en masse and taking boys as soldiers.

But even after six years living on humanitarian aid in a refugee camp, the couple “loved life and wanted to keep going… despite everything that had happened to them,” Hamed said.

“Even when the music finished, they wanted the band to play on,” Hamed said.

“Despite their suffering, they were looking after themselves, getting their hair done in a salon, wearing nice clothes.”

Weddings in the shadow of war, whether in squalid refugee camps or bombed-out towns, can be defiant celebrations of life and expressions of hope for a better future.

In Yemen’s rebel-held capital of Sanaa, Mohammed Huwais photographed men dancing in the streets to celebrate a marriage in the shadow of a war that has created what the United Nations calls the world’s worst humanitarian crisis.

Read more: Why is the Middle East Such a Complicated Region to Study?

In Syria’s war-torn northwestern province of Idlib, AFP photojournalist Aaref Watad captured chilling images of a wedding dress in the blown-out facade of a bridal shop, on December 8, 2019, the day after a reported Russian airstrike on a market in the village.

And in the country’s northeast, Mustafa Ramadan and Luvin Yusuf had to postpone their wedding as Turkey and its rebel proxies launched an offensive against Kurdish forces they view as “terrorists”.

When they finally married in the city of Qamishli, the wedding hall was filled with Kurdish patriotic songs, clapping, singing and laughing, said AFP photographer Delil Souleiman.

“It was so different from working amid bombardment, displacement and death,” he said.

“It was full of music, colours, happiness and dancing.”

Who poisoned the Russian spy?