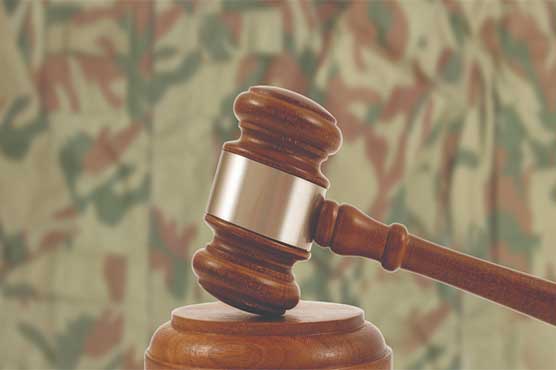 During an interview to a private TV channel, DG ISPR Major General Ghafoor clarified that the military courts were not a requirement for the Army, but in fact, they were the “need of the nation” following the attack on the Army Public School in Peshawar. DG ISPR went onto say that the decision to extend military courts was adopted after a consensus of the parliamentary representatives, and the army will “do what the parliament tells us”.

Shahid Khaqan Abbasi, a senior PML-N leader while talking to the media on Sunday said that there was no need of such [military] courts anymore.

Major General Ghafoor further clarified that military courts were the “need of the hour” as the criminal justice system of Pakistan is direly in need of reformation in order to make it an effective tool of accountability. He strongly negated the criticism that military courts denied the basic human right of a fair trial. He said, “The accused were provided a fair opportunity to put forward their narratives and all legalities were duly performed.”

Military courts were established in January 2015, a constitutional amendment was passed under the National Action Plan (NAP) to undermine terrorists, accompanied with a sunset clause, devised to last for two years. In January 2017, the former government led by PML-N further extended the courts for another two years.

Given the current tumultuous political environment, the PTI-led federal government is faced with the uphill challenge of extending the military courts with a constitutional amendment. In December, PPP Chairperson Bilawal Bhutto-Zardari had made it crystal clear that PPP will not be supportive of giving the military courts another extension.

The environment of political confrontation and antagonism between the government and the opposition has created a quagmire on the issue of extending military courts.

It was expected that PML-N would favor the grant of extension to military courts as it was PML-N who introduced the courts at first place. Not just that, Shahbaz Sharif, the opposition leader also hinted so as he said the party would consider the matter had the PTI-led government approached them.

But after the opposition from PPP, PML-N too has decided to oppose the extension. Shahid Khaqan Abbasi, a senior PML-N leader while talking to the media on Sunday said that there was no need of such [military] courts anymore.

In the same pretext, Asif Ali Zardari has repeatedly negated the need for military courts, and both PPP leaders and a senior PML-N leader Rana Sanaullah lauded the statement made by the newly appointed chief justice that claims to transfer the responsibilities of the military courts to the civil courts.

During the full court reference for CJP Nisar, Justice Khosa commented on the extension of military courts by reinstating that the judgments made by military courts are deemed “wrong” across the world. He accepted the fact that military courts ensure speedy dispensation of verdicts, however, he said, “Civilian courts should try to resolve cases in a short period of time.”

The environment of political confrontation and antagonism between the government and the opposition has created a quagmire on the issue of extending military courts. PM Imran Khan has established a two-member committee, compromising of Foreign Minister Shah Mahmood Qureshi and Defense Minister Pervaiz Khattak, to consult the opposition on reaching a consensus.

Both PMLN and PPP are expected to use the extension of military courts as a tool to secure concessions from the PTI-led federal government and military establishment.

Political analysts have deduced that this opposition is fuelled by the recent surge of investigating fake bank accounts across Sindh that has triggered serious corruption allegation on PPP co-chairperson, Asif Ali Zardari, and his sister, Faryal Talpur.  As opposed to validating the effectiveness of the military courts in driving down terrorism, they appear to be criticizing its impact on the democratic and human rights dynamics of the country.

Analysts have concluded that by portraying the extension of military courts as a human rights crisis and a threat to the democratic health of the country, PPP appears to be driving away attention from the ongoing JIT investigations. Both PMLN and PPP are expected to use the extension of military courts as a tool to secure concessions from the PTI-led federal government and military establishment.

Read more: Pakistan: Will military courts get an extension?

While PLMN and PPP appear to be united in using the issue of extending the military courts as a pretext to create political antagonism and undermine the ongoing corruption investigations, DG ISPR Major General Ghafoor has left us to contemplate a very difficult question, “whether the civilian courts are strong enough to effectively deal with the menace of terrorism”.

Political analysts have commented that the gravest consequence of the ongoing political scuffle is the fact that it is sending a message to all insurgent and terrorist groups across Pakistan that the parliamentary resolve against terrorism is now weakening.