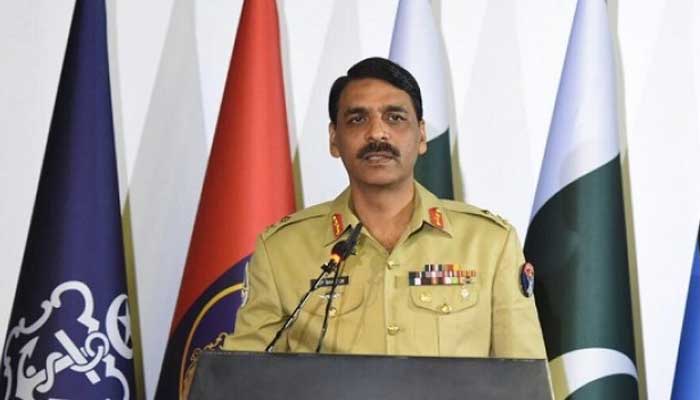 Addressing a news conference in Rawalpindi, DG ISPR being a fourth pillar of the state, it was the media’s responsibility to act proactively to counter fifth generation and hybrid war. He acknowledged that media turned around the situation in Zarb-e-Azb and Radd-ul-Fasaad.

Talking about the war on terror been fought in Khyber Pakhtunkhwa, He said in the tribal belt which was 3 percent of the country’s geography over 200,000 troops had been deployed.

Speaking on the surrender of Ferraris [a term used for Baloch separatists] in the province, the DG ISPR informed reporters that over 2,200 had done so in the last three years. “This is a good step and it is my request to those [Ferraris] in the mountains who want to destabilize the country on the directives of those sitting abroad to join the national mainstream and play their role in the prosperity of Pakistan and Baluchistan.”

The number of polio cases in the country has also decreased, and the day would come when Pakistan would be polio-free, DG ISPR said. Appreciating the efforts of Sindh Rangers, DG ISPR said that law and order situation in Karachi had been improved, as only two terror incidents were recorded in 2018. Talking about the war on terror been fought in Khyber Pakhtunkhwa, He said in the tribal belt which was 3 percent of the country’s geography over 200,000 troops had been deployed.

Read more: DG ISPR’s Press Conference: message for the nation, a warning ‘for…

Briefing reporters on Operation Radd-ul-Fasaad which was nearing two years, the military spokesman said till now 44 major operations had taken place across the country and 42,000 IBOs and combing operations.

“Our aim of de-weaponizing has not yet progressed as we hoped. We are working with the government through legislation and licensing process to improve this. Till now, nearly 32,000 weapons and 4.34 million types of ammunition have been recovered from across the country.”

Responding to a recent statement by the Indian army chief in which he said talks could not be held until Pakistan became a secular state, DG ISPR said: “We are a Muslim state. They [India] do not need to tell us what kind of country we should be. Are they secular? Look what is happening to the 200 million Muslims there.

We have opened Kartarpur in respect for another religion. We provide security to temples and churches in Pakistan. What happened at the Babri Masjid there? I think he [Indian Army chief] needs to look inward to become secular first and tolerate us the way we are.”

Warns PTM not to Cross the Line

Speaking at the press conference, Major General Asif Ghafoor warned the Pashtun Tahafuz Movement (PTM) not to cross the line. Mr. Ghafoor said that the PTM had started out with three demands which were a reduction in check posts, clearance of mines and missing persons.

About reduction in check posts, He said, “In 2016 there were 469 check posts in KP and Fata, as we speak today there are 331. We will not keep a single check post if we feel the security situation does not require it.”

Referring to the second demand of the PTM, the military spokesman said there were 43 teams of engineers in KP and Fata who were working to clear mines. “These teams till now have cleared near 44 percent of the area. It is important to remember that a war has taken place in this area. Several of our troops have also suffered casualties due to these mines and unexploded bombs. A casualty whether of a civilian or soldier is of a Pakistani and one day we will clear this area of the explosives and mines.”

On the third demand, DG ISPR said that the cases of missing persons were being resolved too.“In 2011 there was a commission formed on enforced disappearances which at that time was headed by Justice Fazal now it is headed by Justice Javed. On one hand, the cases were ongoing in this commission and simultaneously some complaints would go to the court.

Pakhtun Tahafuz Movement [PTM] had emerged after the killing of Naqeebullah Mehsud and later transformed into a countrywide movement for Pashtuns rights.

This way work was being done in two places. Lately, the Supreme Court gave the order to do this through the commission. Of these 7,000 cases over 4,000 cases had been resolved. At this time 3,000 plus cases are under process, 2,000 cases of which are with the commission,” he added.

Responding to the question that why PTM wasn’t dealt with strict hand for chanting slogans that were insulting to soldiers or the families of martyrs, DG ISPR said,” We engaged with them [PTM] politely. These Pakistani brothers or ours are from a region which has seen a lot of war.

The military spokesperson went on to say, “Their [PTM’s] genuine demands are being dealt with by the government and Pakistan Army even before they made them. But the direction they are heading in now, it can reach a stage where they will cross that line where we will have to use our authority. They should not cross those lines where the state has to use its force to control the situation and the same will happen to them which happen when the state establishes its writ.”

Pakhtun Tahafuz Movement [PTM] had emerged after the killing of Naqeebullah Mehsud and later transformed into a countrywide movement for Pashtuns rights.

Military-media wing has been engaged recently with media personnel to keep them involved in the efforts to boost the positive image of Pakistan in the national and international community.

He added that despite the measures in place if rules were violated punishment was given. “In 2017-18 almost 400 Pakistan officers have been given punishments which range from a warning to dismissals and even jail.” He also said officers faced stricter punishments than soldiers.

Major General Asif Ghafoor on Tuesday, Dec 4, had also interacted with a group of Pakistan based foreign media journalists to brief them about the security situation and ongoing stability operations and had urged them to play a role in reflecting the positive image of the country.

Earlier, on Nov 20, in a meeting of GD ISPR and Chairman PEMRA Muhammad Saleem Baig, both had discussed measures to facilitate Pakistani media in projecting positive image and narrative of Pakistan while effectively countering anti-Pakistan narrative at play through certain foreign media / inimical forces.

The new era, new technology, and new form of war; fifth generation warfare can only be fought with media being fully prepared for that. Military-media wing has been engaged recently with media personnel to keep them involved in the efforts to boost the positive image of Pakistan in the national and international community.