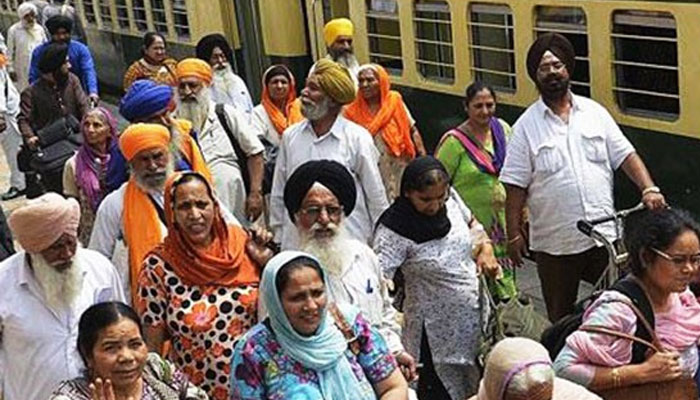 A 24-year-old Indian man, who had gone missing in Pakistan during Baisakhi festival celebrations, was found from his “Facebook friend’s” residence in Sheikhupura, about 50 kilometers from Lahore, an official of the Evacuee Trust Property Board said on Monday. Amarjit Singh, a resident of Amritsar, had arrived in Pakistan along with other 1,700 Sikh pilgrims to celebrate Baisakhi festival on April 12. But his disappearance was only noticed when the entourage, he came along with, embarked upon the return journey to India.

Confirming that Mr. Singh had been traced, spokesperson of the Evacuee Trust Property Board or ETPB Amir Hashmi said that he will be handed over to the Indian authorities today. “Amarjit Singh has been found and will be sent back to India tomorrow. Singh on his arrival to Nankana Sahib had left the group to meet his Facebook friend – Amir Razzak – in Sheikhupura (some 30km from Nankana Sahib).

“In fact the family of Razzak contacted the board and told it about his (Singh) stay at his residence. Today, both Singh and Razzak visited the ETPB office in Lahore and told it that he (Singh) had not gone missing,” Mr Hashmi said. He said, Mr. Singh told the board that he thought that he had a one month visa and he would return the country after spending a couple of week with his friend here.

The ETPB takes passports from the visiting pilgrims and returns them on their departure to their homeland. “After it was established that he had not deliberately disappeared and had no links with the Indian intelligence agency, Singh was handed over to the ETPB to be deported to India,” he said. According to the investigation by the ETPB, Mr. Singh separated himself on April 16 from the visiting Sikh group members on a visit to Gurdwara Janamestan in Nankana Sahib (some 80km from Lahore).

Earlier the Indian government had tried to generate controversy around the Sikh pilgrimage by claiming Islamabad was fanning the flames of Sikh independence through indoctrinating visiting Indian Sikhs with Khalistani material.

The ETB came to know about his disappearance when Mr. Singh did not turn up on April 21 along with other visiting Indian Sikhs at the Wagah railway station to leave for India. Mr. Singh and others had a valid Pakistani visa till April 21. Mr Singh’s disappearance came at the heels of another visiting Indian pilgrim Kiran Bala, who married a Pakistani man Mohammad Azam, a resident of Lahore, and applied for Pakistani citizenship.

An Indian Sikh woman, who went to Pakistan to attend the Baisakhi festival, has sought the extension of her visa after marrying a man in Lahore and embracing Islam, media reports said on Thursday. Kiran Bala, daughter of Manohar Lal from Punjab’s Hoshiarpur district, wrote to the Pakistan Foreign Office that her visa should be extended as she married one Mohammad Azam, a resident of Lahore, during a ceremony held at Jamia Naeemia seminary in Lahore on April 16.

She also changed her name to Amna Bibi which she used to sign the letter addressed to the foreign ministry, the report said. “Now in the given circumstances, the undersigned could not return back to India and the undersigned have received life threats of assassination, therefore, the undersigned intends to extend her visa,” she wrote in the letter, published by the local media. The Lahore High Court on Friday directed the Ministry of Foreign Affairs to decide the application of Aamna Bibi seeking Pakistani nationality and visa extension which she submitted after embracing Islam and marrying.

The recent Sikh pilgrimage has become a problematic subject mainly due to Indian claims. Aamna Bibi’s case was distorted by Indian media as a case of kidnapping until she had to come herself to clear the falsehood. Now Indian Medias are claiming without proof that Amarjit Singh was questioned by Pakistani intelligence agencies before being handed over.

Earlier the Indian government had tried to generate controversy around the Sikh pilgrimage by claiming Islamabad was fanning the flames of Sikh independence through indoctrinating visiting Indian Sikhs with Khalistani material. It is ironic for the Government of India to accuse Pakistan of violating the 1974 Protocol on Visits to Religious Shrines, whereas it is India that has, in clear violation of the Protocol, twice within this year denied visas to Pakistani pilgrims on occasions of Urs of Hazrat Nizamuddin Auliya (R.A.) and Khwaja Moinuddin Chishti Ajmeri (R.A.) and scuttled at least three visits of Sikh and Hindu pilgrims to Religious Shrines in Pakistan since June 2017.