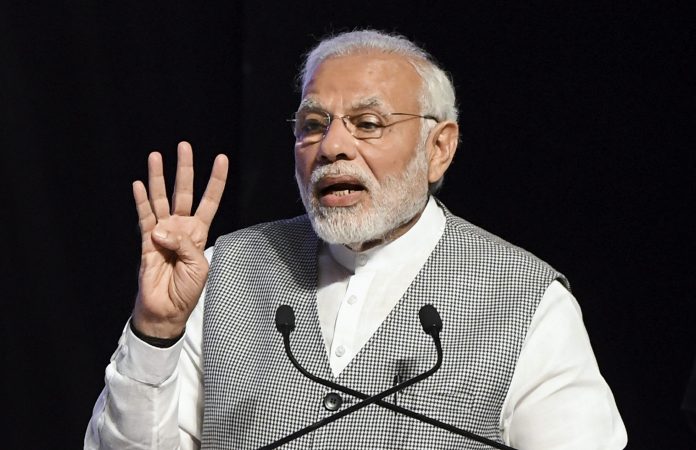 Indian Prime Minister, Narendra Modi rebuked Pakistan again as he asked it to stay away from terror activities and focus on improving relations with its neighbors. He was giving the inauguration speech at the Raisina Dialogue being held in New Delhi, India.

PM @narendramodi on relations with Pakistan:

India alone cannot walk the path of peace.
It also has to be Pakistan’s journey to make. pic.twitter.com/hWNw2612Gr

Prime Minister Modi said, “My vision for our neighborhood puts premium on peaceful and harmonious ties with entire South Asia. That vision had led me to invite leaders of all SAARC nations, including Pakistan, for my swearing-in. For this vision, I had also traveled to Lahore. But, India alone cannot walk the path of peace. It also has to be Pakistan’s journey to make. Pakistan must walk away from terror if it wants to walk towards dialogue with India.”

But, India alone cannot walk the path of peace. It also has to be Pakistan’s journey to make.

He was speaking at the inauguration of the second Raisina dialogue, where representatives from over 69 countries were participating.  India launched the Raisina dialogue last year, as a conference to discuss the country’s strategic issues. It is organized by the Ministry of External Affairs and the Observer Research Foundation, an Indian think tank. The focus of this year’s meeting is new challenges in multi-polarity and cyber security.

Prime Minister Modi, did not acknowledge the effort towards peace that displayed by Pakistan’s Prime Minister Nawaz Sharif attending his inauguration in 2014, against all domestic opposition – political and military. It was by all means, an attempt by Pakistan to promote good relations with India.

In fact, the impromptu visit of Prime Minister Narendra Modi to Pakistan, in December 2015, which he referred to, was a visit which no one in the Pakistani army or foreign office was aware off till his arrival. He stopped off in Lahore after a visit to Afghanistan.

For Mr Modi to declare he is truly keen on improving relations with Pakistan, he should have walked the road to Islamabad as Prime Minister Nawaz Sharif did to Delhi. The SAARC meeting being held in November 2015 provided the Indian leadership the opportune moment if they were serious about their intentions of peace and a thriving and well-connected neighborhood.

read more: Why Modi needs to wake up? Advice from a Pakistani

Mr Modi went on to threaten Pakistan once again with Isolation and said, “Our strong belief in delinking terrorism from religion and rejecting artificial distinctions between good and bad terrorism, are now a global talking point. And, those in our neighborhood who support violence, perpetrate hatred, and export terror stand isolated and ignored,” he said.

Since last year, when Prime Minister Modi, refused to attend the SAARC conference being held in Pakistan, he has been talking about isolating Pakistan. He has used all occasions to try and get the world community to declare Pakistan a ‘pariah’ state, including at the BRICS conference held at GOA last year. So far his strategy has not been successful, if anything Pakistan found out it had many silent friends that came out in its support, including the OIC, Turkey, China. Unexpectedly, even Russia did not side with India, as was expected by Indians and Pakistanis.

both our countries need to show sensitivity and respect for each other’s core concerns and interests.

He glossed over on differences with China saying they had a strong trade relationship and differences between neighbors were due to happen but they needed to show sensitivity and respect for each other’s core concerns.

“At the same time, it is not unnatural for two large neighboring powers to have some differences. In the management of our relationship, and for peace and progress in the region, both our countries need to show sensitivity and respect for each other’s core concerns and interests.”

PM Modi talked of this century being that of ‘rising Asia’ and that this Asia was a multi-polar Asia.  He talked of accepting “that voices of many, not views of a few should shape the global agenda. Therefore, we need to guard against any instinct or inclination that promotes exclusion, especially in Asia,”

Yet all India’s actions to date belie this talk. Rising Asia seems predicated on Rising India and Rising China – neither of whom are wanting to accommodate their neighboring countries in this rise except so far as it enhances further their own hegemony.

Steady India outclassed a frail side again: Where did Pakistan go wrong?