Modi, Trump, Netanyahu: A new world order guided by might is right

These leaders think in terms of might is right rather than adherence to international law. They envision civilisational states that define themselves and their boundaries on the basis of a specific civilization as opposed to nation states that are determined by internationally recognized borders, population and language and have little time for the rule of law. 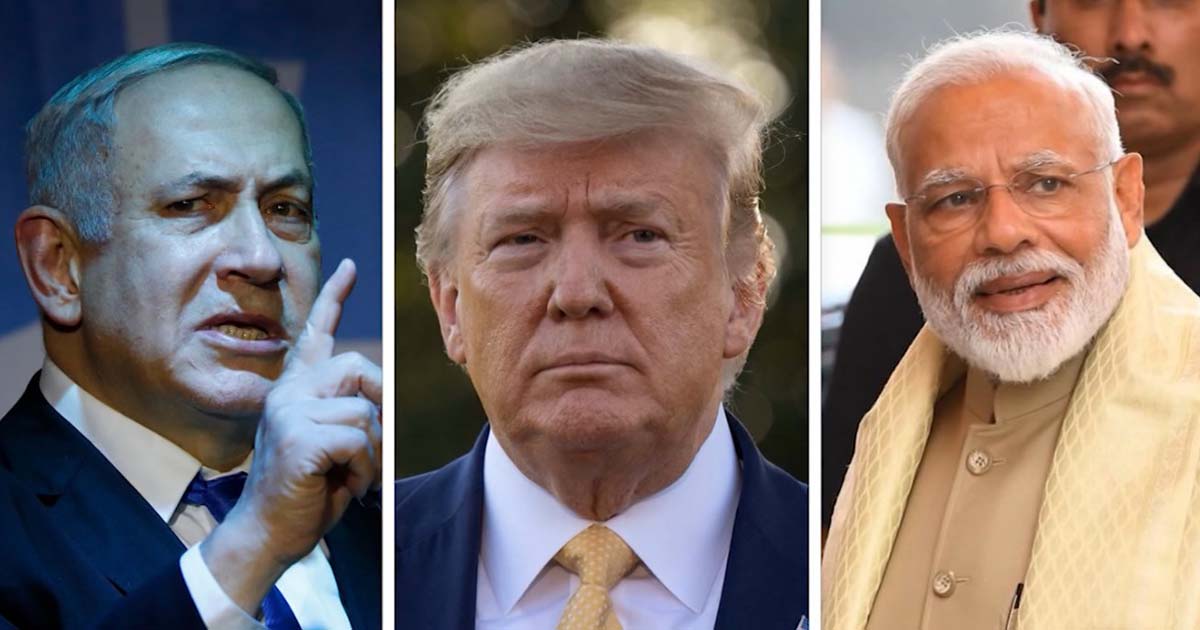 The real issue with US President Donald J. Trump’s Deal of the Century Israeli-Palestinian peace plan is not whether it stands a chance of resolving one of the world’s most intractable conflicts. It doesn’t.

More important is the fact that Israel will, in violation of international law, be empowered to unilaterally annex occupied territory and take steps towards creating an ethnically more homogenous state by transferring a significant proportion of the Jewish state’s Israeli Palestinian population to what the plan envisions as a future Palestinian entity.

If Israel indeed moves ahead with implementation of Mr. Trump’s plan, it will likely find itself at the forefront of the civilizationalist effort to shape a new world order that pays little heed to human and minority rights

Mr. Trump, by endorsing annexation and populations transfers that violate the Fourth Geneva Convention, has put Israel at the cutting edge of an emerging new world order dominated by civilizationalist leaders.

These leaders think in terms of might is right rather than adherence to international law. They envision civilisational states that define themselves and their boundaries on the basis of a specific civilization as opposed to nation states that are determined by internationally recognized borders, population and language and have little time for the rule of law.

In doing so Mr. Trump, like many other likeminded civilizationalist leaders, including India’s Narendra Modi, China’s Xi Jinping and Myanmar’s Win Myint who pursue discriminatory policies that marginalize and disenfranchise minorities and undermine social cohesion, is contributing to a world in which mass migration, radicalization and increased political violence will likely pose threats on a far larger scale than they do today.

If Israel indeed moves ahead with implementation of Mr. Trump’s plan, it will likely find itself at the forefront of the civilizationalist effort to shape a new world order that pays little heed to human and minority rights anchored in international law and that rejects agreements on the status of occupied land and people that were forged in the wake of the 20th century’s devastating world wars.

Becoming a flashpoint in the struggle for the shape of a new world could prove to be for Israel more of a curse than a blessing.

It could turn Israel into yet another but nonetheless prime example of what civilizationalist politics is likely to produce: an illiberal if not authoritarian state whose policies are at best controversial rather than, as Israel likes to see itself, the Middle East’s shining and only real democracy,

Responding to Mr. Trump’s plan, conservative Gulf states praised US efforts to achieve peace and called for negotiations but were careful not to endorse Mr. Trump’s blueprint while the Arab League that groups all Arab states outright rejected the proposal.

This did not stop Lieutenant General Abdel Fattah al-Burhan, the head of Sudan’s post-popular revolt Sovereignty Council who has close ties to Saudi Arabia and the United Arab Emirates, from meeting Mr. Netanyahu a day later in Uganda.

Read more: US accused of interference in upcoming Israeli elections

iNonetheless, few in the international community would endorse the deprival of citizenship of some 300,000 Palestinian Israelis and their transfer together with their lands in what is known as the Triangle in central Israel to a future Palestinian state.

Only 13 percent of Israeli Palestinians surveyed last year by the Israel Democracy Institute defined themselves as first and foremost being Palestinian while 38 percent said their primary identity was Arab.

Meanwhile, 65 percent said they were “proud to be Israelis.” An even larger number, 83 percent, said they strived to be full members of Israeli society.

“Peace is made with the enemy. We are residents of the state, and we are not the enemy. The prime minister (Netanyahu) wants to save his skin at the expense of inciting hatred against the Arab population,” said Shuaa Massarweh Mansour, the mayor of Taiibeh, a town of 50,000 Israeli Palestinians that was included in the plan’s suggestion for a population transfer.

Mr. Mansour was referring to last month’s indictment of Mr. Netanyahu on charges of bribery, fraud and breach of trust in three separate corruption cases.

Demonstrations on the West Bank and in the Gaza Strip in response to the Trump plan were fairly muted but that is no guarantee that implementation will not provoke wide-spread protest directed not only against Israel and the United States but also the Palestine Authority.

Those protests would likely spread to Israeli Palestinians resident within Israeli borders prior to the 1967 Middle East war in which Israel conquered the West Bank, East Jerusalem and the Golan Heights that were annexed before Mr. Trump endorsed their incorporation into Israel, and Gaza.

An Israeli crackdown on the protesters would only add to problems created by implementation of the Trump plan.

The plan appears to be designed to pre-empt what would be a worst case civilizationalist scenario in which continued Israeli occupation would force Israel to choose between being a democracy and a Jewish state because of demographics that would likely see Palestinians becoming a majority of the population.

The irony is that implementation of the plan without Palestinian consent and cooperation could produce the same dilemma.

As a result, Mr. Trump’s civilizationalist approach towards solving the Israeli-Palestinian conflict and Mr. Netanyahu’s enthusiastic embrace of the plan threatens to not only put Israel at the cutting edge of the struggle to shape a new world. It risks turning Israel into a poster child of everything that is wrong with civilisationalism.

A timeline of the motorway gang-rape