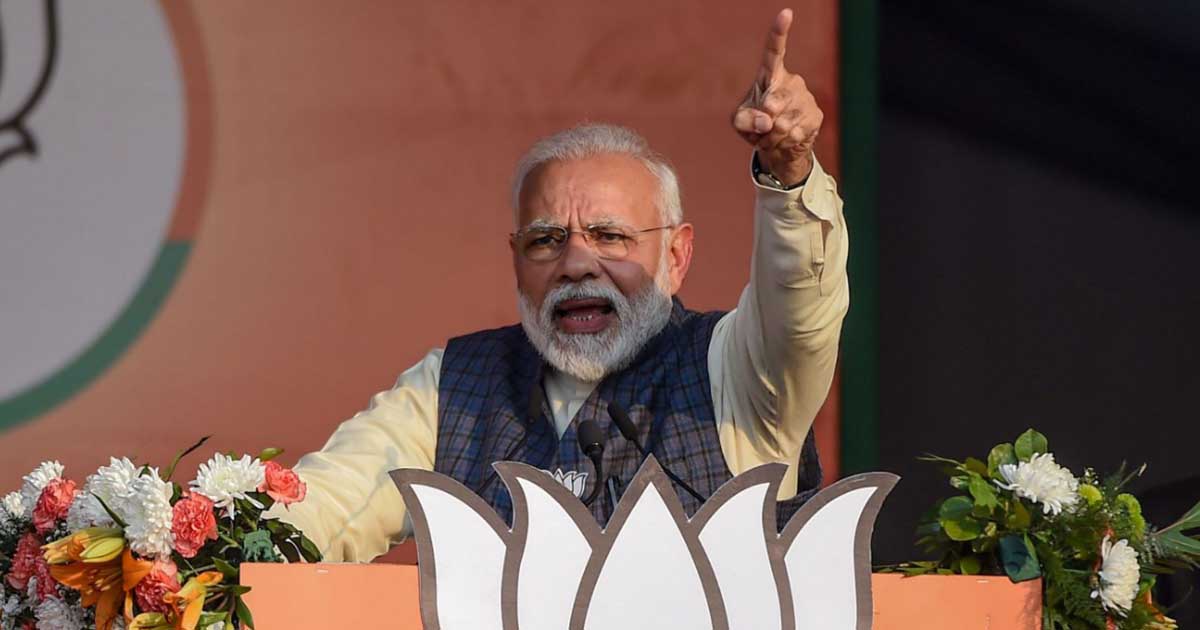 India is no more the land where the head is held high and the river of reason flows. The dreary habits of the leader and the people he leads, have made the followers adopt whatever he pronounces from his pedestal.

PM Modi makes the majority subscribe to an ideology based on hate. In such circumstances, how could democracy function? There are similarities and differences between the Trump administration and Modi’s government.

If Trump orders the piracy of masks sent by China to France, Germany and Canada; it is his personal decision. On the other hand, in the case of Modi, it is a failure of vision. Kamal Haasan says: “He let the ‘congregation of ignorant and fools’ gather in Delhi because he hates them and wants to trap them and blame them.”

Modi’s actions have opened the old caste system. The poultry farms in Pune, Nasik, Ahmednagar do not allow entry to the Muslims. Moreover, in Malegaon even the police do not allow local Muslims to enter the Hindu majority areas. Five bridges have been closed. Only Allama Iqbal bridge is open through which only the Hindus are allowed entry. This has never happened even when communal tension and riots were rampant.

Who was better informed Dr Anthony Fauci or Donald Trump when it comes to preventing coronavirus? Why could federalism in the US stop Trump from proceeding with his decisions but not Modi, in the federal union republic of India? Does the announcement from the raised platform attract people to clap, beat pots, ring bells, light lamp or show light on mobiles phones, constitute a boastful behavior?

“A man is known by the company he keeps”: Trump hobnobs with his ‘exceptional leader’ and ‘true friend’ Modi, whose party men in Delhi are often defiantly hatching conspiracies and inciting pogroms.

On one instance, it was responsible for pogroms in Delhi on February 25-26 and in another event, it involved looting tarmac from the airport.

First Trump threatened Modi of retaliation after which Modi responded with “our way of supply” of hydroxychloroquine. In the prevailing situation, the people of India are not playing any role. People believe that Modi will remain in power and will keep on serving as the chief of the Hindu rashtra in the making. It’s believed that the Hindu Rashtra will become active in 2024, according to the agenda and manifesto of the party. A similar case is: The hosannas of Hungarian and Israel PMs’.

This is the second stint of Modi as the PM, and will potentially translate to a third term. Modi’s party resembles the Arrow Cross Party of Hungary. It is also called “Hungarism.” which “was an eclectic doctrine promising jobs, revenge, freedom from foreigners, eternal salvation, and the restoration of the stolen territory.” This is a “world war-like situation” and demands decisive actions. This may not be exactly similar to Nazism as in Germany, but successive events have unveiled a promising commonality.

People who were involved in the plot to kill Hemant Karkare were crying for his blood because he had dared to arrest Hindus who were found carrying out bomb attacks. They were products of the hate ideology. And even those who carried out operation during November 25, 2008 attack on Mumbai, conceded that Ajmal Kasab was photographed sitting on a chair: “they brought it to my notice” remarked Rakesh Maria, who was in the control room, “that it was in all probability the handiwork of our own Central Intelligence agencies who had immediately dispatched their own officers to Mumbai to question Kasab.”

The sight of Ajmal Kasab appearing on television raised alarm bells. When Maria inquired by saying “Gaddar Kaaun hai?” (Who betrayed his office?), there must’ve been a lot of anger and tension inside the room. The Inspector General of Maharashtra Police SM Mushriff wrote “at the instance of the IB hinted at the involvement of an ISI-backed terrorist oufit across the border and in case of Malegaon 2006 case, while the police had been investigating it on correct lines, the IB suddenly intervened in the garb of the then Mahasrashtra ATS, KP Raghuvanshi, and declared the suspected terrorists belonged to Jaish-e-Mohammad.”

Therefore, it is the ideology which is leading the people and not the PM in power, who is a follower of the ideology. Nevertheless, his supporters still follow the man himself.

The proponents of this hate-based ideology have overwhelmed prominent figures who are at the helm of affairs. Despite the assurance of the then Prime Minister Dr Manmohan Singh that no person or organization howsoever influential would be left out of investigation and every material proof would be included in the investigation of Malegaon bomb blasts of 2006. However, the real state of investigation is far from satisfactory.

On 1st September 2006, the Nasik control room received an actionable intelligence that a terrorist attack would take place any minute. The ASP of Malegaon Mr. Kumbhare informed the SP (Rural) Mr. Rajwardhan about the imminent threat. The ASP had visited the trustees of Hamidiya mosque a day before the bomb blasts, where he apprised them of the danger.

He mentioned that police would be deployed in and around the graveyard, and beggars would not be allowed in the vicinity. However, even then no police men present when the blasts occurred, and many beggars were injured and killed within the premises of the mosque. Why were there no police men at the mosque?

It’s worth mentioning the PUNYA NAGRI Marathi paper editorial of September 11, 2006, which condemned Dr PS Pasricha for impulsively shifting the blame on Bajrang Dal for the 2006 bomb explosions in Malegaon.

The mainstream media didn’t cover this news story and the publishers of the paper are of the opinion that this saved the country from communal disturbance. Unwittingly though, the paper also reminded its readers about the incident when the DGP had held a Maharashtra political leader (Bal Thackeray?) responsible for the 7/11 serial bomb blasts.

Another fact is that the two attacks took place even when PM Singh promptly issued warnings a week before the attacks of 2006 and 2008 respectively. Both happened in September, the first on Shabebarat and the next on the holiest night of the month of Ramzan. So, it was the ideology that was playing havoc with democracy. But today on Shabebarat on April 9, 2020 the strictest shut down is enforced inside Malegaon. Even when in Malegaon not even a single case of Corona virus was found, and yet the people are locked up.

Coronavirus: One third of humanity under lockdown

Sonam Kapoor responds to backlash on her Kashmir statement

India Revoked Citizenship Of Aatish Taseer Due To Pakistani Father