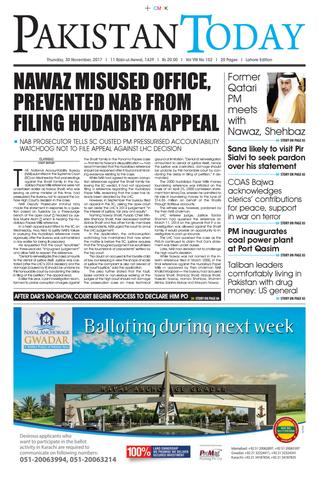 Chief Justice of Pakistan Mian Saqib Nisar has ordered the formation of a Supreme Court (SC) bench, on Friday, to hear a reference for the re-opening of the Sharif family’s Hudaibiya Paper Mills filed by NAB.

The three-judge bench will be headed by Justice Asif Saeed Khosa (who also headed the five-member Panama case bench) and will include Justice Dost Muhammad and Justice Mazhar Alam Miankhel.

The bench will begin hearings of the reference on Nov 13.

The National Accountability Bureau (NAB) had appealed to the apex court against the Lahore High Court’s 2014 decision to acquit Nawaz Sharif and several members of his family in the Hudaibiya Paper Mills case. This step has been taken in accordance with the Panama JIT’s recommendations to the Supreme Court in its momentous report.

In its appeal, the NAB has asked the apex court to set aside the 2014 judgment “in the interest of justice, fair play and equity”.

Originally, NAB’s former chairman Lt Gen Khalid Maqbool in his statement to an accountability court had said that “All accused persons in collusion and with the connivance of each other appear to have committed acts of corruption and corrupt practices as defined under Section 9 read with Section 10 of the NAB Ordinance,”

NAB, in its final reference, implicated the Sharif family in making fraudulent accounts and deposits which they used as collateral to obtain loans from various financial institutions.

“There was an unexplained investment of Rs642.743 million appearing in books of the mill as share deposit money. The same belonged to the directors/shareholders and beneficial owners of the company, which they had fraudulently amassed under the garb of foreign equity investment,” final reference stated.

It further said the company in question settled its loan with the London-based Al Towfeek Company for Investment Funds by making a payment of $8.7 million in 1999 and the source of this payment also appeared to be illicit.

“It appears from the evidence that in order to launder and conceal their ill-gotten wealth, both the Sharif brothers appeared to have fraudulently opened fictitious foreign currency accounts in the names of various individuals with the active connivance of some of their close associates and employees.”

NAB, in its final reference, implicated the Sharif family in making fraudulent accounts and deposits which they used as collateral to obtain loans from various financial institutions.

“The amounts that have been deposited in the said accounts stand unexplained and appear to be beyond the known source of income of the accused individuals,” it said.

The JIT, in its report, had recommended that the Hudaibiya Paper Mills Case should be reopened.

Now, after 17 years since the original case was filed, NAB is arguing in its appeal that the referee judge was not “competent” to set aside the findings of the high court, in which NAB had been allowed to re-initiate investigations against Sharif family members.

The accountability watchdog has said that since the Panamagate JIT – formed to probe corruption allegations against the Sharif family in the long-drawn case – had collected further incriminating evidence relating to Hudaibiya Paper Mills, “NAB cannot be debarred/restrained from proceeding further with the investigation.”

The JIT, in its report, had recommended that the Hudaibiya Paper Mills Case should be reopened.

Based on this recommendation, the Court in its July 28 verdict in the Panamagate case had asked the bureau to reopen the case while it filed references in other cases.

However, it had also questioned the role of NAB, which had seemingly favored the Sharifs in the Hudaibiya Paper Mills case by not challenging LHC’s decision to quash it.