Recently, Abu Dhabi National Oil Company (ADNOC) launched the second competitive bid round for new licensing of the oil & gas exploration, development, and production rights in Abu Dhabi which closed on December 31st, 2019. To take full advantage of this opportunity, a consortium of major E&P Companies of Pakistan, PPL, MPCL, OGDCL & GHPL, participated in the bidding.

Five blocs of reserves were announced for the said bidding round, out of which three are offshore and two are onshore. The bid round offered the opportunity for new international partners to join ADNOC in exploring untapped resources in one of the world’s largest hydrocarbon super‐basins with a trusted and reliable investment environment having sound fiscal regime.

ADNOC is the 12th largest oil producer in the world that focuses on exploration, production, storage, refining and distribution, to the development of a wide-range of petrochemical products. They have been managing the Emirate’s hydrocarbon reserves on behalf of the Abu Dhabi Government for over 46 years.

Pakistan’s oil and gas sector is proficient in the business of conventional gas; however, it still has a lot to learn in handling shale hydrocarbon resources

This participating consortium was led by PPL as an Operator and MPCL, OGDCL and GHPL as Joint Venture Partners (25% working interest each). They submitted their bid for Offshore Block‐05 based on independent evaluation / due‐diligence. This is the first time in the history of Pakistan that such a consortium has been formed and submitted a joint bid in an overseas bidding round.

A consortium of 4 Pakistani companies is bidding for "Concessions" & "Bloc" in UAE under its new policy! Gen. Ishfaq Nadeem, CEO MPCL, explains, Informative Discussion for media & CSS aspirants! Must Read! https://t.co/jxuYCfVKln via @@GVS_News

According to MD MPCL, Lieutenant General Ishfaq Nadeem Ahmad in an interview with Dr. Moeed Pirzada, ‘This is a project worth 350 to 400 million dollars, spread over several years. The purpose is that we venture into a market that is outside Pakistan – regional market’.

He believes that an international venture does not only place Pakistan’s oil and gas sector on the global forum, but also brings in two kinds of rewards. Firstly, given that definite discoveries already exist, offshore projects bring up opportunities to tap them with our finances and manpower; and secondly, it allows our geologists to conduct seismic surveys outside of Pakistan to discover and explore unacknowledged hydrocarbon reserves.

According to MPCL Company Secretary, Asad Rabbani, in the current bid of Abu Dhabi gas blocks, offshore Block‐05 has an area of 6223 km² located in the northeast offshore of Abu Dhabi. The block is located in shallow water – around 5 to 30 meters deep – and includes around five more discovered but undeveloped fields with substantial oil potential for appraisal and development. In addition, multiple leads are also present in the block. 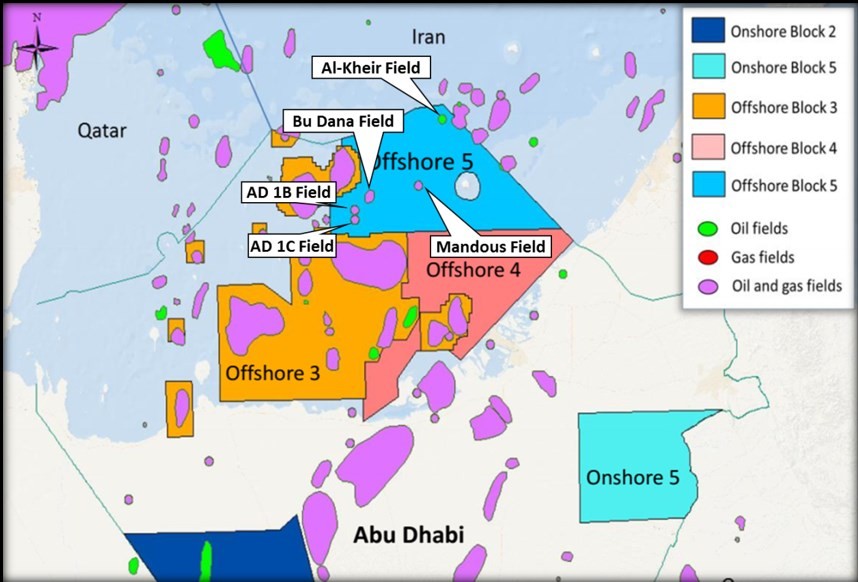 As per the estimates, the production is expected to commence at the pre‐existing undeveloped blocks at a rate of ~ 25000 barrels a day, starting in 2024. Asad Rabbani also believes that once this production finds consistency, the venture will become self‐sufficient to sustain its operations for a long time. In fact, soon after, the gas blocks are anticipated to generate foreign exchange for the country.

To explain the forwarding steps, in the interview with Moeed Pirzada, General Ishfaq revealed that in case of Pakistan’s success in the bid, a Production Sharing Agreement (PSA) will be signed with ADNOC, allotting them 60% production rights as per UAE policy. This leaves 40% ownership for the bidder consortium at home and Ishfaq believes that a successful operation in the Abu Dhabi field is bound to accelerate Net Foreign Exchange inflow in Pakistan. Moreover, it will help secure long term energy security for the country that leaves out future generations at peace.

A continuous international operation will allow human resource exchange between the countries – this will further help improve our manpower’s expertise in the oil and gas sector and bring forth capacity-building experiences. Pakistan’s oil and gas sector is proficient in the business of conventional gas; however, it still has a lot to learn in handling shale hydrocarbon resources. General Ishfaq thus believes that an inflow of foreign investments will play a vital role in training our E&P companies in the logistics of shale resources. (Shale gas is natural gas produced from shale, a type of sedimentary rock).

This enables our industry to act as a ‘one stop shop’ for energy storage. Pulling this of gives us complete control over the oil and gas operations in the country and can eventually cease our dependence on hydrocarbon imports. However, all this must be done within the bounds of an increasingly crowded competitive landscape.

A successful undertaking in Abu Dhabi’s oil fields will also help Pakistan improve bilateral relations with UAE in the long run, opening up the potential for investments from UAE in Pakistan’s mid‐stream (exploration and exploitation) and down-stream (production and distribution) oil and gas sector. Hence, winning this Abu Dhabi bid can make a big impact on improving Pakistan’s economy in the next decade.

MPCL: The significance of UAE oil and gas blocks

Workers protest in Qatar over unpaid wages amid pandemic

AFP - May 30, 2020
Migrant workers staged a rare protest in Qatar over unpaid wages, the government said Saturday, at a time of economic fallout from the coronavirus...

Unlawful killing of the black people exists in 21st century

George Floyd’s murder: Violent protests spread across the US