MQM and PTI are terrorists: Bilawal 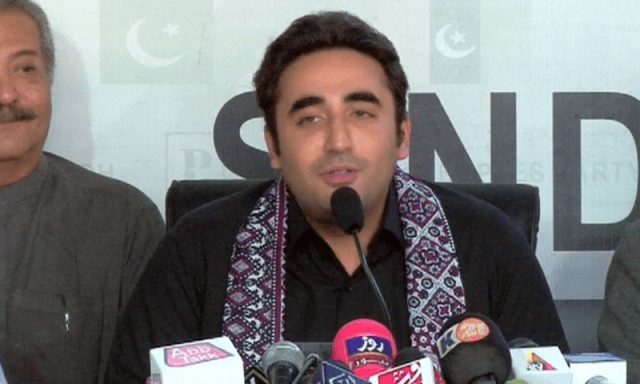 The Peoples Party Chairman Bilawal Bhutto Zardari on Wednesday said that the Pakistan Tehreek-e-Insaaf were “friends of terrorists” and called the Mutahida Qaumi Movement-Pakistan a “terrorists’ party”. He also chastised both the parties’ founders for spreading ‘politics of hatred’.

Bilawal also challenged Imran Khan to contest the next general elections from Karachi. He said Imran Khan will taste an “exemplary defeat”, further adding that the people of Karachi had already experienced politics of hatred for decades under MQM and they would not fall for it again.

“We don’t want another Altaf Hussain, so we will not let Imran Khan win”, the PPP chief said, calling Imran Khan a ‘friend of terrorists’. Without directly accusing the MQM-P, he called it the ‘terrorist party’ and mentioned that Adullah Murad, a PPP MPA who was shot dead after elections in Karachi in 2002, was a hero. His murder was described as a target killing by a senior police officer.

Pakistani politics can be unpredictable. Few could have foreseen that half a dozen MPAs from the MQM-P would vote for PPP candidates in the senate elections, despite calls by their leaders for unity within the party.

It can be argued that the Pakistan Peoples Party is the real winner in the recent senate elections. It was no surprise that the PML-N won the seats in the Senate from Punjab, their traditional stronghold. The PML-N won more seats than PPP (15 to 12) but the PPP unexpectedly won two seats from KP, a fact the PTI chief labeled as an ‘electoral farce’, accusing the PPP of horse trading. Furthermore, six MPAs from the MQM-P voted for PPP candidates in the Senate elections, resulting in the whitewashing of MQM-P.

Farooq Sattar also accused the PPP of horse trading. The previous chairman senate, Razza Rabani, was also from the PPP and the now former PML-N Chairman Nawaz Sharif has also said that he supports Raza Rabbani for senate chairman. Sharif has since qualified his statement, by saying that he said he supports Rabbani to avoid horse trading.

Currently, the breakdown of seats in the National Assembly by parties is as follows: PML-N 189, Pakistan Peoples Party 47, Pakistan Tehrik-e-Insaf 32, Muttahidda Qaumi Movement 24, Jamiat Ulama-e-Islam 13. All other parties have 5 or less than 5 seats in the National Assembly. In the 2014 general elections, the Pakistan Tehreek-e-Insaf made gains as Pakistan Peoples Party lost seats it had won in the 2008 general elections.

PTI had boycotted the 2008 elections whereas PPP had won the most seats with 119 Parliamentarians. In 2014, the PTI garnered 7.5 million votes and established itself as a major player in Pakistani politics. Bilawal’s recent statements come against the backdrop of Pakistan Peoples Party winning not only more seats than the PTI in Senate elections but also gaining two seats from the PTI stronghold of Khyber-Pakhtunkhawa.

It can be argued that the Pakistan Peoples Party is the real winner in the recent senate elections. It was no surprise that the PML-N won the seats in the Senate from Punjab, their traditional stronghold.

The Pakistan Peoples Party leadership is aware that they can expect to win votes from interior Sindh and to a considerable extent from Karachi as well. Now, however, the PPP seems to be targeting Southern Punjab under Bilawal’s leadership with his pro-working class rhetoric. On International Labor Day last year, Bilawal paid tribute to the ‘tilling and toiling’ classes of the country. On other occasions, he has said that the Pakistan Peoples Party was the party of the poor and the working class. He has also said that his party is the sole representative of the working class while praising the labor policy of the PPP government.

Southern Punjab is among the poorest regions of the country. It consistently ranks below other regions in terms of wealth per capita, education and health indicators, as shown in a report by the Bureau of Statistics in Punjab. All three division of South Punjab-Multan, Bahawalpur and Dera Ghazi Khan-ranked at the bottom in terms of economic indicators, according to a report by the Institute of Public Policy in Lahore. This is where the PPP will aim at making inroads in the next general elections.

The result of the recent Senate elections is a sign for PPP leadership that their message is resonating with at least some sections of the population. That’s probably the reason why Bilawal has opted for a more confrontational rhetoric, whereas previously he was more reserved.

Pakistani politics can be unpredictable. Few could have foreseen that half a dozen MPAs from the MQM-P would vote for PPP candidates in the senate elections, despite calls by their leaders for unity within the party. The PTI after having boycotted the 2008 elections, managed to form a government in a province of 30 million citizens. Similarly, the PPP won two seats in the Senate from Khyber Pakhtunkhawa where the PTI is generally considered to be popular. As we race towards the elections, we can expect the war of words between political leaders to continue as the major parties seek to best each other.