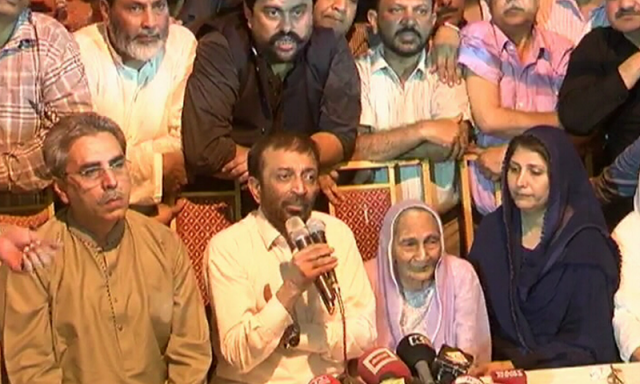 Farooq Sattar has been elected as the Muttahida Qaumi Movement-Pakistan (MQM-P) convener in the intraparty elections held on Sunday. The elections were held by Sattar’s PIB faction and the Bahadurabad faction didn’t participate in it. Sattar secured 9,433 votes to become the convener once again after he was deposed by the MQM-P Rabita Committee. The polling was held at Karachi Metropolitan Corporation (KMC) ground, to elect members of the new Rabita Committee and Central Executive Council.

The Bahadurabad faction declared the elections illegal and alleged that they were a condemnable effort to divide the party. “The Rabita Committee, alone, can make policy decisions,” said a statement issued by the Bahadurabad faction of the MQM-P. Kamran Tessori, Ali Raza Abdi, Muzamil Qureshi, Abdul Waseem, Shaikh Salahuddin, Sohail Mansoor, Shahid Pasha, and Qamar Mansoor were elected as members of the party’s coordination committee.

A divide was created between the MQM-P ranks after Farooq Sattar and the Rabita Committee failed to agree on the nomination of candidates for the upcoming Senate elections on 5th February. Sattar insisted on nominating Kamran Tessori on one of MQM-P’s Senate seats in the upcoming elections but other members of the Rabita Committee didn’t agree since Tessori was surpassing senior members. The MQM-P is now openly divided into two factions: the PIB group (lead by Farooq Sattar) and the Bahadurabad group (lead by Amir Khan).

While efforts for reconciliation were made from both camps, they failed to bear any fruit. The Rabita Committee, in an attempt to appease Sattar, relinquished its power to nominate candidates for Senate elections but Sattar insisted on nominating Tessori, whom majority of the party considers to be a newcomer. On 11th February, the Rabita Committee had announced to remove Farooq Sattar as the party convener after leveling a number of allegations against him. In response, Sattar announced to dissolve the whole Rabita Committee and called fresh intra party elections to elect new party leaders.

Political experts believe that public support is a reliable strategy to create pressure against any opposing groups and coerce them into meeting your demands.

The disgruntled leader of MQM-P, Farooq Sattar, posted a video message on his Twitter account in which he appealed to all MQM workers in Karachi, Hyderabad, Sukkur, Nawabshah, Mirpurkhas, Dadu, Badin, Thatta, Khairpur, Shikarpur, Gotki to come forward and participate in the elections. “The rift in the party can only be resolved with these elections. Just like the party was saved on August 23, the February 18 intra-party elections will rescue the party,” Sattar said, expressing hope in the party.

“I have an unblemished 35-year-long political career. I put this fact before you and ask you to place your trust in me. I will not disappoint you. We will be ready for the 2018 general election; we will mend this rift between the party and will never look back. We will win back all our seats with pride and honour,” he claimed in the video message. Even though Sattar appeared hopeful about the future of his party, the reality of the situation is very different. Rather than bridging distances, the intra party elections held by Sattar’s PIB election have created even further gaps.

The Bahadurabad leadership has declared the elections illegal and did not participate in them. Both PIB and Bahadurabad factions of the MQM-P claim to be the rightful leaders of the party. Media reporters and MQM workers are confused as to whom they should follow. If none of the factions relinquish their claims of the party leadership, the official divide in the MQM-P will become inevitable. Some news analysts believe that Sattar is living in a fool’s paradise since an election held without taking the old Rabita Committee members into confidence would do the opposite of the intended purpose.

Political analysts state that Sattar’s ego doesn’t allow him to surrender the position of the party’s convener and he has been isolated by the rest of the senior party leadership. Sattar is a political heavyweight and his rift with the remaining party leadership would leave huge cracks that would greatly weaken MQM in the general elections. The power of nomination of candidates for the Senate elections is in the hands of the Rabita Committee and Sattar apparently lacks any real power to influence that relationship.

In such a desperate situation, a beleaguered Sattar resorted to the only refuge that any popular but powerless leader has: public support. Sattar is using the same tactic as deposed Prime Minister Nawaz Sharif, who has held a large number of public gatherings following his disqualification by the Supreme Court. Political experts believe that public support is a reliable strategy to create pressure against any opposing groups and coerce them into meeting your demands.

Ultimately, MQM-P is a political party and public support is the primary need of every political group. If Sattar manages to prove that the vote bank of MQM-P is behind his back, he might be able to oblige the Rabita Committee into accepting his leadership. Even if he fails to compel them, it is certain that the MQM-P will be divided into further groups. The only possible way out of the situation is for one of the factions to accept the other’s demand and abandon their own claims.