MQM-P lawmaker tries to kill herself 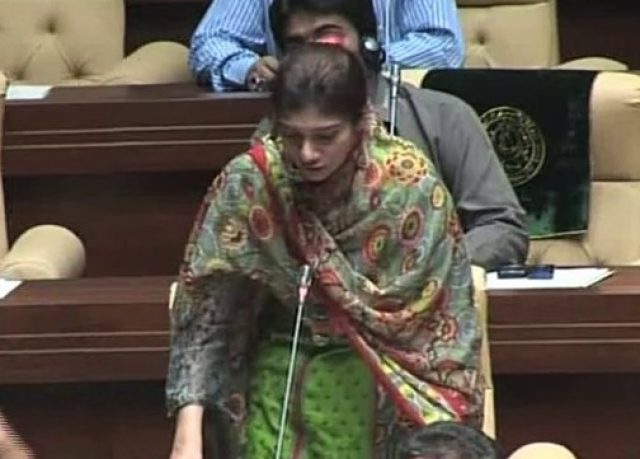 Shazia Farooq, Member Provincial Assembly of MQM-P, attempted suicide on Monday by excessivley taking sleeping pills. She was rushed to the Abbasi Shaheed hospital where she was treated and is now in stable condition. Soon after her admission to the hospital, MQM-P leaders began visiting the hospital to inquire after her health.

It was not immediately clear as to why she may have wanted to kill herself. However, a suicide note left by her was discovered. In the note, she swore not to have taken any money for her vote in the senate elections. “I have been subjected to baseless allegations”, she wrote. “I have no endurance for it.”

Shazia Farooq had been under scrutiny by her party for voting for a Pakistan People’s Party candidate in the senate elections. For defying party orders, she has been heavily criticized by the party leadership. MQM-P leader Farooq Sattar said that besides Shazia Farooq, five other members of his party were being given show cause notice for violating party dictates. The MQM-P was whitewashed in the March 3 Senate elections, as it lost all seats. If all MQM-P MPAs had voted for nominees from their own party, MQM-P would have won at least 3 seats in the Senate.

The inner disputes within the party are said to be the cause for their losing the election. Farooq Sattar refused to accept the decision made by the Rabta committee to nominate Kamran Tessori on one of the four MQM-P seats in the Senate. After the results of Senate elections became public, the MQM-P chief accused the PPP of massive horse trading.

The party has failed to maintain a united stand over issues such as senate tickets before as well.

“Our female and male MPAs, both were subjected to such attempts [of horse-trading]…some of them arrived to the assembly in the same car as two PPP MPAs, went to the chief minister’s chambers, then went to cast their votes and were then sent on their way,” he alleged in a press briefing to the media.

It is against the backdrop of allegations of horse trading and rising tensions within the ranks of various parties that Shazia Farooq has voted for a PPP candidate instead of one from her own party. It is safe to assume that division within the ranks of MQM-P is the sharpest in any political party. The party has failed to maintain a united stand over issues such as senate tickets before as well.

Some politicians in Pakistan have called on the Chief Justice of the Supreme Court to take notice of anomalies in Senate elections, as the seats won by parties is not proportional to their representation in provincial and central legislatures. PPP was able to win two seats from K-P, despite having only seven parliamentarians, a fact lamented by PTI leader Imran Khan. Khan also accused the PPP of horse trading, arguing that this was ‘electoral farce’.

After every senate elections in Pakistan, allegations of horse trading are bandied about left and right. This is not new. Before the senate elections in 2015, the government drafted an ‘anti-horse trading’ amendment to the constitution. It’s not only the senate elections. During voting for members of national assembly, parties accuse each other of horse trading as we witnessed in 2011 with PML-Q’s unification bloc. After the 2008 elections, PPP joined hands with PML-Q (whom PPP chairman Asif Ali Zardari had referred to as Qatil league) to form the government in Baluchistan. The enemies of today can become political allies tomorrow in the ever changing political landscape of Pakistan. Allegations of horse trading, meanwhile, tend to continue unabated.

Other than the suicide note by Shazia Farooq, there has been no statement as of yet by her. Doctors have said that the dose of sleeping pills she consumed was not lethal and she is on the road to full recovery. She may be able to further clarify the extent of horse trading or the lack thereof during senate elections this time around.

Future of PTI’s government: Will the Opposition be able to bring in-house change?

Who is Deputy Chairman Mirza Muhammad Afridi from Ex-FATA?