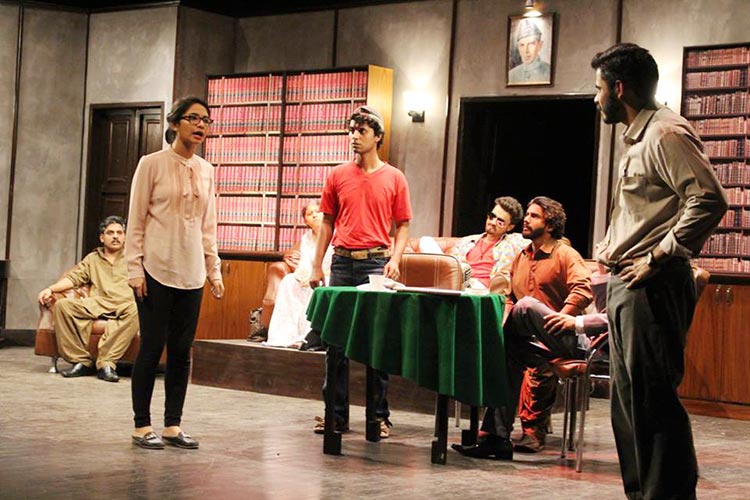 The newest play by Stage Nomad Productions has taken Karachi’s theater goers by the storm. Mulzim Ya Mujrim, directed by Syed Meesam Nazar Naqvi, is an adaptation of Wusutullah Khan’s adaptation of the 50s Hollywood classic 12 angry men on BBC Urdu

For those of our viewers that are unaware of the original film, it revolves around the interactions between a couple of jurors trying to figure out whether a murder of a man was caused by his own son. Through the story, we see how the proportion of those who think the boy is guilty to those who think he does not keep changing as they argue.

Seeing as it seems like everyone is talking about the play in question in Karachi, Global Village Space had a conversation with one of their founder-members and managers, Pireh Shafiq. Pireh is a student of the Institute of Business Administration and has been involved with several of the projects Stage Nomad has been invested in. Let’s get right into it:

Global Village Space: Hello Pireh, we’re very happy to be conversing with you, and wish to congratulate you and your colleagues on the launch of your new play!
To start off with, we know that you are a founder member of Stage Nomad, so could you tell us a little bit about it? In other words, what inspired you guys to launch it, and what keeps you going?

Pireh Shafiq: Thank you for writing about us. Founding members of Stage Nomad including myself were all part of IBA Dramatics Society for over three years and we had grown very close and attached to the theater.
We had noticed that this field wasn’t taken very seriously in our country let alone just Karachi and we really wanted to promote it just not for all the talented actors but also for those who want to pursue acting as their career but cannot since there aren’t enough profitable opportunities and most of them face financial constraints to meet their needs.
We came up with the idea of “Stage Nomad” as we were all “Nomads” in the theatre industry moving around from here to there looking for the right opportunity to tap and luckily we got great support from students of all well-known universities in Karachi such as SZABIST, Karachi University, Habib University and NAPA and Arts Council as well!
It has been a tough journey for us to find the right finances and investment for our venture but its all worth it. It feels really good to work for something you’re passionate for and not just make your profession and career all about corporate “slavery”. We hope to stick to our mission of “Play your part” to revive theater in Pakistan.

GVS: We’re glad you guys have begun seeing the fruits of your hard work! As a group based in Karachi, do you feel that the city has been an obstacle to the work done, or does the city compliment the work you do?
PS: We staged our previous play Wakeel Sahab in Lahore and Islamabad also but definitely the audience in Karachi is way more responsive to the theater even though Lahore is said to be the city of art and culture. It was really surprising to see a better response in Karachi.
Actually, the thing is that people in Pakistan haven’t yet accepted theater as a form of quality entertainment and people need more education towards it. I think all of us should highly promote this industry.
GVS: Yes, it must be promoted indeed! Some have argued that Pakistan’s quality of theater performance has actually deteriorated over the years. As a group mostly comprised of relatively young people, do you struggle with being taken seriously by the comparatively older theater enthusiasts – who had perhaps been members of the era in which plays were more mainstream?

PS: I wouldn’t say that it has deteriorated. It has definitely evolved over time just like everything else. We have moved towards more contemporary stories, we try doing classical plays as they are appreciated more.
We have much more experienced competitors in the industry who have been doing really well but we have never really faced any rivalry from any of them and being a start up and a group of young theater enthusiasts we have been supported by the corporate sector of our country quite a lot.

GVS: Alright, so now that we’re talking about contemporary plays, let’s talk about Stage Nomad’s latest work. The marketing for your new play describes it as an adaptation of the 1950s Hollywood classic 12 angry men. To what extent does the plot draw inspiration from it, and just as importantly, what sets it apart from the movie?

Read more:  Why you should watch ‘Fate Of The Furious’

PS: Mulzim Ya Mujrim is an adaptation of 12 angry men by Wusutullah Khan from BBC Urdu.
According to our director Meesam Naqvi the theme of the play is same as the movie but the backdrop of the play and setting of the play is not the US its Pakistan, the great thing about this play is the universal theme of how justice should be achieved, whenever we judge anyone we judge it with our experience but truth is always different, like one of the jurors sees his own child in the defendant and so he judges him by his experience which he had with his child.
The 1950 movie was based on a theater play by Reginald Rose so we didn’t take inspiration from the movie, instead, we had the play in our hand. We didn’t direct the play according to the movie and the directorial choices they made in the movie are different and on the other hand, our director’s choices are different.
The characters are different and their motivations, intentions and their emotional states are also different.
Plus adaptation means the theme and the conflict of the play remain same but the context including the country, culture, behaviors etc change accordingly. For example, justice is a word but it has different meanings in the East and West or for Christians or Muslims. So the overall concept remains constant but the characters’ motivations change because of differing cultures.
The director tried his best to present the theme in our setting we want the audience to have a local feel to it so we tried to present our characters like they are not from America or another planet even, the audience should feel that they can relate to the characters.

GVS:  That is an interesting learning objective indeed, especially keeping in mind the current roller-coaster of ride Pakistan’s justice system is going through. As the last question which our readers from other parts of Pakistan may be thinking: is the team going to tour other cities any time soon?
PS: We definitely plan to. We are even trying to perform in another country as well, let’s see how it goes.
GVS: And we look forward to attending it when it does come out. We bid you and your team good luck for your future endeavors. Thank you for talking to us!

The play is currently being performed at Arts Council, Karachi, and will continue to be played there till the end of the month. We recommend our viewers in Karachi to go check it out if they can.

Avengers will travel back in time: Fourth sequel reveals