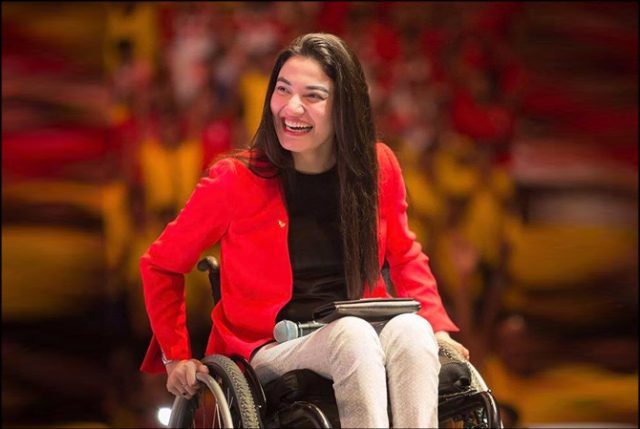 Karic Foundation in Serbia recently awarded Muniba Mazari, a UN Goodwill Ambassador to Pakistan, in recognition of her services to her people and her country Pakistan.

In the end, a little more kindness and a little less judgment is all we need to make this world a better place to live!
Thank you #TimesOfYouth #KaricAwards https://t.co/vNg7A79Qgi

In her Facebook post, she said, “Thank you Serbia and #KaricFoundation for acknowledging the efforts and thank you for giving this huge honor! #karicawards.”

All her admirers and followers swarmed her social media with warm messages of appreciation and love.

Muniba Mazari after receiving the award also took the stage to sing a patriotic song ‘Dil se Mainay Dekha Pakistan’ to express the love for her country.

Mazari has been earning international recognition for her efforts and services. In 2015 she was featured in ‘100 Women BBC’ and later in 2016, she was included in the list of ’30 under 30 Forbes list.

She is largely known as a motivational speaker. This Iron lady of Pakistan has delivered powerful speeches at TEDx, Entrepreneurs Organization (EO), Young Presidents Organization (YPO), and many other events and organizations.

Muniba Mazari was married at the age of 18 on her father’s will but her life took a drastic turn after she was involved in a deadly car accident at the age of 21.

In the accident, she suffered multiple injuries also permanently losing her ability to walk again. Severe fractures in the backbone caused her life-long paralysis.

Despite physical challenges, the lady continued to persevere and then emerged as a painter, TV host and a motivational speaker.