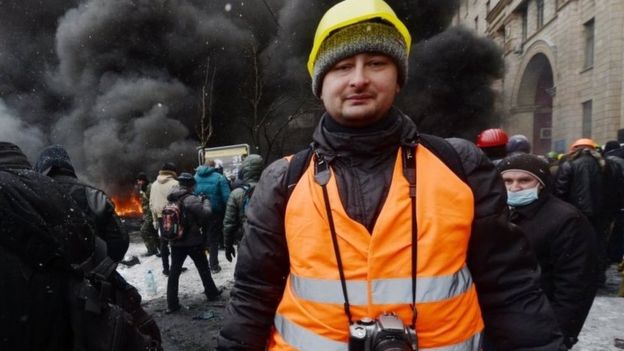 Russia’s embattled liberal community was reeling Wednesday from the murder of fiercely anti-Kremlin journalist Arkady Babchenko who was gunned down in Ukraine after leaving Moscow following a campaign of harassment.

A prominent Russian war correspondent, Babchenko, 41, was murdered on Tuesday evening in a contract-style killing in the stairwell of his building in the Ukrainian capital Kiev where he moved last year.

He was found bleeding and died in an ambulance en route to hospital.

The journalist was killed less than a month after President Vladimir Putin was inaugurated for his fourth Kremlin term and as Russia gears up to host the World Cup later this month.

Read more: Kremlin is monitoring the wealth of Russian Officials

Babchenko was shot three times in the back, his killing reminiscent of that of another prominent Kremlin critic, politician Boris Nemtsov who was gunned down near the Kremlin in February 2015.

Babchenko fought in Russia’s two Chechen campaigns in the 1990s and early 2000s before becoming a war correspondent and author. He repeatedly said he faced death threats.

The toxic homeland is continuing to kill, poisoning the world already outside its borders

He contributed to a number of media outlets including top opposition newspaper Novaya Gazeta and had become an avid blogger, accusing Russian authorities of slaughtering Kremlin critics and unleashing wars in Ukraine, Syria and elsewhere.

His increasingly bombastic posts constantly pushed the boundaries of good taste and some of his colleagues and followers stopped reading him in recent years.

Pro-Kremlin supporters launched a campaign of intimidation and harassment against Babchenko after he wrote on Facebook he was not sorry when a plane transporting a Russian military choir crashed into the Black Sea en route to Syria in December 2016.

Natalia Gevorkyan, a prominent Russian reporter who now lives in France, said the situation was becoming so bad that the European Union and the United States should help protect people fleeing persecution in Russia and facing death threats.

Babchenko’s murder triggered a huge outpouring of grief among liberal Russians who said he was killed because of his profession.

“Arkasha would shoot straight from the hip every day in such a brazen manner that even those close to him felt uneasy sometimes,” wrote Pavel Kanygin, a journalist for Novaya Gazeta, referring to his friend by his nickname.

“This is a terror attack against the journalism community both in Russia and Ukraine. The killers attacked all of us by choosing the most sincere, noisy and brave one, the one who is in the public eye.”

“He did not mince words,” the award-winning publication said in an editorial.

Novaya Gazeta has lost a number of journalists over the past years including Anna Politkovskaya, gunned down in the stairwell of her Moscow apartment in 2006.

“The toxic homeland is continuing to kill, poisoning the world already outside its borders,” wrote Sergei Medvedev, a professor at Moscow’s Higher School of Economics.

Natalia Gevorkyan, a prominent Russian reporter who now lives in France, said the situation was becoming so bad that the European Union and the United States should help protect people fleeing persecution in Russia and facing death threats.

Babchenko was the second Kremlin critic living in Kiev to be killed in less than two years.

Pavel Sheremet, a dual Russian and Belarusian citizen, died when his car exploded in the city centre in 2016 in still unexplained circumstances.

Ukrainian police said they suspected the crime was linked to his work.

Babchenko left Russia in February 2017, living first in the Czech Republic, then Israel, before moving to Kiev.

He had hosted a programme on the Crimean Tatar TV station ATR for the past year.

Vigils in memory of the slain journalist were planned in Russia and Ukraine on Wednesday.

Iran is Master of its own: Bypasses uranium limit amid severe sanctions