Musharraf wanted to hand over Dr. Qadeer to the US: Ex-PM Jamali 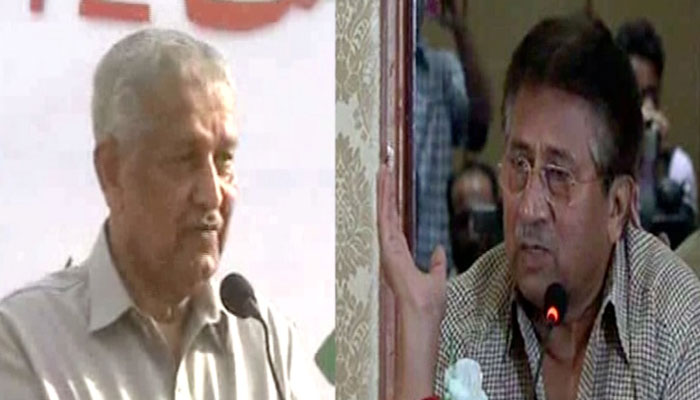 Zafarullah Khan Jamali, Ex-Prime Minister of Pakistan, claimed that Gen. Pervez Musharraf, ex-President, wanted to hand over famous nuclear scientist and physicist Dr. Abdul Qadeer Khan to the US. Dr. Qadeer is generally considered to be the architect or force behind Pakistan’s nuclear bomb.

Jamali told the interviewer that he objected to giving in to US pressure and this became the principal reason for the fallout between him and the military ruler. He also claimed that Gen. Musharraf wanted his own image on currency notes.

Zafarullah Jamali made these startling claims while being interviewed by prominent TV anchor Waseem Badami on ARY News. He described his political history from days of Gen. Zia onwards and how he had been selected by Gen. Musharraf for the post of Prime Minister. He then explained, in response to the Anchor’s questions, how his position on several issues lost him Musharraf’s favor, which ultimately led to his resignation.

Jamali also said that giving a TV broadcast license to GEO TV, then during the Musharraf era, was a mistake. He explained that GEO was granted a license, in relaxation of cross-media ownership restrictions, because Sheikh Rasheed, Federal Minister for Information and Broadcasting, interceded on behalf of Mir Shakeel-ur-Rehman, owner of Jang Group of Newspapers, to grant the media mogul with a broadcasting license. He told the interviewer that Sheikh Rashid once brought Mir Shakeel ur Rehman, owner of Jang & Geo Group to see him.

Sheikh Rasheed, former Information minister of that era, is now a vocal critic of GEO yet, even before Jamali’s interview, the fact that Sheikh was instrumental in granting GEO TV a broadcasting license from within Pakistan, was well known in media circles. Rasheed himself has admitted to his role on multiple occasions. Geo started its broadcasts, as a satellite channel, from Dubai in August 2002. ARY was the first private Pakistani satellite channel that started its operations in 1999/2000 first from London and then moved to Dubai.

While Sheikh’s role in granting GEO its broadcast rights, relaxing the cross-media ownership restrictions was well known, the nature of allegations Jamali has leveled against Gen. Musharraf are quite startling and it remains to be seen how the former President responds to them. GVS tried reaching out to Gen. Musharraf for a response but was not successful.

Previous articleOnly solution to Afghan problem: US Withdrawal
Next articleBilawal in KP while Imran targets PPP heartland in Sindh.

26 July 2021
Previous articleOnly solution to Afghan problem: US Withdrawal
Next articleBilawal in KP while Imran targets PPP heartland in Sindh.

Let’s not damage a national icon: An Uncertain future of PTV!